It’s no longer enough to be expensive, rare and old in the luxury spirits marketplace – The Spirits Business examines how brands are reconceptualising the super-premium-plus category, with many taking cues from the ‘craft’ craze. 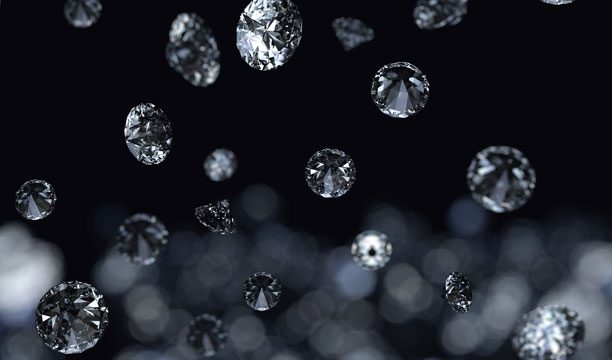 When Compass Box released its ‘This is not a luxury whisky’ expression late last year, the Scotch whisky bottler openly questioned the very segment in which it was targeting growth. At £150, the whisky was Compass Box’s most expensive bottling of 2015 and was inspired by Belgian surrealist artist René Magritte’s 1929 concept artwork, The Treachery of Images.

The piece – an image of a pipe featuring the words ‘Ceci n’est pas une pipe’, or ‘This is not a pipe’ – refers to the fact that the painting itself, however realistic, cannot be smoked. Similarly, the provocative name of Compass Box’s whisky highlights the fact that the bottle itself is not a luxury spirit – it is simply a vessel.

“The idea was really about encouraging people – both the industry and consumers – to stop and think about what ‘luxury’ really means within the world of Scotch whisky,” says Jonathan Gibson, head of marketing at Compass Box. “Is ‘luxury’ a status conferred by expensive packaging? Is it defined by price point? By the age or rarity of the whisky in the bottle? Or is it attributable to something altogether more elusive? It was never intended as an answer to those questions – more as a discussion point around which people could talk and make up their own minds.” 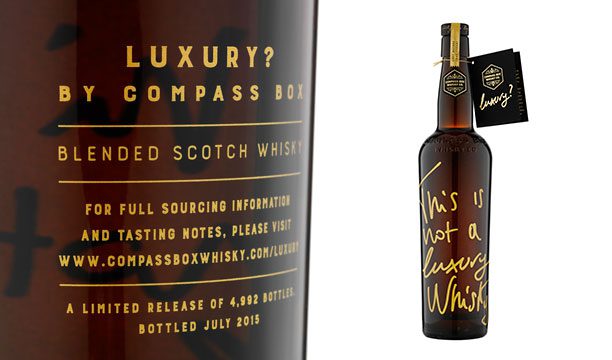 A stalwart in the luxury spirits category, Scotch whisky once looked to the reliable tropes of age, price, packaging and rarity to communicate its premium credentials. Now, as the high-end whisky consumer becomes a more interested and educated beast, less likely to be seduced by flashy bottles and unproven claims of exclusivity, and as more categories vie for their fickle attention, the goal posts have moved. Defining and producing luxury spirits is an altogether more complicated task than it was 10 years ago.

“[The] idea of ‘luxury’ is changing, and has been changing for some time,” continues Gibson. “We don’t feel there can be any hard and fast rules defining the term ‘luxury’ – either within the world of Scotch or outside of it.

“For us as whisky-makers it always comes back to the liquid in the bottle, the experience of enjoying the whisky and its flavour. In that respect it has to be a personal thing – it can’t be tied down to age statements, to whether or not the distillery the whisky was sourced from is now closed, to the value the market will pay for it or the packaging the liquid is housed in.”

This altogether more emotive and less quantifiable definition of luxury in spirits was born, in part, of the ‘craft’ craze that continues to sweep across the industry, according to Jared Himstedt, head distiller at US-based whiskey producer Balcones, who says a new set of buzzwords typify the category.

“Craft brands have helped to redefine the perception of luxury,” he says. “It no longer needs to be just about the ‘bling’ but much more about the authenticity, the craftsmanship, and choosing the finest wood and ingredients to create something unique and groundbreaking.

“The definition of ‘luxury’ whisky no longer has to be old and stuffy: it can be contemporary and urban, but must be crafted and presented in a superior way.”
With the majority of ‘craft’ spirits brands priced in the super-premium bracket and with ‘drinking less but better’ consumer trends taking hold in developed markets around the world, it’s no wonder value sales continue to outpace volume in spirits.

According to Euromonitor data, international sales of luxury spirits hit US$15bn in 2015, up from US$11.8bn in 2010. This figure is forecast to rise to US$17.7bn by 2020 with North America, Asia Pacific and Western Europe acting as key drivers. It therefore seems inevitable that the luxury end of the spirits spectrum will become ever more squeezed in the years to come. So how can brands ensure they don’t become lost among the crowd?

For Denis Loennendonker, head of sales at Windspiel Gin, the answer lies in innovation. “You have to look at what isn’t on the market yet or what you could do better,” he claims. “It is of course not easy to enter such a crowded market with a new innovation, but it is doable. For example, we are producing a limited edition barrel-aged gin year by year.”

Kirsten Grant Meikle, director of Prestige at William Grant & Sons agrees, claiming innovation brands can also be prestigious. “Most definitely consumers look for innovation in a prestige product, but they still want to know that the innovation is from true history, heritage and provenance,” she says. 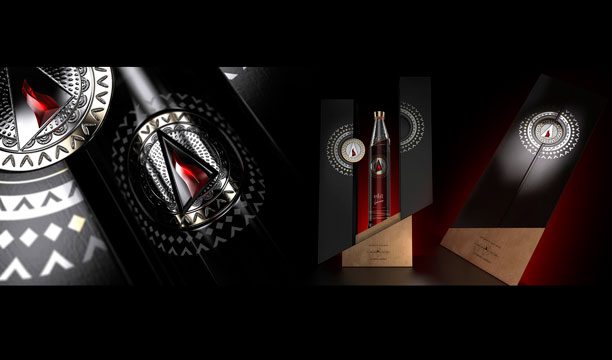 Crispin Reed, managing director of JDO, the company that created designs for the US$3,000-a-bottle elit by Stolichnaya series, believes brands need to better understand their environments in order to thrive, claiming there’s not a ‘one size fits all’ recipe to success in the luxury market. “Ultimately one must consider the people in the market who buy the brand,” he says.

“What constitutes ‘stand out’ for a British  consumer may be different from a Russian or Chinese consumer. And one must not forget standing out in the minds of the ever-so influential bar community, including mixologists.” However, Reed claims that establishing a point of difference in the luxury market is a more difficult endeavour for white spirits than their brown counterparts.

“[Traditionally] white spirits haven’t necessarily had the same associations with heritage and provenance that other spirits sub-sectors have had,” he adds. “However, that has changed significantly over recent years. The level of sophistication when it comes to ingredients, flavours and packaging for example are raising the luxury bar in the white spirits sector.”

While Scotch and Cognac have historically been the mainstays of the luxury spirits scene, attention of high net worth individuals (HNWIs) is now being grabbed by previously under-premiumised categories. “The last few years has seen the growing prominence of other spirits in the segment, including whiskies from Ireland and Japan,” believes Brendan Buckley, global innovation and whiskey portfolio director at Irish Distillers, who cites the group’s €6,000 (US$6,780) Midleton Pearl as an example of its luxury offering. “Overall, super-premium Irish whiskey is under-represented, but this does not mean that there isn’t a demand for luxury Irish whiskeys.”

However it is rum – largely regarded as one of the most under-premiumised spirits sectors – that is forecast to witness the greatest percentage growth within the luxury market than any other spirits category over the next four years (see table). Between 2015 and 2020, luxury rum is expected to increase sales by almost US$230m.

For Stéphanie Labasque, global marketing and commercial director at Groupe BBS, owner of Martinique-based rum brand Trois Rivières, rum may not be a “badge spirit” but it is slowly developing a luxury sub-category.

“For the last five to 10 years the rum market has been growing rapidly and is getting more and more sophisticated – new recipes, new qualities and origins are emerging,” she says. “A prestige segment is arising, even if we do only see this in the on-premise.” Labasque also claims that luxury rum can be particularly rare, even when compared with Scotch and Cognac, as producers “did not keep sufficient aged stock”.

One of the categories most frequently tipped to become the ‘next big thing’ in luxury spirits is Tequila. The industry has seen a vast amount of M&A activity at the super- and ultra-premium end of the spectrum in recent years and brands that have cultivated a dedicated HNWI following are hot property.

In 2015, Patrón followed in the footsteps of the world’s most prestigious Cognac houses by partnering with French crystal maker Lalique to create the US$7,500 Patrón en Lalique: Serie 1. “I don’t think anyone would question that’s a luxury spirit,” states Dave Wilson, global COO and international president at Patrón Spirits International.

“For example, we have seen that Balcones Texas Single Malt sits comfortably alongside high-end Scottish single malts and this is often the product we show consumers who are familiar with the Scotch sector to introduce them to, not only Balcones, but American craft whiskey.” 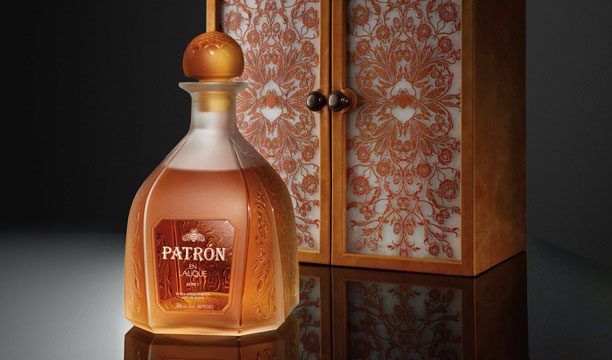 While luxury spirits brands are facing stiff competition from a broader category spectrum than ever before, not all are actively seeking to stand out. “All Cognac brands are not luxury brands, and those that are do not have as their aim to be different from others,” argues François Le Grelle, managing director of Hine Cognac.

“They are luxury brands due to their savoir- faire, tradition, values, history, which has enabled them to position themselves as being luxury and to remain luxury. It is this role that needs to be maintained above all if we are to be different from the others.” From a consumer view, is more clarification around the terms ‘premium’, ‘super- premium’, ‘ultra-premium’, ‘prestige’ and ‘luxury’ needed to give them greater confidence when making purchase decisions?

Indeed, some commentators believe that category segmentation has been blurred through wrongful appropriation by brands. “There is undoubtedly confusion between these categories, in every field, from fashion to spirits through gastronomy or even art,” adds Le Grelle. “With the rise of fast-fashion brands, others found a subterfuge by adopting traditional codes of luxury, therefore blurring the frontier between categories.”

But for JDO’s Reed, too much segmentation could lead to greater consumer confusion. “Personally I have an issue with the definition of super- and ultra-premium,” he claims. “For me, there’s premium, then there’s luxury then there’s ultra-luxury. I think slicing and dicing premium to this degree is dancing on a pinhead and begs the question, where does ultra-premium end and luxury begin?”

A question to which there is not discernible answer in the industry, and one that raises a number of others: do consumers even care about such labels? Have they now become almost meaningless due to overuse in the industry? If every other bottle on supermarket shelf or back bar is ‘luxury’, then is ‘luxury’ in danger of becoming the new ‘standard’? Might the category lose its exclusivity altogether? 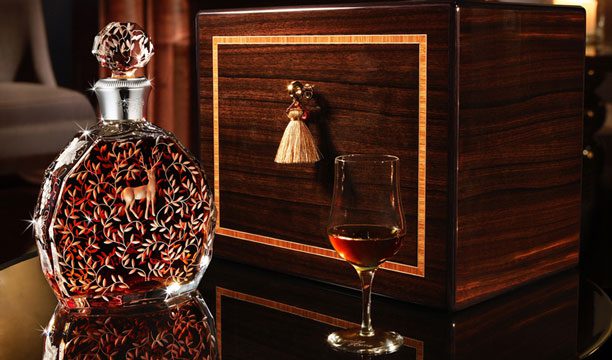 Compass Box’s Gibson believes that while such terms are useful to consumers as “status indicators”, these need to be backed up by “specifics”. Today’s savvy consumer will not settle for marketing fluff, no matter how exquisite that font is.

“Increasingly, consumers want to know more about the produce they’re consuming [and] this reduces the credibility and attractiveness of claims such as ‘prestige’ or ‘deluxe’ because they will increasingly be interrogated,” he states. “For that specific subset of consumers they have become less meaningful – not due to overuse so much as a general shift in attitudes towards a more curious mindset.”

The luxury spirits landscape is certainly evolving in line with complex consumer trends, making it all the more difficult for brands to rely on outdated tropes and align with simple category definitions without question. As Gibson concludes: “If your definition of luxury is tied to price, then that ship has already sailed.”