The Liqueur Masters 2016 attracted more sweet delights than ever, and a diversity across flavours and styles – including fruit, tea, herbs and nuts – which both surprised and delighted our judges.

Sugar levels aside, the global liqueurs segment is a broad church, its lack of definition a strength in terms of creativity. But with freedom of production comes lack of quality guarantees, which can lead to questionable output. For a while, some liqueurs have been a case of “approach with caution”.

It is an inherently tricky category to pin down. Some offerings, by merit of innovation or brand equity, become bartender favourites found in haute cocktail establishments the world over. Others find it tricky to shout through the noise. And against a flattish market, there was little indication before judging day which way these sweet, often viscous samples would lean.

As always, a panel of spirits industry experts was tasked with sifting the outstanding from the mediocre. Gathering at One Canada Square Restaurant in Canary Wharf, London, to sip and consider the sizable liqueurs field were Jamie Kimber, Willem Barentsz brand ambassador; Tobias Gorn, director, Campbell & Gorn; Nicola Thomson, director, Fifteen71; Julie Campbell, wine and spirit consultant; Rui Costa, bartender at Pollen Street Social; and Alessio Franzese, executive general manager at Rum & Sugar, all chaired by myself, Kristiane Sherry. Each sample was assessed blind on its own merit within an appropriate flight, with medals awarded on the basis of appearance, nose, palate, balance, and overall impression.

First to be assessed was a small Floral flight comprising a pair of Silver medallists: Violette from Joseph Cartron and Bertina Elderflower from Malibu Brand Consulting and Investment.

Next up was a Spiced flight with three entrants, two of which kicked off the Gold medals for the day.

“Clarke’s Honey Bourbon Liqueur has a herbaceous character I really liked, and a delicate honey,” Campbell said, while Franzese likened the expression to a brandy. “You just want to put it in a cocktail,” he said – and it duly secured a Gold. Meanwhile, the judges were impressed by the potency and authenticity of the chilli on the Ancho Reyes palate. Summarising, Franzese said: “The first two stood out for their floral properties, but the Spiced liqueurs really performed on taste.” 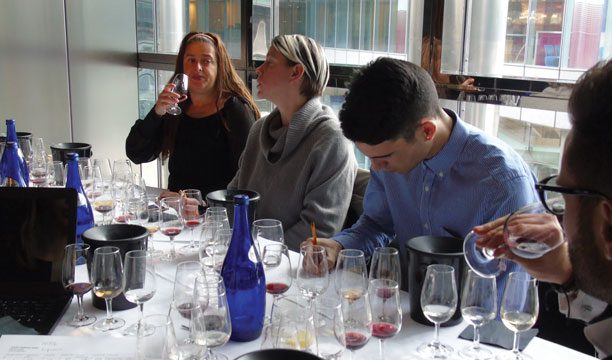 The next flight represented a bumper harvest of Fruit liqueurs, representing mostly stone fruits interspersed with the likes of banana and strawberry expressions. It was a successful flight, too, with five Gold medals and five Silvers awarded.

“Berry flavours tend to smell fake, but Crème de Mûres des Roncières is really good,” said Campbell of the Gold medal- winning liqueur. “The aroma and flavour won out.” Sibling Joseph Cartron product Apricot Bandy likewise secured Gold for its “balanced complexity” and “unusual finish”. The brand’s Triple Sec also impressed, with Costa commenting: “It’s strong on the nose and keeps on through the palate – a nice finish without being too sweet. It will be great for cocktail use.”

The two other Gold medallists were the “grown-up sipping liqueur” Peach from Vedrenne, and Rum Co. of Fiji’s Banana Rum liqueur, deemed “reminiscent of childhood” by Kimber, and “complex, well- rounded and well-balanced” by Costa.

“A decent flight, with good representation of fruit flavours and intensities,” Thomson concluded. “While nothing was overly confected, there was also nothing out of the ordinary.” Costa agreed. “I would like to see something different, to be honest – everything is peach, apricot, dark fruits. But overall it was good in terms of quality.”

Pressing on, the judges entered a surprisingly delightful Cassis realm. While the flight was small, it certainly did not disappoint, attracting two Golds and the first Master medal of the day.

Understandably, the Cassis collection met with high praise. “It was a really good flight and a true expression of what cassis can be like,” Thomson said. “They all actually tasted of fruit!” Gorn concurred: “Good enough to be consumed on their own.” 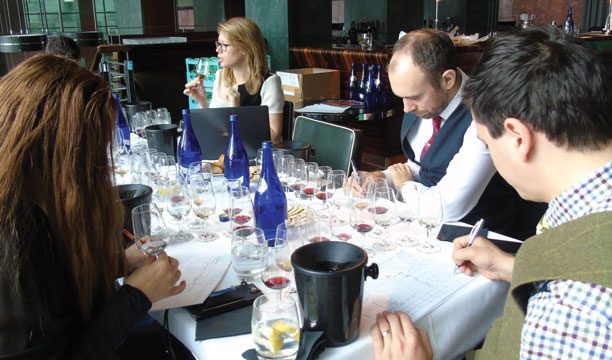 Departing the succulent autumn hedgerow qualities found in the Cassis category, the panel looked to a minuscule Tea flight. The on-trade has become so enamoured with the potential for tea that even mainstream brands such as Jägermeister have embraced the trend. The judges were thus frustrated to find so few entries.

However Joseph Cartron’s Thé Noir Fumé pulled in the praise and picked up a Silver medal in the process. Franzese said: “I like the lapsang souchong they’ve used. If a whisky drinker asked you for a cocktail, you could make something they would enjoy with this.”

Post-tea time, the panel pressed on to a flight of Herbal liqueurs and unearthed a duo which secured a Silver medal each. Sazerac’s Peychand’s Aperitivo was deemed “a lovely example of a bitter orange liqueur”, while Giffard’s Vanille de Madagascar Premium Liqueur was described as “delicious”, with notes of almond and peanut butter.

Departing the herbally sweetness, the panel took a turn into the land of Mint, settling on Giffard’s Menthe-Pastille. The “perfectly balanced”, “really fresh” liqueur was a hit with the judges and duly awarded a Gold.

Following on was a tiny flight of Ginger liqueurs, a highlight of which was Berry Bros & Rudd’s The King’s Ginger. “I like that it was actually gingery without anything artificial,” Gorn said. “It is quite natural, sweet and balanced with touch of fineness – it’s not just sweet for the sake of it.” As King’s Ginger picked a Silver medal.

After Ginger, it was time to explore a flight of Amaretto offerings, and Aldi UK’s Bellucci Amaretto Liqueur immediately impressed. “It has the perfect aroma,” Franzese said. 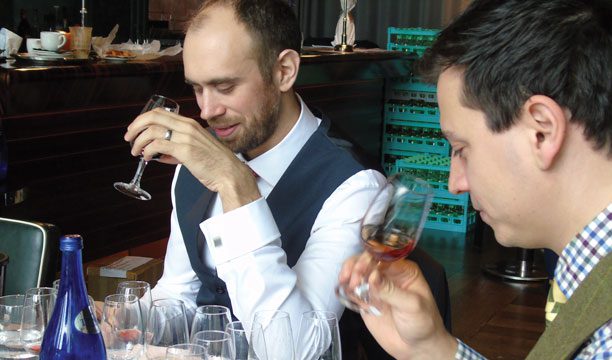 Continuing with the more dessert-like flavours, judges next approached a set of Chocolate liqueurs in a range of varieties and styles. While some were disappointing, three came to the fore, each with a Silver medal: Mozart Dark Chocolate Liqueur, Rum Co. of Fiji’s Ratu Signature Liqueur, and Aldi’s Specially Selected Chocolate Irish Cream Liqueur.

“It smells just like bakers’ chocolate,” said Campbell of the Mozart expression, with Franzese praising the bitterness on the finish which was “reminiscent of coffee”. Costa enjoyed the chocolate and orange combination on the Ratu Signature nose: “It reminded me of Christmas – I loved it.” The panel also praised the “silky mouthfeel” of Aldi’s offering.

“The flight as a whole showed a lot of different styles of chocolate liqueur,” said Campbell, summing up. Gorn agreed, but added a caution that there was a need for producers to “find themselves” and come up with a “really premium, balanced, high quality offer” to fill a gap in the market. Overall, the quality might have been questionable, Costa said, but it was good to see the variety on offer.

The judges next inspected a smaller flight of Coconut liqueurs. Two impressed: Coconut Rum Liqueur from Rum Co. of Fiji and Aldi’s Cocobay White Rum & Coconut liqueur. Both were awarded Silver medals: Rum Co. of Fiji’s offer was described as “clean and fresh on the palate” with a “surprisingly dry” finish, while Cocobay White Rum & Coconut offered “authentic” aromas and a “realistic” flavour. The judges celebrated both styles, and welcomed the increased diversity on offer.

Up next was a bumper group of Cream liqueurs which produced a haul of medals. Leading the charge with the first gold was Amarula Cream from Distell. “I loved the definition of cream and the slightly tropical notes – nothing was too cloying,” said Thomson.

Joining Amarula in the Gold club was Mozart White Chocolate, a liqueur described by Gorn as “exciting, actually”. “I found it balanced and not overly creamy,” he continued, with Thomson declaring it “definitely different”.

But all in all, “I didn’t see as much variation between the different styles,” said Campbell, a disappointment despite the quality of the field. Thomson said: “Obviously you had intense creaminess across the board – in cocktails they would hold up quite well.”

Honing in on the Emerald Isle specifically for an Irish Cream flight, the judges found two further medallists. Aldi Stores’ O’Donnells Irish Cream was deemed “reminiscent of an After Eight mint”, while Feeney’s Irish Cream from Quintessential Brands was praised for its “roasted, fresh, natural touch”. Both secured Silver medals.

“These are exactly what you’d expect for an after-dinner drink,” Franzese said. “They perfectly suit the occasion.” Despite this, the judges questioned the lack of development in the Irish cream category. Can genuine innovation emerge? The formulation of vegan and hybrid products from market leader Diageo suggests so.

Next up for the panel was a small but perfectly formed Nut flight, which attracted a Silver and a Gold medal. Gold went to Soplica Walnut Liqueur, thought to represent “walnut whip” flavours with “a good helping of chocolate”. “It’s the perfect digestif,” remarked Franzese. Silver went to Soplica’s sibling product Hazelnut Liqueur.

The final flight in the tasting was Coffee, and the panel finished on a high with the second Master medal of the day, awarded to the “delicious” Coffee Rum Liqueur from Rum Co. of Fiji. “The coffee was there but there was chocolate and a nuttiness too,” Kimber said. Franzese deemed the product “a perfect representation of a coffee liqueur – if you are a coffee drinker, this is what you want,” he said.

Looking back over the tasting, Thomson felt there was a good overall broad representation. “We had a good range – while there wasn’t anything out of the ordinary, the variation and quality was good.” Campbell agreed, adding that taste alone does not tell the whole story for the multifaceted category. “It is interesting thinking about how you would use them – there was a lot of good quality, too.”

Gorn said he would like to see more liqueurs able to stand on their own or on the rocks, rather than “just” as cocktail ingredients: “Then you can achieve a proper grown-up drink,” he mused.

Click through to the following page for the complete list of medal winners from The Liqueur Masters 2016.