Diverse entries across the latest American Whiskey Masters show there’s much more to the US distilling scene than Bourbon.

Scotch’s sweeter cousin has enjoyed something of a boom of late. While Scotch exports continue to struggle, American whiskey has stepped up to consumer demand, its mixability and “cool” factor wooing style-conscious and connoisseur imbibers alike.

The increased levels of interest had a profound impact on the 2016 American Whiskey Masters too, with a broad spectrum of flavour, raw ingredients, price brackets and styles all represented, delighting our judging panel and ensuring medals aplenty.

Of the nine judges gathered, five took on the American contingent. Stepping up to the challenge were Nagesh Balusu, general manager at Salt Whisky Bar and Dining Room; Greg Dillon, luxury spirits writer and brand consultant; Mark Newton, editor at malt-review.com; and Jolyon Dunn, general manager and buyer at Milroy’s of Soho; chaired by myself, Kristiane Sherry, editor of The Spirits Business.

First up to test our judges’ palates was a small flight of No-Age-Statement Bourbons. The ‘all-American’ whiskey category, some fear it might slip back as other segments – for example rye – press forward. But no fear here, as the panel found the first two medals of the day for ATOM Brands’ That Boutique-y Whisky Company: a Silver for Few – Batch 2 and a Gold for Heaven Hill – Batch 1.

“Heaven Hill – Batch 1 has the balance that really brings out the fruit flavours,” Dunn praised, while Dillon scored it highly for its complexity and “vegetal notes in places”.

Following hot on the heels of the NAS category was another flight of Bourbons Aged Up To 7 Years which similarly delighted – this time egged on by a higher abv. The “bread, brioche” and “interesting dusty leather” notes of Aldi Stores’ Bluegrass Kentucky Bourbon won it recognition in the form of a Silver medal, while La Martiniquaise’s Old Virginia scored solid Gold and was deemed “a great example of a younger American whiskey”.

Sticking with Bourbon but moving on to price segmentations, a pair of Premium expressions were next to be assessed. “There was a real balance of spiciness and sweetness with Old Forester,” enthused Balusu “It has an almost Speyside quality – it’s really great.”

Dillon found Buffalo Trace Kentucky Straight Bourbon equally worthy of praise: “It had that candied fruit, almost tannic nature – a juxtaposition of sweetness and sour fruit undertones.” As such, both were awarded Gold medals.

“They both felt really elegant,” commented Newton. “It’s almost a no brainer in terms
of value – these are great value for money Bourbons.”

Pressing on up the price ladder to the Super Premium bracket, and judges found a “delightful” flight which attracted three Gold medals, and the first Master of the day.

“You start immediately with this vegetal hit, and then these nutty, chocolatey notes,” said Dunn of the Master medal-winning Breckenridge Bourbon. “And also this varnish on the nose which you get with really high- end American whiskeys.”

“It’s nuanced differences that set them apart, but the quality was always stunning,” attested Dunn.

After that stand-out flight, the panel then assessed a tiny Tennessee Whiskey offer, with one solitary sample attracting a Gold medal.

“The cereal and nutty notes for me were really prominent and interesting,” said Balusu of Ole Smoky Straight Whiskey. “It’s a reallyinteresting whiskey and it stands out.” The only disappointment was that there were not more to taste. “There’s absolutely space for more producers in the quite narrow Tennessee whiskey category,” stated Dillon.

From one to many: next came a stellar flight of Single Malt – No Age Statement expressions attracting a tremendous medal haul of four Silvers, one Gold and one Master.

Westland Distillery’s Peated release attracted the top accolade, and drew strong comparisons with Scotch. “On the nose it’s a grassy, earthy note, but an intensely rich one,” assessed Dunn. “It divided the room between Caol Illa and Springbank – stunningly well-balanced.”

“It’s the marzipan and juicy fruit notes that did it for me,” said Dillon, honing in on a different part of the multifaceted flavour profile, while Balusu picked up a peppermint note on the nose, reminiscent of other Scotches.

Westland Distillery picked up the Gold medal for its Garryana expression. “I particularly liked this one – again muted honeycomb, sweet but not offensively so and quite robust,” said Dillon.

Overall judges were “very pleased” with the line-up of single malts. “The flight was massively varied compared to previous rounds,” said Newton, with Dunn commenting that the less regulated production landscape compared to Bourbon meant there was greater scope for experimentation. 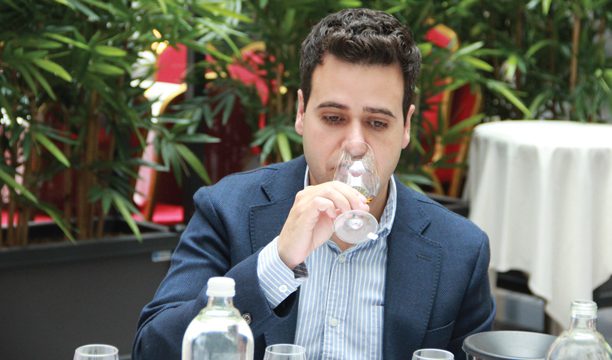 A duo of Single Malt Aged Up To 7 Years came next, with the pair of Rogue Ales & Spirits both scoring Gold medals. Dead Guy Whiskey was deemed to have a “lovely texture” with “bread”, “corn” and “toffee” qualities, while the producer’s Single Malt Whiskey offered “a bit of a candied fruit note with a cereal effect”.

A tiny Single Malt – Premium flight saw a Silver awarded to Breckenridge Dark Arts for its “silky” expression with notes of “orchard fruits” and “air-dried wood”, before judges turned their attention to the small but perfectly formed Single Malt – Ultra Premium category.

“For me, the consistency of Balcones No.1 Texas Single Malt from start to finish was stunning,” declared Dillon. “Lots of toffee, a bit of burnt sugar, heavy oak but in a fun way; and then butterscotch and rounded vanilla. A very, very nice whiskey.”

An intriguing flight of Other Grain – No AgeStatement followed, with Balcones again coming up trumps, scooping a Master for Baby Blue and a Gold for Brimstone.

“It’s a boozy Crunchie bar, with toffee and juicy stewed fruits going on,” said Newton. “It’s Cognac-esque to a degree. Then once you add the water you get this white pepper spice.”

Next up was the rye contingent, a category where consumer interest has been buoyed by Jim Murray’s decision to award his Best Whisky in the World accolade to Diageo’s Crown Royal Northern Harvest Rye. It might be Canadian, but it has certainly increased awareness both sides of the border.

First for our panel was the Rye – Aged Up To 7 Years segment, where Rogue Ales & Spirits’ Oregon Rye Whiskey picked up a Silver for its “grassy” expression, offering notes of “apple, raw syrup and grapefruit”. Similarly, Luxco’s “unusual” and “interesting” Bower Hill – Reserve Rye Whiskey was awarded a Silver for its “cucumber, peppercorn, pepper husk” character in the Rye – Premium category.

“It’s very balanced and opened well with water,” said Balusu. “It’s a very good example of a rye whiskey. On the nose it’s sweet but it’s got those rye characteristics.”

The final round of the session saw the panel tackle Moonshine and Other Unaged Whiskeys, a sector which is capturing the consumer imagination at an impressive pace. The flight on offer did not disappoint, pulling in two Golds and a Silver.

Leading the Gold rush was White Dog Cut No. 4, which was “immediately malty, rich and meaty with a nutty note on the finish,” said Dunn. “It’s a really good quality base spirit to play around with.” Similarly Ole Smoky Moonshine, which offered “nice aniseed, liquorice” notes as well as a “nutty, fruity plate” was awarded a Gold. “It was really fresh and crisp”, noted Balusu.

“The flight showed how moonshine can actually be quite approachable, despite the higher abv,” mused Dillon, with Newton adding the category is “sort of a guilty pleasure”.

Summing up the day, judges were pleased by the level of experimentation and innovation displayed by American whiskey producers. “The market has been dominated by Bourbon but the emergence of great categories, especially on the single malt side, shows what can be done in that part of the world,” felt Dillon.

“I think everyone would agree the value for money on the bottles is outstanding as well,” added Dunn.

For Newton, it’s the freedom offered to American whiskey producers which is fuelling innovation. “Because Scotch is so heavily regulated it’s almost inherently less diverse. This is a blank canvas; producers can get away with more and they should try to.”

Dunn noted that in March 2015, the London-based Milroy’s store sold more Bourbon than Scotch for the first time in its 52-year history. Times are changing. “The market for American whiskey is still quite niche, but if you talk to people and explain to them, they are more open minded than you think.”