A UK hotel group has launched what it claims is the world’s first alcoholic ice cream van, which requires visitors to display their ID cards.

The Ice Cream Bar, described as an “adult only ice cream van”, will travel around the country this summer, offering free alcoholic-flavoured ice creams and sorbets.

Launched by Warner Leisure Hotels, the van is guarded by a doorman, who will check the IDs of visitors to ensure they are old enough to be served.

Products on offer include IcePA, a beer-infused Mr Whippy ice cream poured out of a classic pump and served in a pork scratching cone; The Jäger Bombe, a twist on the classic ice cream bombe that features Jägermeister ice cream covered with a layer of energy drink-flavoured ice cream; Bacon and Bourbon; which is bacon-flavoured ice cream with a crispy bacon garnish and shot of Bourbon to chase; Vodka Martini, a vodka sorbet with olive-flavoured hundreds and thousands; and Tequila Sorbet, a Tequila-flavoured sorbet served in a Martini glass with a rim of salt.

Warner Leisure Hotels launched the van after its research showed that the favourite childhood memories of the over-50s are going to the seaside (75%), eating ice cream (53%) and going to fun fairs (43%).

The ice cream menu was inspired further by the research, which found that men over 45 would choose beer as their top tipple, and women would opt for a cocktail.

“The van has already visited four hotels and people have been queuing up to try the adult friendly flavours,” said Mat Finch, marketing director at Warner Leisure Hotels.

“Our guests were giddy with delight trying all of the different ice creams – you may think Jäger is a ‘young’ drink, but our Bombes were devoured within minutes. We can’t wait to visit the rest of the hotels and give the country a gloriously grown up summer.” 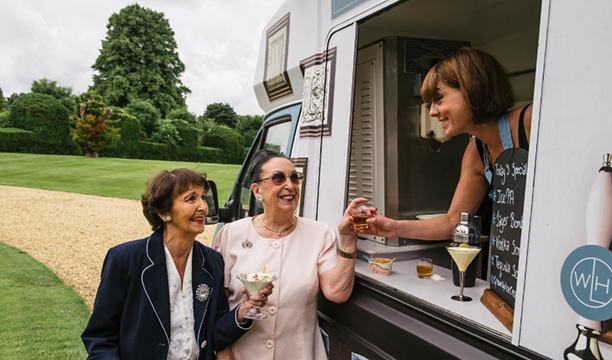