These are exciting times for premium, niche spirits, though the intensity of competition is terrifying, especially when it comes to gin. With new brands cascading onto a crowded market almost daily for the last five years, we may well have passed peak gin. Having top quality liquid is obviously essential, but for any remote chance of success you need a compelling story too.

Alexander Stein first heard the tale of Wing Commander ‘Monty’ Collins and his Schwarzwald dry gin 10 years ago while working for Nokia in Detroit. Collins had been posted to the British Sector in Berlin in 1946 and became involved in rebuilding the city’s zoo. He left the RAF five years later with an adopted egret monkey called Max, and after a failed attempt to become a watchmaker in the Black Forest, opened a guesthouse there. While his neighbours were busy macerating fruits of the forest for their eaux de vie and schnapps, Monty made gin.

Initially Stein was unimpressed. “I thought: Germany and gin? It’s not love at first sight,” he says. But three years later, having left the corporate world of Nokia, he became fixated with recreating Collins’ rudimentary recipe. Stein’s family had been involved in spirits with Jacobi 1880 brandy, which they sold to Allied Domecq in 1993, when he was 21. Although his father thought the idea of a German gin was nuts, he did send him a newspaper cutting about a local distiller called Christoph Keller.

The pair teamed up to develop Monkey 47 under Stein’s new company, Black Forest Distillers GmbH, in 2008. As greed gave way to fear in the financial markets and credit lines froze, “it was not a great time to be an entrepreneur,” he admits.

“In fact it was very painful because no-one would give you money, so we had to invest everything we had in just the liquid and not the infrastructure.” The gin was a ‘Monkey’ in honour of Max, and ‘47’ “because a good gin should be 47% abv”, says Stein, who backs this up by insisting on a similar number of botanicals. 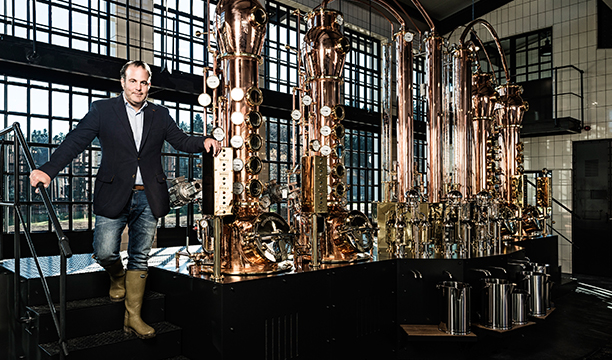 “We wanted to create something multi-dimensional, like a journey through a herbal garden,” he explains. After 150 test distillations, Monkey 47 was launched in May 2010 and within four years it was selling in over 40 markets. Among those who noticed was Alexandre Ricard, whose interest piqued when he was about to become Pernod Ricard’s CEO last February.

The two met and, as Stein recalls: “We had something to eat, and he said ‘I admire your brand because wherever I go, I see your product. You’re just eight people, how do you do it?’. I said ‘It’s simply because it’s a good product’.” Ricard urged him to get in touch if he was ever looking for a partner.

A few weeks later, the Frenchman was telling The Spirits Business and others that his company was “monitoring craft [spirits] very closely”, adding: “We look at [start-ups], obviously, and the question is: can they be scaled up or will be they be limited to an amount of volume?” A year on almost to the day, Pernod and the little Monkey have just sealed the deal, with the French group taking a majority share in the business for an undisclosed sum. Ricard was clearly delighted, saying: “There are moments in life in which you know immediately that you have found a jewel. And Monkey 47 is a jewel, perfectly matching the rising worldwide demand for craft gin with strong local roots.”

But it begs the question: why would a well-funded drinks giant like Pernod need to feed on others’ innovation when surely it could cook up a craft gin by itself? “In every large organisation politics plays a major role,” says Stein, remembering his time at Nokia. “Sometimes the good ideas don’t make it to the top for whatever reason. I don’t think they have a problem being innovative, but in a company that size, managing innovation can be very tricky.”

Yet from Stein’s perspective it sounds pretty risky being a tiny monkey in bed with an elephant the size of Pernod. However much it loves you, might it not roll over in the night and crush you, or accidentally stamp on you in the morning? “No, even under an elephant’s foot, there’s plenty of room to move about,” he laughs, insisting that nothing has really changed.

“It sounds boring. I probably need to brush up my French and travel a bit more to Paris,” he says. “What I love is being in the distillery. I cannot fly round the globe and sell to 60 markets with eight people. That doesn’t work in the long run. What’s very important is that the partner leaves us as an independent distillery. I’m still the brand owner, partially. I’m still a shareholder, and I’m still CEO.”

He was clear about pre-conditions for any deal. “It’s not like we could quadruple production, and we wouldn’t want to,” he says. “It’s about producing in a sustainable way, having organic growth and not destroying something: if you go to bed with a little monkey this is what we can do; this is what we can’t do, and this is what we won’t do. It’s very important to say this prior to negotiating with a partner.”

With Pernod’s de-centralised structure, he believes it’s a good fit and that the French understand what they have taken on. Still, you can’t help wondering if Alexandre Ricard will become frustrated with his new jewel on the issue of scalability. Monkey 47 was originally distilled in a solitary 150-litre still in Upper Hegau near Lake Constance. Last year it moved to a beautiful distillery of its own in the Black Forest, housed in an old farmstead acquired in 2013, 710m above sea level and surrounded by orchards and meadows. Given the brand’s success, the logical next step would have been to scale up to industrial stills, but Stein went the other way and installed four positively pocket-sized stills of just 100 litres each. 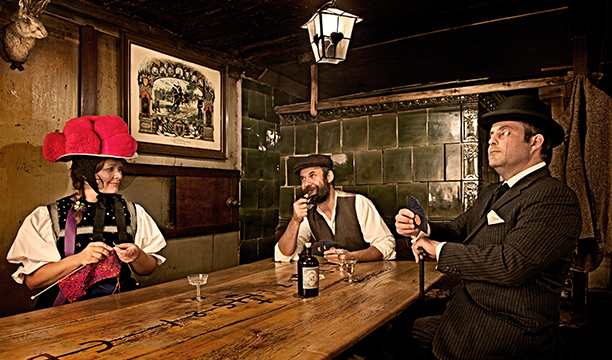 He uses a food analogy to justify the decision, saying: “If you cook your favourite recipe for five friends, and the next day you cook the same dish for a thousand, it’s not going to taste the same, for sure.” Stein maintains it’s all about the ratio of copper to spirit, and the use of steam extraction to remove flavours from the botanicals, which he reckons takes half an hour. “The distillation run of a 1,000-litre still would be six to eight hours. While for a 100-litre one it’s an hour-and-a-half, so there are lots of reasons why smaller is better,” he says. And besides, with 47 botanicals it might be unwise to chase volume.

Despite having so many of them, he claims juniper, which grows abundantly in these parts, is “by far the most dominant flavour”. This should reassure Greenall’s master distiller, Joanne Moore. Two years ago she told SB of her fears that the new generation of gin distillers might “go too far and end up creating a sub-category of very sophisticated flavoured vodka”.

Stein is less concerned. “Okay, if someone makes a coconut-flavoured gin, that’s ridiculous,” he says. “We’re using traditional gin ingredients, but we’re also using 30% of original botanicals. Not fancy ones, but things like bramble leaves and lingonberries.”

Part of the ethos was to create a spirit that could stand on its own. “When I started, a lot of people said gin is a category you cannot drink neat,” he says. “I don’t see that as a great qualifier for a product if you can only drink it diluted. So my take was that the product should taste like a high-end eau-de-vie.”

He claims that most Monkey 47 is drunk as a G&T, then neat, and then as a Martini. In Germany, gin is way behind vodka, “but it’s really getting there because it’s about taste and craftsmanship”, says Stein. Among its export markets, it’s doing well in the UK, Belgium, Singapore and Hong Kong.

Assuming there’s enough to spare, it will be fascinating to see how Pernod manages to build Monkey 47 in the States. Stein talks of “a very different drinking behaviour there, but you’ve got a new crowd of people who are really into ‘craft’. It’s not a word I like – I prefer ‘high-end spirits’”.

There’s an ambivalence to juniper-forward gins in America, especially when mixed with low-grade tonic from a gun, but he reckons things are improving, saying: “The good bars are starting to serve bottles of Schweppes, Fever-Tree and Fentimans, and even the ice is getting better.”

Over in the great gin belt of Spain, there’s a contraction going on. “A lot of bars are de-stocking. Where once they had 100 gins they’ve now got 20,” says Stein, who feels the news hasn’t quite filtered through to his fellow distillers back home. “Right now there are about 70 German gins. There’s a new one every week.”