Whether a device that levitates cocktail droplets midair or a shaker based on a design from the 19th century, there’s an abundance of cocktail tools out there to enhance creative drinking.

Some of the most inventive minds in the drinks trade have created unique interpretations of shakers, coolers and glassware over the past few years.

Blended Scotch brand Ballantine’s was one step ahead of the curve when it unveiled a unique glass that allows whisky to be consumed in zero-gravity conditions, while Rolls-Royce created a luxurious cocktail hamper complete with a jaw-dropping price tag.

We may have already brought you the coolest high-tech bar gadgets, but click through the following pages to see our selection of quirky cocktail tools. If you think any have been missed off this list, let us know by leaving a comment below. 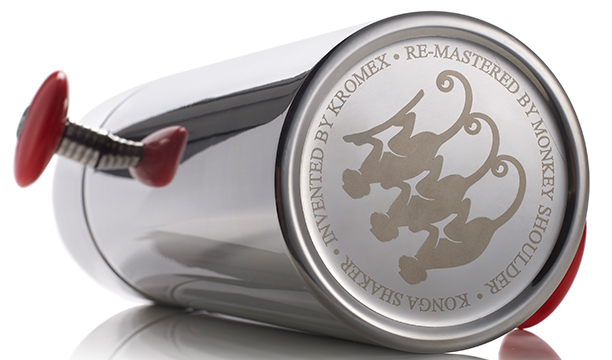 Just last week, the creative chaps over at blended Scotch whisky brand Monkey Shoulder finally unveiled the “top secret” Konga Shaker – an appliance that mixes cocktails with a rotating rather than shaking motion. Based on design from the 1930s, when the style of shaker first rose to prominence, the Konga is a large stainless steel cylinder container with red plastic handles that bartenders can use to turn the appliance. However, the recreated shaker has the modern addition of a sieve to enable easier pouring ability.

“Cocktail bars should always be fun, but even they are starting to take themselves a little seriously these days,” said Dean Callan, global brand ambassador for Monkey Shoulder. “The Konga Shaker is set to change that. It represents all that’s good about cocktail making – theatre, sociability and great tasting drinks – so it made perfect sense for us to bring it back.” 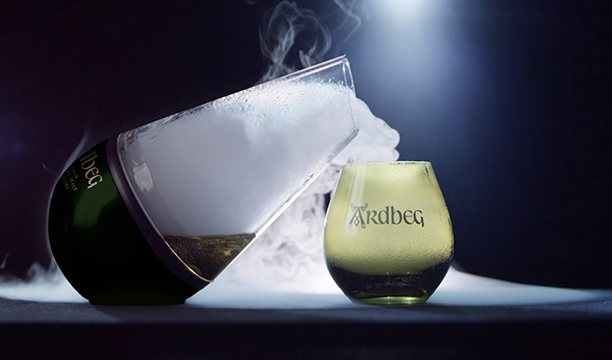 If ever you have a problem with your tonsils, but crave that whisky hit, then look no further then Ardbeg’s Haar innovation. The “revolutionary serving tool” conjures the “thick, peaty coastal mists” of Islay in a high tech carafe that allows whisky lovers to inhale evaporated whisky through a straw. Using ultrasound pads that emit rapid vibrations, the carafe produces micro droplets of whisky that form a “drinkable cloud”. Ardbeg Haar takes its name from the Scottish word ‘haar’ – a cold fog that sweeps in from the sea without warning, often enveloping Islay and the distillery which clings to its coastline.

“The haar rolling in from the sea is as familiar sight to island life as the precious peat which influences our whiskies,” said Dr Bill Lumsden, director of distilling and whisky creation. “We believe that in this sampling ritual we have captured the essence of its elusive qualities.” 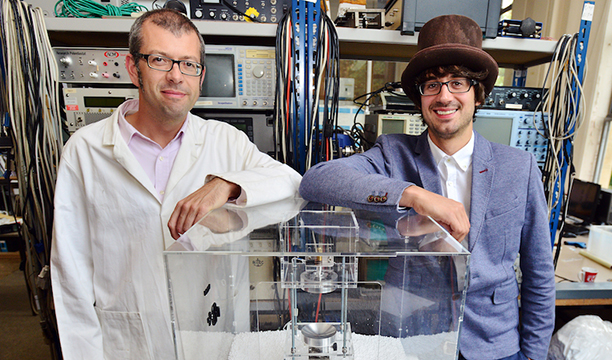 Touted as the “world’s first levitating cocktail machine”, no doubt many bartenders would like to give the Levitron a go. Created by Charlie Harry Francis, founder of experimental events company Lick Me I’m Delicious, in collaboration with Professor Bruce Drinkwater of Bristol University, the machine uses sound waves to levitate droplets of alcohol that can then be licked out of the air. It has created a levitating gin and tonic at 70% proof and a levitating Bloody May at 160% proof.

“Sound waves, even in the form of your voice have an inherent amount of power,” said Drinkwater. “The Levitron uses very powerful sound waves in the ultrasonic spectrum which crucially are beyond the range of human hearing, otherwise it would seriously damage your ears when the machine was switched on.” 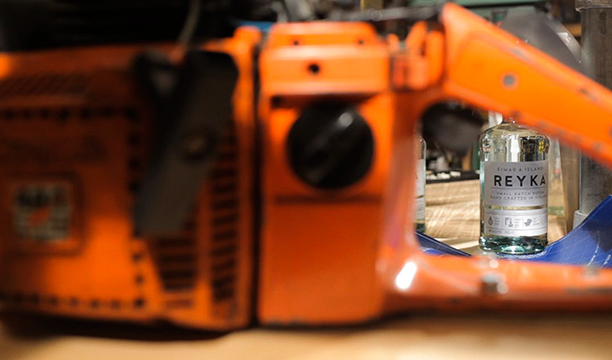 “After shaking who knows how many cocktails in more bars and events than I can even remember, I decided I wanted to build a cocktail shaking machine,” said Petch. “My challenge was: build a powered cocktail shaker that, like Reyka, is resourceful and requires minimal exertion from the bartender.”

In 2014 bartender and entrepreneur Jason Crawley recreated a historical cocktail shaker, known as the Imperial Shaker Machine, using a 200-year-old drawing discovered in London. To operate the impressive machine, a far cry from the simple hand-held shakers in today’s bars, bartenders should simply crank turn its large wheel and the shakers above will move up and down and side to side. Initially only 12 Imperial Cocktail Shaking Machines were being produced and pre-sold globally to collectors and cocktail enthusiasts.

“It has been a lifelong aspiration to finally get the shaker ready to view and sell,” said Crawley. “Having made my career in the drinks industry, being born in the steel city of Sheffield and to honour my grandfather’s steel working life, this has been a dream come true.” 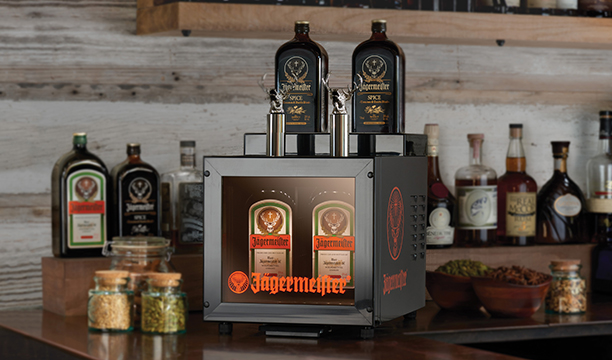 “It’s important that we continue to listen to the needs of bartenders and developed the Speed Pour in collaboration with them as we are always looking for new ways to serve this German elixir made up of a closely guarded recipe of 56 premium botanicals sourced from around the world,” said Marcus Thieme, chief marketing officer for Jägermeister at the Sidney Frank Importing Company. 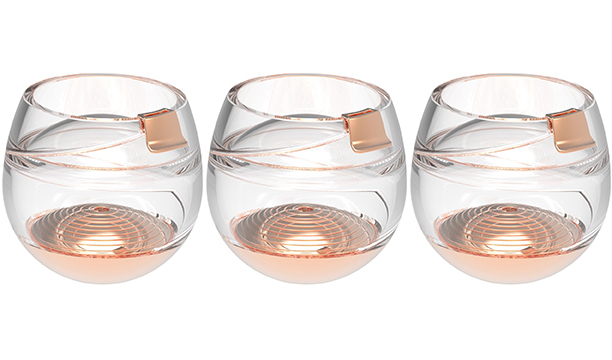 As Richard Branson moves closer to launching Virgin Galactic – the world’s first commercial space flight – there might be greater need for gravity defying drinks vessels than initially thought. In September 2015, blended Scotch whisky brand Ballantine’s unveiled its innovative Space Glass for intergalactic sipping, featuring a rose gold-plated stainless steel bottom and spiral straw through which the whisky is able to climb – despite zero gravity. The base is also magnetic, allowing space travellers to stick the glass to the side of the space ship. Tiny “scent slots” in the top of the glass allow the drinker to smell the whisky, while ensuring no liquid is able to escape. The prototype was “scientifically validated” through testing at the ZARM Drop Tower in Bremen, Germany – a 480-foot tall laboratory facility.

“At Ballantine’s we are inspired by great products,” commented Peter Moore, global brand director for Ballantine’s. “We want to take our brand to all parts of the globe, geographically, internationally and culturally.” 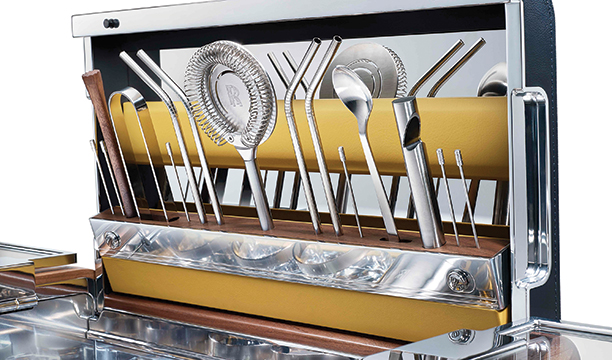 Marking a new level of cocktail ostentatiousness, luxury car manufacturer Rolls-Royce launched a £26,366 bespoke cocktail hamper in the run-up to Christmas last year. Each worth more than a BMW 3 Series, the hampers are crafted from American walnut wood and leather made from bull cowhides, apparently avoiding the stretch marks of female cows. It includes: four handmade decanters, four tumblers, a cocktail shaker, an ice bucket, ice tongs, a bottle opener, a knife, two sharing plates, napkins, six cocktail sticks, two food containers, four straws, a stirring spoon, a jigger, a muddler, a crusher, an atomiser, a strainer, a glass serving tray and a chopping board.

“This beautifully executed cocktail hamper illustrates the marque’s intimate understanding of the desires of the most discerning patrons of luxury in the world; Rolls-Royce customers,” said Gavin Hartley, head of bespoke design, Rolls-Royce. 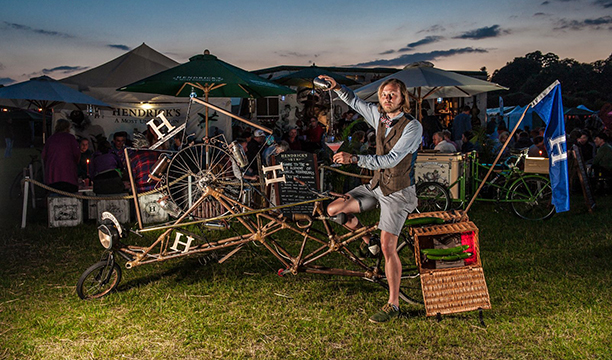 Quirky gin brand Hendrick’s knows how to turn heads and in 2014 caught the attention of London Cocktail Week goers with the “world’s first” pedal-powered shaker. Said to “combine the thrill of velocipedal travel with the joys of post-ride refreshment”, the Boneshaker uses the rotating motion of cycle wheels to simultaneously shake six Hendrick’s libations.