The independent distiller invited SB to a formal dinner with representatives from Lagardère Travel Retail at Hotel Prince de Galles in Paris last night (18 February), to celebrate the activation of the travel retail-exclusive age statement series.

House of Hazelwood was unveiled at the TFWA World Exhibition & Conference in Cannes last year, inspired by the “vibrant” life of William Grant’s granddaughter, Janet Sheed Roberts. The brand is named in recognition of her lifetime residence at Hazelwood House, which lies close to the Glenfiddich Distillery in Dufftown, Scotland.

Three inaugural expressions have been introduced in homage to the varied adventures and extensive travels of Mrs Roberts: an 18-year-old, inspired by Paris in the 1920s; a 21-year-old, referencing Mumbai; and a 25-year-old, with a focus on Shanghai.

“Indeed, House of Hazelwood 18 Year Old – which we are particularly featuring here – is inspired by the elegance of Paris in the 1920s, a theme that we are aiming to recreate with this very special launch activation.

“William Grant & Sons now enjoys a leading position within the travel retail sector for exclusive and unique whiskies and House of Hazelwood is another example of how we never stop looking at new ways to bring out the best that our distilleries have to offer.”

The activation, launched at Buy Paris Duty Free, sees the whiskies displayed on a cargo bike, which features a “dia-cut” Paris skyline on a 1920’s style frame. Passengers are greeted by a waiter – proffering a Hazelwood embroidered serving towel and silver tray – who will host a tutored tasting of House of Hazelwood range.

In a unique move by William Grant, the activation will be based in the cosmetics area of the store due to the perfume bottle-inspired design of the range. Fragrance cards spritzed with whisky will­ be handed out to passengers, who will be invited to explore the different aroma profiles of each blend.

To complete the experience, which will be implemented until mid-March, gift-wrapping of House of Hazelwood purchases is offered at the till areas.

“Consumers are increasingly looking for new and different experiences and our hope is that by offering such an exclusive range as House of Hazelwood we will set the retail bar here at Paris CDG at a higher level.” 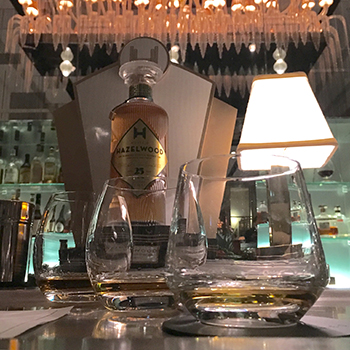 House of Hazelwood is available exclusively in global travel retail until September 2016, when it will then launch in select markets around the world.

Of the range House of Hazelwood 18 Year Old is said to be “the purest expression of Kininvie and Girvan spirits in the range”, married in tuns of Portuguese oak. It is said to have “vanilla sweetness” on the nose, “creamy toffee enhanced by soft oak undertones” on the palate, with a “long and elegant finish”.

The 21 Year Old represents a “bolder, somewhat spicier and more robust whisky”, with some of its malts aged for 21 years in sherry casks made of European oak. On the nose “dried fruits and spice dominate, alongside a sticky sweetness reminiscent of rich fruit cake”, while the palate offers “cinnamon, cloves and woody spice, with a dry finish”.

Although at present no further expressions are planned, Kinsman told SB there is potential for future releases.

Of the launch, he said: “My ambition was to create a range of whiskies that would pay tribute to the extraordinary Janet Sheed Roberts and House of Hazelwood is based on whiskies from the two distilleries closest to her heart: Kininvie and Girvan, as well as the Grant family’s private collection.

“I am exceptionally pleased with the result – not only the individual whiskies themselves but also the way that they have been bottled and packaged to tell each individual story. Seeing House of Hazelwood available for the first time to the public here at Paris CDG is a wonderful feeling and I am proud to be part of it.” 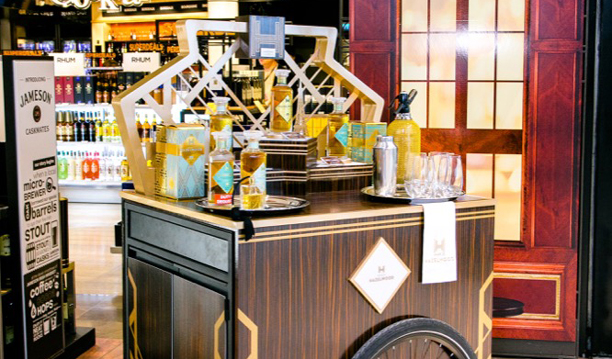 Known as ‘the wee Janny’, Mrs Roberts – who passed away in 2012 at the age of 110 – was cherished by the Grant family for her “strength of character, passion and determination”.

In Hazelwood House she revelled in learning, before travelling the world, attending shows, parties and company ceremonies. In the historic house – which is still owned by the Grant family – art deco artefacts, pictures and stories from her adventures remain.

Kirsten Grant Meikle, director of Prestige for William Grant & Sons and granddaughter of Mrs Roberts, said: “We’re really proud and privileged to be able to launch this brand. The idea was to try and make a reflection and statement of the way the wee Janny lived her life – she was very elegant, she travelled a lot, and she loved whisky.

“She loved fashion too, and in fact she had a pair of Ferragamo boots which she took around the world with her. She had a name for them – ‘the campaigners’ – and she left them to my cousin Sal with a note saying, ‘keep these by your door, and every time you step over it, you’ll remember how strong you are’.

Mrs Roberts recalled many stories – including seeing the first aeroplane, watching legendary actors and actresses of the time in shows, and memories from her younger years.

Kirsten added: “People often see William Grant as a mythical person, because it seems so long ago that he lived, but the wee Janny remembered him well. When he went blind later in life, her aunty used to look after him. He always used to tell the wee Janny, ‘watch your feet on the stairs!’ even though he couldn’t see – so he couldn’t see the stairs.

“She always spoke of his beautiful handwriting too. She said he always complained that his children and grandchildren’s handwriting was ‘going down the pan’. The wee Janny went on to tell us the same thing!”