The rare whisky market experienced a “record” year in 2015, with the value of coveted Japanese whisky Karuizawa soaring 75% in just nine months – a rise never before experienced by any whisky brand.

“The recent growth in the rare whisky market has exceeded all our forecasts,” said RW101 co-founder and former master distiller for The Macallan David Robertson.

RW101 notes a “staggering rise” in the value of Japanese whisky after its Karuizawa Index increased 75% in nine months, with bottles that originally sold for £350 12 months previous achieving more than £3,000 on the secondary market.

However, the firm claims these increases are “unsustainable” and that Karuizawa’s 6% decline in the last three months of the year is indicative of a “price correction” that will continue into 2016.

The Macallan retained its position as the most collectible Scotch whisky – that it, it is the number one traded distillery on a volume and value basis – accounting for nearly 10% of the market for all bottles sold and 23% of the total value.

Diageo’s Brora distillery remains at the top of RW101’s Investors’ Index as silent stills “remain the most significant target-pool of stock”. Rare Killyloch comes in second, moving up a significant three places from 2014.

“The coming year promises to bring even more supply to the market as new auction houses appear,” added Robertson.

“While the sustainability of these volume increases could be called into question, we know for certain that the true rarities will only become rarer.

“Should demand remain constant or increase, as is fully expected, Scotch’s credentials as a viable collectable and alternative asset class continue to look particularly robust.” 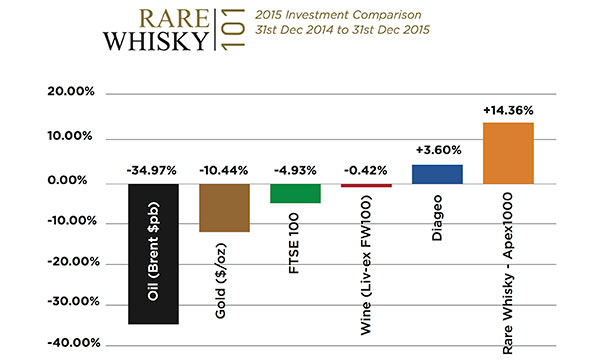