Lagardère Travel Retail saw “continued momentum” in 2015, with like-for-like sales up 4.3%, despite a slowdown in France.

Sales in France contracted 0.4% in the fourth quarter, due to the slowdown in passenger traffic at French airports following the Paris attacks. Despite this, full-year sales in the country increased 5.8%. 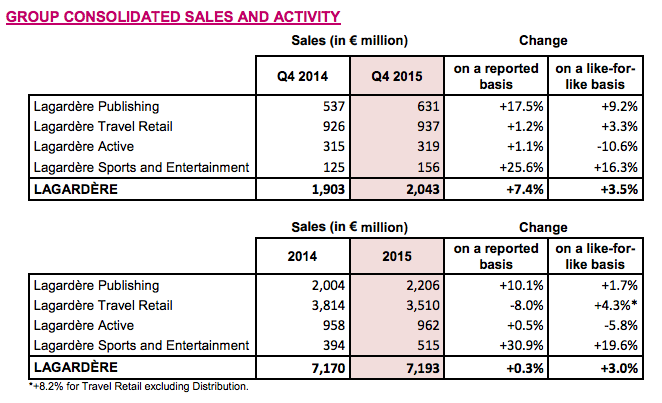 While the currency effect was positive (+€57 million), the scope effect was negative by -€498 million, due to the deconsolidation of Relay activities in France, high street activities in Poland, and the disposal of the Press Distribution business in Switzerland. The figure also includes €146 million in acquisitions, primarily Paradies in the US in November 2015, and Airest in Italy in April 2014.

Growth was driven by passenger traffic, the consolidation of acquisitions, and the development of operations, including store modernisation, winning bids, and the roll-out of new concepts, said Lagardère Group.

“The market environment in 2015 was marked by the brisk pace of growth in air traffic, the continued downturn in the press market, and an unsettled geopolitical and macroeconomic situation,” the Lagardère Group statement read.

“The development strategy of Lagardère Travel Retail was a success, with accelerated organic growth in Travel Retail and the completion of acquisitions in a growing North American market (primarily Paradies). However, the end of the year was marked by the negative effect of the attacks in Paris.”

Travel retail now represents 73% of Lagardère Group’s consolidated sales, up from 66% in 2014.