Woodford Reserve, while being a relatively new brand, has a long heritage that is standing it in good stead as it rides the Bourbon boom.

Woodford Reserve is what you’d call a hot brand right now, growing by over 75% between 2010 and 2014, and if anything that growth is accelerating.

Riding the wave with confidence is not easy given the time lag between distillation and hitting the market, and the long-term forecasts involved.

Consider that most of the premium Bourbon sold this year would have poured off the stills in 2008 in the midst of a financial meltdown with many predicting a return to the Great Depression.

Yet at parent company Brown-Forman, no-one sounds too concerned about supply and demand. “We’ve been in the whiskey business since 1870, so it’s not like our first rodeo,” says Tim Delong, the firm’s global marketing director for North American whiskeys.

While Woodford Reserve was born in 1996 near Frankfort, Kentucky, its roots are somewhat deeper. “We bought the distillery in 1941 when it was the Labrot & Graham distillery which we operated making various whiskeys, most of which no longer exist,” explains master distiller Chris Morris. “It was abandoned in 1959 and sold to a neighbouring farmer because it was surrounded by crop land in 1973.” It was a symptom of Bourbon’s decline, and when Morris joined Brown-Forman three years later he says “there was a feeling of ‘hang on for the ride down’”.

The company distributed Glenmorangie in the States and noticed a sudden growing interest in single malts in the late 1980s. “Americans started enjoying these very expensive imported whiskeys, and that was a shot across the bows of traditional Kentucky Bourbon because we had nothing like that at all,” says Morris.

The new brand created to fill the gap needed a home – somewhere to bring distributors, retailers and bartenders, and convert them into evangelists. So it was decided to buy back the old distillery, then just an empty shell with little more than its bucolic setting and original, limestone spring. But that was enough – in fact Morris claims that starting from scratch was “a great luxury most distillers don’t have.”

Everything was carefully planned, as he explains: “We had a great look, a great product, a wonderful visitors’ centre and tour experience.” All that was missing was a name, until someone cried at the last minute: “Heck, we’re in Woodford County, let’s call it Woodford”.

At the time, Bourbon was still declining, but the tide began to change and in 2004 Morris noticed Woodford Reserve was taking off. “It just got that momentum behind it, that weight of distribution,” he says. “It sped up and we haven’t looked back since.”

With sales of 250,000 cases in its 2013 fiscal year, Brown-Forman announced in June it was expanding the distillery by adding three new warehouses, a new bottling line and three new pot stills as part of a US$35 million (£22.7m) investment, due to complete in 2016.

Though the increase in raw spirit will take years to become fully matured Bourbon, Morris points to the company’s experience: “We’ve got a good track record in distilling forecasts and have planned for this success. We haven’t gone too widespread on our distribution. Everybody likes to run to Japan for volume, but we didn’t sell Woodford Reserve there until 18 months ago.”

Brown-Forman won’t divulge Woodford Reserve’s current volume, perhaps to protect its ‘small batch’ status. Morris accepts the term is “open to interpretation”, but says: “For Woodford it means our pot still distillation and having the smallest mash tubs in the industry. We’re doing everything on a small scale and are focused on high quality.”

The pot stills supply some of the spirit in the mother brand, and all the whiskey in the Master’s Collection – a series of one-off releases begun in 2005. These have included a Kentucky malt whiskey, a 100% rye and most recently, a Pinot Noir finish. Since 2012, there have also been three permanent extensions starting with Double Oak where Woodford Reserve is given an extra year in special, heavily toasted, lightly charred barrels. The latest extension, launched in January, is a rye that is initially being rolled out across 15 states.

The main brand sells for US$35 in the States, but for Morris, “it defies the idea of people trading up through cheaper whiskeys. Woodford Reserve is an entry level brand for people coming in, whether they are craft beer drinkers or whiskey connoisseurs.”

The message has been spread by word-of-mouth through bartender recommendations and, for the first decade, a limited print campaign around “a beautiful bottle shot and a glass.”

According to Tim Delong: “It’s only in the last two or three years, when the business has been exploding, that we’ve been a lot more active in trying to reach consumers directly. Last year we had our first TV campaign in the US, alongside print.”

The campaign, called We love your Woodford Way, was inspired by the fact “there’s nothing out there that celebrates the drinker”. The idea that Bourbon drinkers are somehow intrinsically interesting and have stories to tell, seems to be something Americans are buying into given the category’s strong US growth.

Meanwhile, in the background he credits “the pop culture of Mad Men and Boardwalk Empire”, the resurgence of classic cocktails and a backlash against flavoured vodka. “In the last five years the flavour proliferation got to be almost ridiculous,” he says. “I feel there’s been a swing back to something real that’s made in a specific place.”

“Within the whiskey category, Bourbons are inherently more mixable,” he continues, “and we do best in markets where they have a nice cocktail culture.” Woodford Reserve is in some 125 overseas markets, though in most it has barely begun. A fifth of sales are exports led by the UK ,which is “doing fabulously well,” claims Delong.

He believes the current category growth will last well into the next decade. If so, Woodford Reserve had better crank up production even more – though whether it can retain its folksy, small batch, craft image among consumers remains to be seen.

Click through the following pages to see the timeline of Woodford Reserve’s brand history. 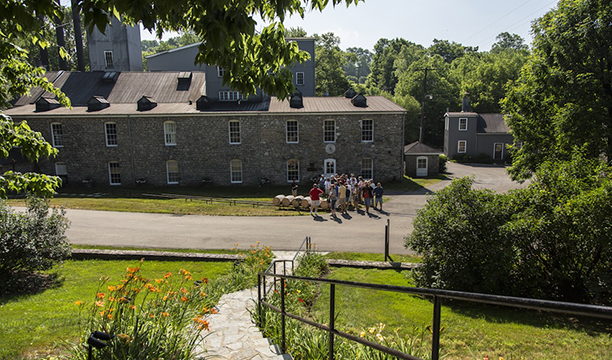 It was 1941 when Brown-Forman bought the Labrot & Graham distillery in Kentucky. 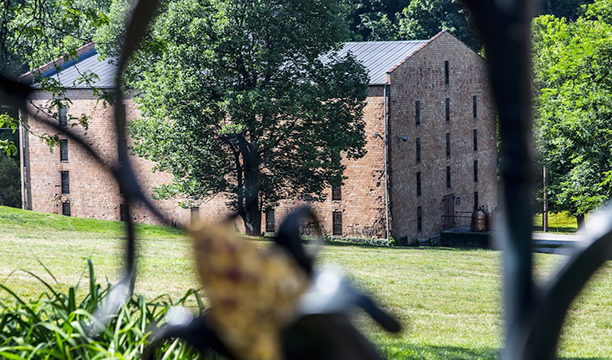 However, by 1959 the distillery was mothballed and later sold off to a local farmer. 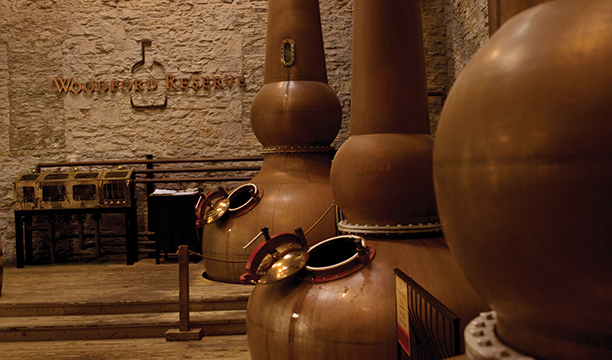 Brown-Forman re-purchased the distillery in 1993 and the first new make spirit flowed from the stills as whiskey production got well underway. 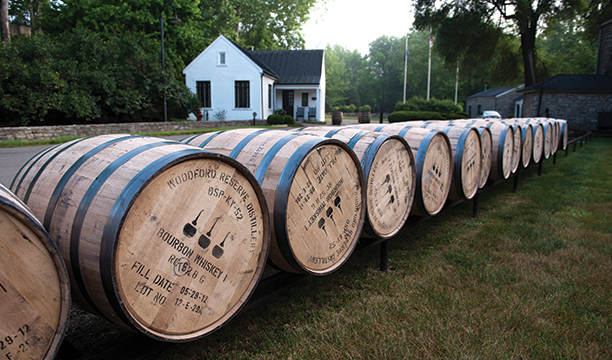 A milestone in the brand’s history – 1996 witnessed the official launch of Woodford Reserve Bourbon. 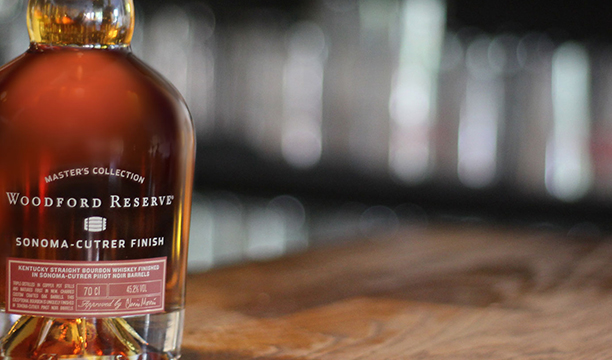 Woodford Reserve’s Master’s Collection was released in 2005 with the first in a series of one-off bottlings. Seven years later, the Bourbon brand extended the range with the launch of a Maple Wood Finish edition. 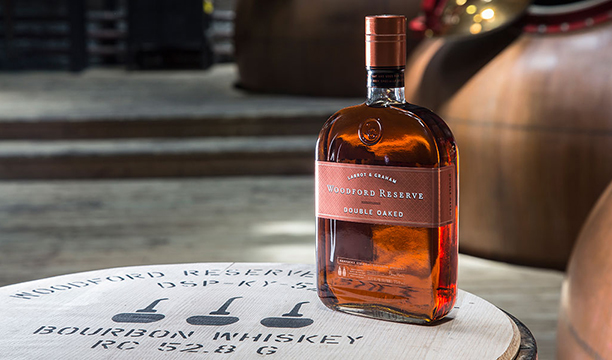 When Woodford Reserve Double Oak was released, it marked the first permanent line extension for the brand. First launched in the US, the small batch twice-matured Bourbon was crafted by master distiller Chris Morris in response to the “overwhelming success” of the Seasoned Oak Master’s Collection bottling. Two years later, the expression was rolled out to the UK market. 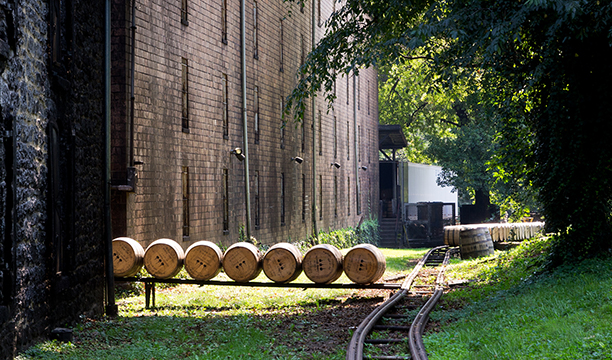 Brown-Forman revealed plans to invest US$35 million in expanding its Woodford Reserve Distillery in 2013, in order to meet soaring global demand for Bourbon. With production levels already reaching nearly 250,000 nine-litre cases in its 2013 financial year, the investment was planned to establish three new maturation warehouses with capacity to store 165,000 barrels of Bourbon, three new copper pot stills, an expansion of the existing bottling line and general improvements to “increase general efficiency and productivity”. 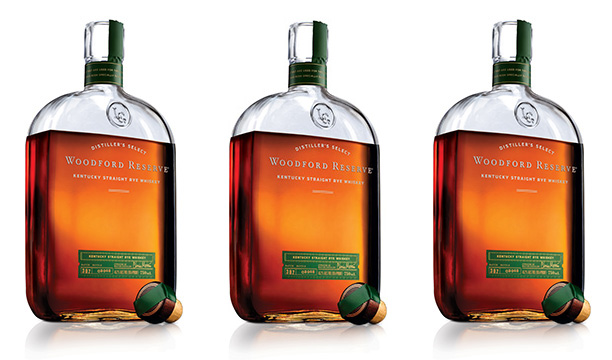 In January 2015, Woodford Reserve revealed the third permanent addition to its portfolio – Woodford Reserve Rye. The straight rye whiskey – made from a mash bill comprising 53% rye – was initially launched in the US, but was extended to the UK in June.