Cranes, toilets, gold mines and giant coffins have all acted as very unusual locations for these unique watering holes around the world.

We may have already taken you through the world’s most unusually themed bars, but what of the most bizarrely located?

In an effort to offer a one-of-a-kind drinking experience in an increasingly competitive environment, some bars choose particularly odd locations to enthral experimental barflies.

While Whyte & Mackay opened an intimate pop-up inside a historic construction crane to celebrate its 170th anniversary, other entrepreneurs have found use for neglected public toilets in London’s murky underground.

Click through the following pages to discover our selection of the top 10 most bizarre locations. If you think we have overlooked any essential choices, let us know by leaving a comment below. 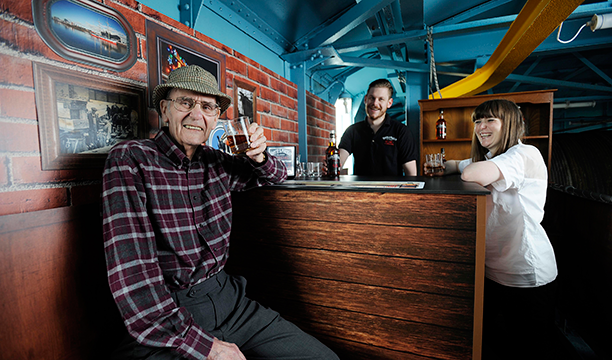 A 150-year-old crane in Glasgow played host to a pop-up bar opened for five days only by Scotch whisky producer Whyte & Mackay last June. Launched in celebration of the firm’s 170th anniversary, the bar, called The Lion’s Clyde, was based inside the wheelhouse of the 107-year-old Titan Crane, situated next to the River Clyde. With capacity for just eight people at a time, it was by far the smallest bar in Glasgow. 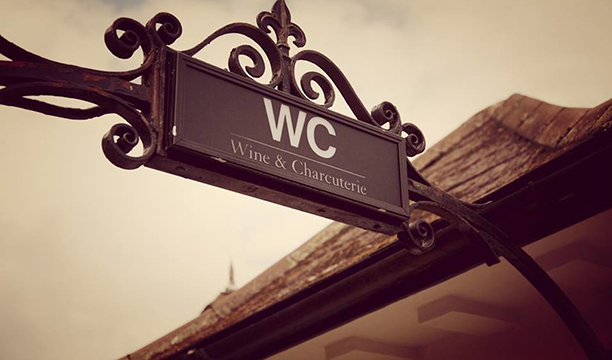 In London, the strange new bar theme of converting old disused public toilets into stylish drinking dens has taken hold, with a number of new bars popping up across the city. In December last year, Will Borrell, founder of Vestal Vodka and brother of Razorlight frontman Johnny Borrell, won an 18-month battle with residents to open a cocktail in abandoned public toilets in Kentish Town, called Ladies and Gentlemen. Meanwhile, WC Wine & Charcuterie opened in the site of a 100-year-old former public loo below Clapham Common tube station. 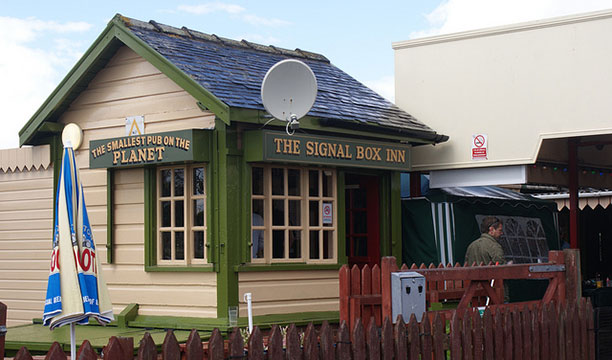 The Signal Box Inn is exactly what it claims to be – a pub situated inside a historic signal box beside a quaint railway station. Located in the UK seaside town of Cleethorpes, the bar also proudly claims to be the “smallest pub in the world”, however the Guinness Book of World Records has not yet verified this. At 64sq feet, the pub can accommodate only six people at a time. Now a popular tourist attraction, The Signal Box Inn building was originally a working signal box in Scunthorpe but moved to Cleethorpe 12 years ago, opening as a pub in 2006. 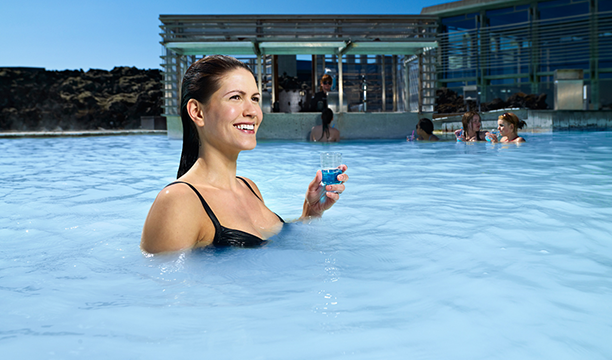 The Lagoon Bar is situated in a natural Iclandic lagoon that was formed in 1976 during operation at the nearby geothermal power plant. Part of the Blue Lagoon Clinic – said to be one of the most popular tourist attractions in Iceland – the bar offers an array of smoothies, wines and beers to visitors, who do not even need to pull themselves out of the invigorating warm water to be served. 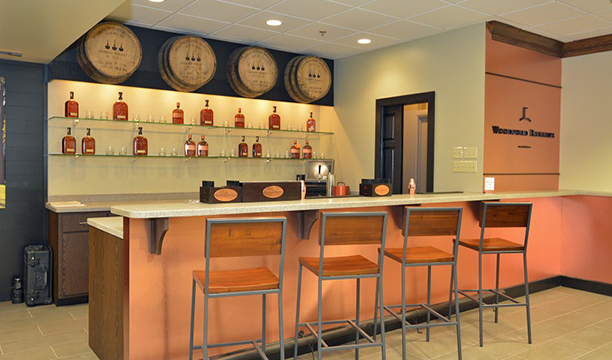 A military base might not seem like the obvious place for a Bourbon bar, but Woodford Reserve capitalised on its relationship with Kentucky’s Fort Knox back in May 2013 and opened an exclusive branded venue. The bar, called the Woodford Reserve Room at Saber & Quill, features a granite bar top and old Bourbon barrels and was the first of its kind to open on a military base in US history. 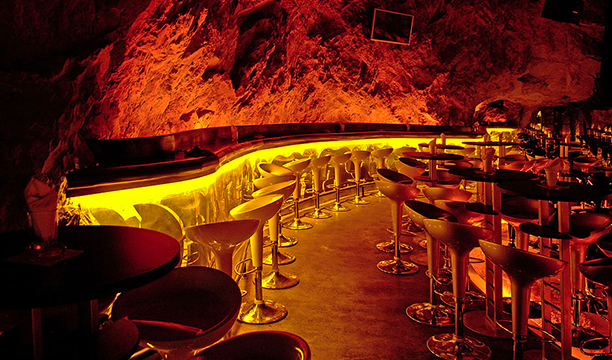 Based in a tunnel of the former Mina El Eden gold mine, the Mina Club Bar is certainly not for the claustrophobic bar hopper. To access this unique nightclub, intrepid partygoers must board a small train and travel about 2,000 feet underground. The mine in which Mina El Eden is based first opened in 1586 and closed finally in 1964 after a devastating flood. 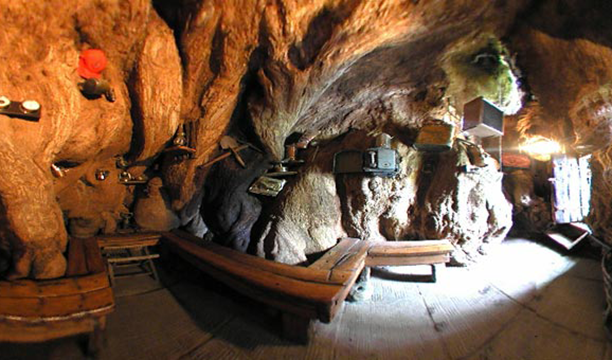 Said to be the widest “Baobab” in the world, this beautiful South African tree houses an intimate bar at its centre. Located on Sunland Farm, in Limpopo Province, the tree has hollowed out on the inside due to its jaw-dropping 1,700-year age, making just enough space to squeeze 15 lucky patrons into the Baobab Tree Bar. 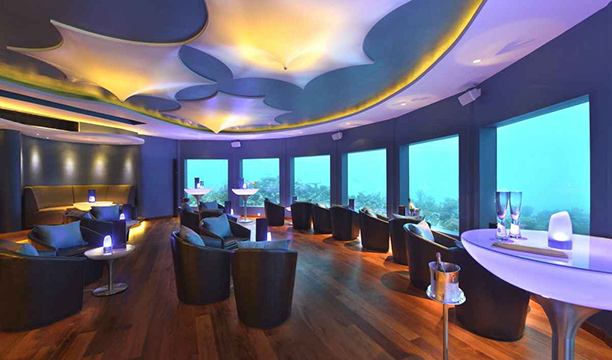 Located 500-meters off the shore of the Niyama resort in the Maldives, Subsix is a bar that allows drinkers to enjoy cocktails while enveloped in the beautiful surroundings of the Indian Ocean. Submerged six metres below sea level, the bar offers Champagne breakfasts, subaquatic lunches, wedding parties, wine tastings and club nights. 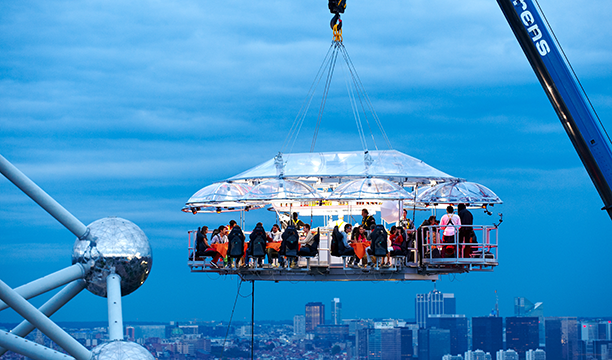 Dinner in the Sky is a unique dining and drinking experience that should be avoided by vertigo-sufferers at every cost. The pop-up was launched by Hakuna Matata, a communications agency specialized in gourmet pleasures, and The Fun Group, a company specialised in amusement park installations, in 2006. The dangling restaurant and bar can cater up to 22 diners 50 meters in the air and can be held at any location provided there is a surface of at least 500 metres squared that can be secured. So far, Dinner in the Sky has taken over the skylines of 45 countries across the world. 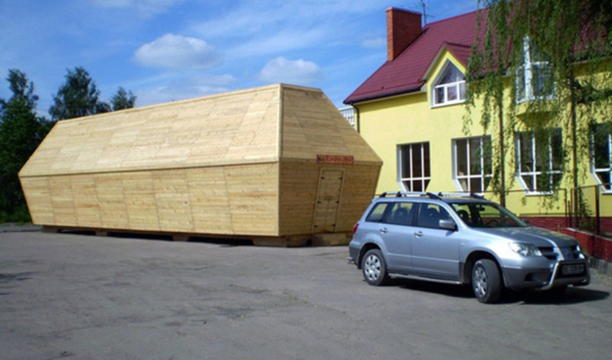 One for the morbid imbiber, the Eternity restaurant and bar is based in the world’s largest coffin. The building, built in Truskavets, Ukraine, is a 65ft long coffin, made up of 30 cubic metres of pine. Visitors can browse funeral paraphernalia before sitting down to order their food and drinks – all of which are death-themed.