The re-emergence of speakeasy bars has taken the global cocktail scene by storm, but New York boasts some of the best clandestine drinking dens in the world.

These bars are often have savvy disguises – from a hot dog joint to an unmarked apartment door – and allow drinkers to re-imagine illicit consumption in 1920s America.

Some offer a unique twist on the pervasive speakeasy trend, with the incorporation of Asian and medicinal themes. However, for many, their secrets have been discovered and have now gained near-iconic status among Big Apple barflies.

Click through the following pages to see our pick of 10 of the best speakeasy bars in New York. If you think any exceptional venues have been missed off this list, let us know by leaving a comment below. 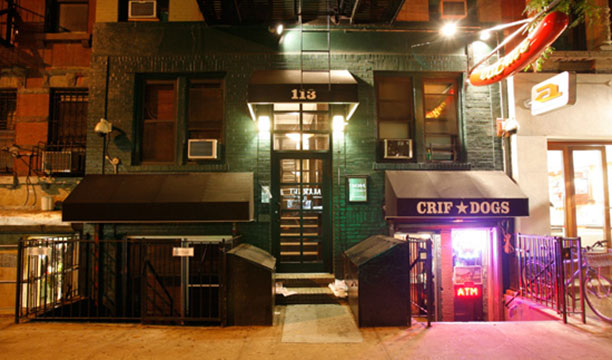 Shrouded in secrecy, PDT takes its speakeasy ethos to heart and is famously difficult to find. The inconspicuous bar can be discovered down a dark set of steps leading to fast food joint Crif Dogs. At the back of the shop there’s a phone booth – walk inside, press #1 and wait for a hidden door to open. There’s no other style bar in New York that follows its theme so closely – just don’t let your hard detective work go to waste and book a table beforehand. 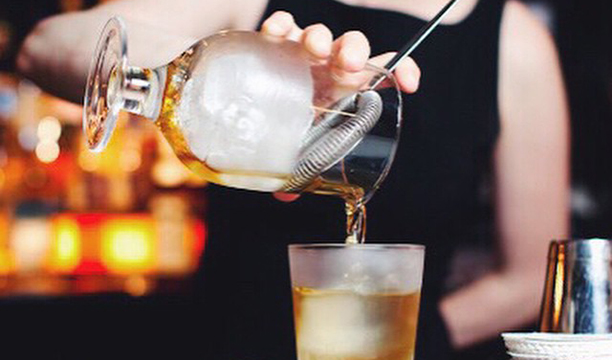 Death & Co has quickly become one of the most famous bars in New York despite its discreet appearance. Only a sign on the pavement alerts curious imbibers to the location of the bar, which is named after a term associated with those who consumed alcohol during Prohibition – for to drink alcohol was deemed to live a life shadowed by death. Renowned for its exquisite cocktails, Death & Co specialises in house serves with just three classic mixes available. 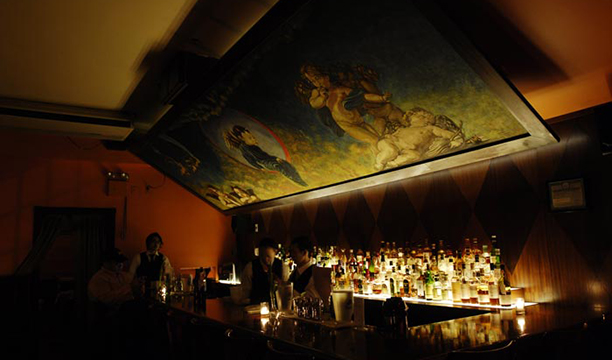 The enormously popular Angel’s Share is tucked away inside behind an unmarked door inside Japanese restaurant Village Yokocho. First opened in 1994, the diminutive, elegant parlour brings a refreshing Asian twist to the traditional speakeasy, serving an array of sake, Japanese whisky and oriental cocktails in addition to rum, Bourbon and gin.

New York’s apothecary-themed cocktail bar, Apothéke, certainly has a degenerative charm about it. With velvet seats, a marble bar, and candlelit tables, Apothéke evokes an image of the fading glamour of bars from the distant past, designed to mimic Parisian absinthe dens from the 19th century. Its cocktails are prepared with local and organic produce from local greenmarkets or picked straight from its own rooftop herb garden. The bar is also situated inside an old real-life opium den. 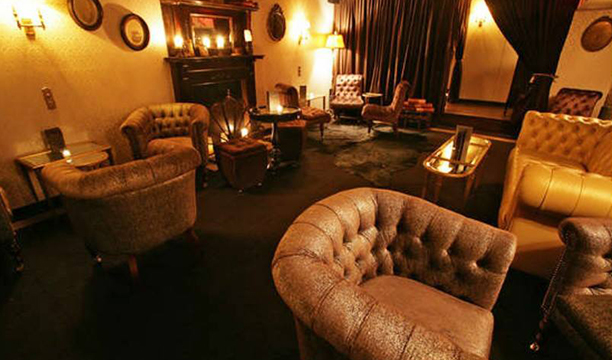 Named after an 1896 law to stem New Yorkers’ liquor consumption, The Raines Law Room sits in an unmarked, windowless space in the upmarket Chelsea area of the city. With cosy furniture, grand fireplaces and a air of secrecy, the venue features much sought-after private seating areas with buzzers to summon bar staff. The venue opened a sister site inside The William Hotel on Murry Hill last October, featuring “build your own” Old Fashioned cocktails. 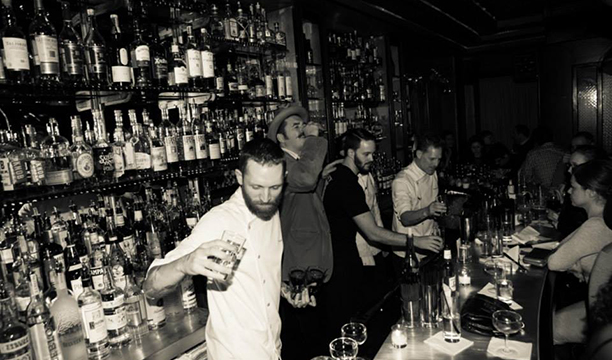 Based in the West Village, Employees Only was opened in 2004 and has quickly become one of the most popular bars in New York City. Featuring classic cocktails, as well as “fancy”, long and aperitif serves, the bar is hidden behind a sign for a fake psychic. Employees Only is also famed for its food menu, serving everything from Bone Marrow Poppers with Pastry Shell & Bordelaise to Venison Chop with Heirloom Carrots. 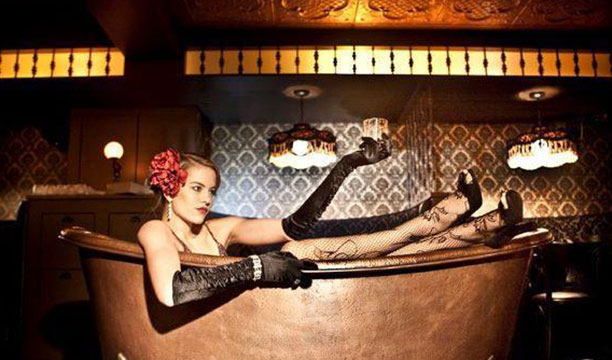 This authentic speakeasy-style bar pays homage to gin as the predominant alcoholic drink consumed in the US during Prohibition – there’s even a bathtub in the middle of the room. While the bar may be called Bathtub – named after the unsavoury alcohol that was flavoured with botanicals in people’s bathtubs – it serves only the finest selections. In keeping with the bar’s illicit image, Bathtub Gin can only be accessed via an organic coffee shop. 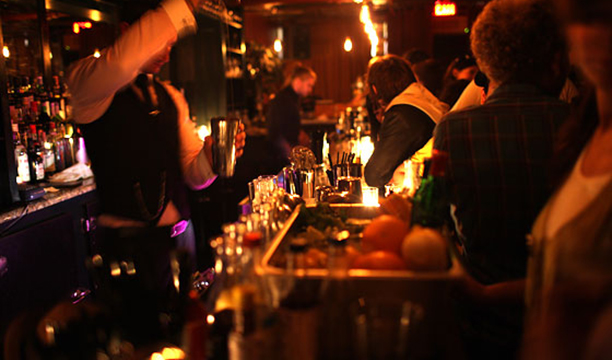 One of the best not-so-secret speakeasy bars in New York City, Milk & Honey was one of the first venues to pioneer a new wave of members clubs in the US. With a now equally famous sister bar in London, Milk & Honey NYC moved from its Lower East Side location in 2013 to a larger premises in the Flatrion District. Its comprehensive cocktail menu consists of Cobblers, Fizzes and Fixes, Shorts and Sours, and Restoratives, among others. 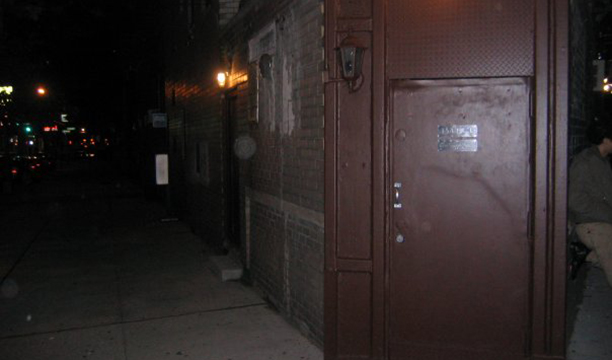 Opened by the founder of Milk & Honey, Sasha Petraske, Little Branch is located behind a non-descript rusted metal door on the corner of Seventh Avenue and Leroy Street. With regular live jazz performances and perfectly curated cocktails, the bar has a reputation for creating serves off the menu according its clients’ tastes. 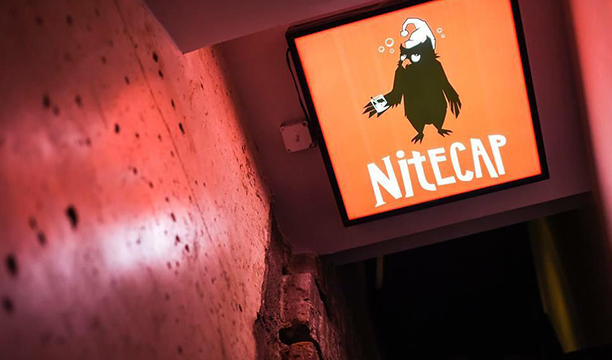 Tucked away in a basement underneath eatery Schapiro’s, Nitecap is the brainchild of the teamed behind fellow speakeasy Death & Co. Serving cocktails described as the “equivalent of putting on a comfy sweater”, the bar is renowned for its laid back, fun atmosphere, devoid of any pretentiousness exhibited by some of its speakeasy peers.