It’s certainly been a long winter, but as summer tentatively approaches now’s the time to dust off your Hawaiian shirt and seek the tropical solace of these world’s best tiki bars.

Tiki bars are Polynesian-style, exotically themed venues which rose to prominence in the US during the 1930s and 1940s, spurred by now iconic bartenders Donn Beach and Victor Bergeron.

Popularising kitsch, fruity, largely rum-based cocktails such as the Mai Tai and Zombie, early US tiki bars were said to cater to a newfound love of the South Pacific after the Second World War.

This concept soon spread across the globe, with tiki bars openings everywhere from Hong Kong to Berlin. While such bars hit the height of their popularity more than 50 years ago, there has been a nostalgic revival in the exotic concept, particularly as an antidote to the rise of more demur prohibition-style bars.

With an abundance of totems, grass skirts, cocktail umbrellas and, of course, rum, click through the following pages to see our pick of the world’s 10 best tiki bars. If you’ve think we’ve missed an essential choice off this list, let us know by leaving a comment below. 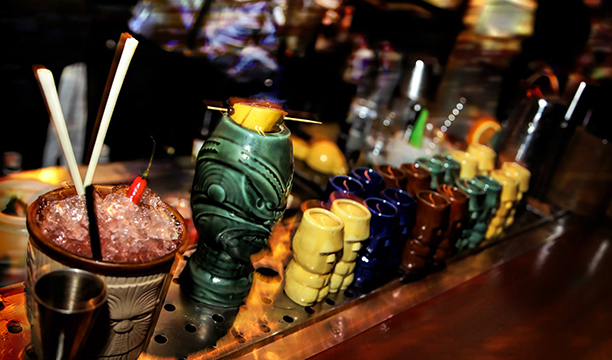 Named after a Polynesian greeting meaning, “kiss kiss”, Honi Honi brings a bright slice of relaxed beach life to the bustling, humid streets of Hong Kong. The venue strikes the right balance between the fun, over-the-top nature of a stereotypical tiki bar, and a stylish modern cocktail lounge, with an elegant design and impeccable service. The venue claims to sport one of the largest rum menus on earth and serves cocktails such as the Bikini Girl and Kung Fu Master.

Three Dots and a Dash – Chicago 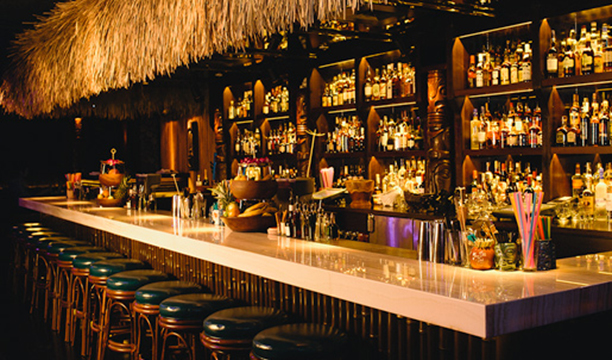 The windy city channeled the spirit of Hawaii when Three Dots and a Dash opened its doors in 2014. This stylish venue celebrates rum in all its forms, and also tips its hat to genever, mescal and Tequila. With a menu comprised of both classic and original recipes, Three Dots expands the tiki canon with its focus on dry flavours. The bar itself is named after a classic cocktail itself created by tiki forefather Don the Beachcomber to celebrate the end of the Second World War. Three dots and a dash is, after all, Morse code for “victory”. Clever. 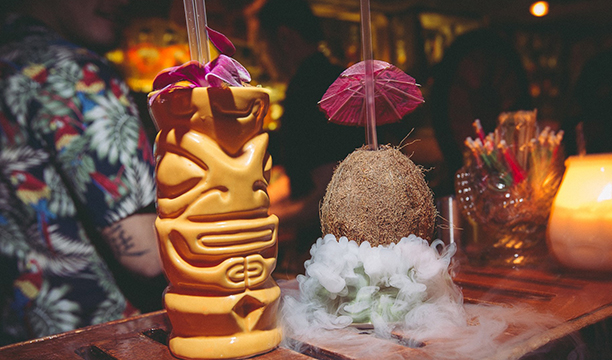 Mahiki has quickly gained a reputation in London as a hot spot for young celebrities go to hang out, and is purportedly Prince Harry’s favourite bar. Described as the “ultimate party destination”, Mahiki is based in the exclusive Green Park area of the city and is famous for its £20-£350 treasure chest sharing cocktails. The bar’s dimly lit, atmospheric interior certainly reflects its name – which is Polynesian for “path to the underworld”.

Witness the Tiki theme in overdrive at the much talked about San Francisco rum hotspot Smuggler’s Cove. Featuring traditional drinks of the Caribbean islands and classic libations of Prohibition-era Havana, the bar was a finalist for Tales of the Cocktail’s best American cocktail bar award. It features 200 variations of the spirit, including vintage and rare bottlings, as well as its own house rum produced by craft distillery St George Spirits. 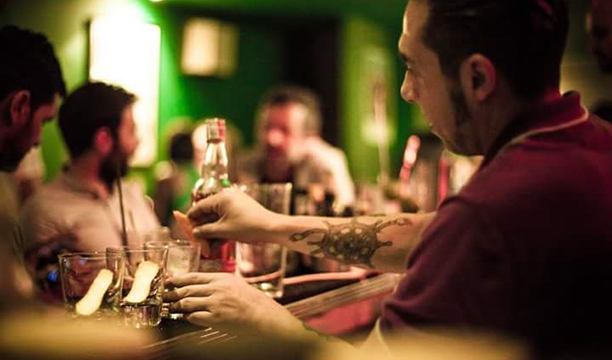 Said to be one of the best bars in Barcelona, Tahiti takes the tiki theme to heart in its traditional Polynesian décor, but also caters to contemporary tastes for short, dark drinks and classic cocktails. Of course, most visitors opt for the tropical serves based on original recipes from the 40s and 50s. 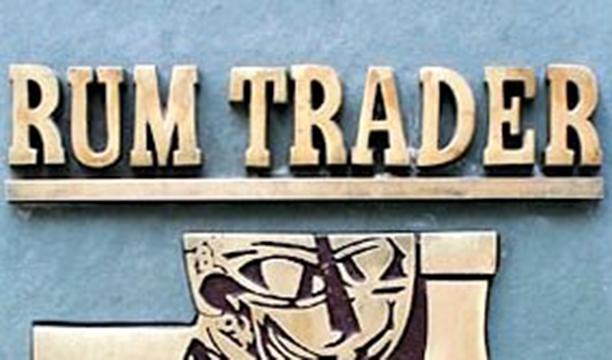 Berlin’s Rum Trader may be notoriously tiny, but certainly has no shortage of marvelous mixology delights. All served in vintage glass, the bar’s selection of fine rum-based cocktails gives the tiki theme a decidedly grown-up twist. Coconuts and grass skirts are also demonstrably absent from the Rum Trade, which channels a dark and brooding design reminiscent of pre-war Berlin. Having been founded in 1976 by Mr Schroeder, who worked at the legendary Trader Vic after the Second World War, the bar is now run under the watchful eye of the ever-dapper Mr Scholl. 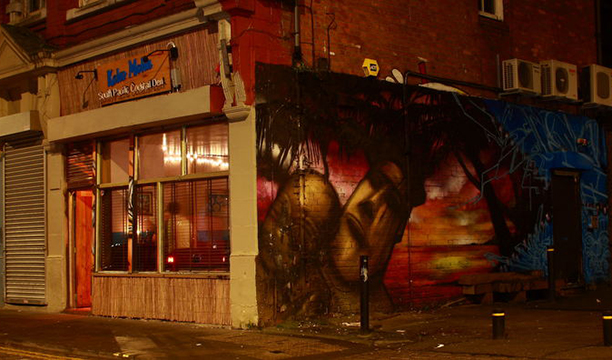 The north of England might not seem like a typical location for one of the world’s coolest tiki bars, but Manchester’s Keko Moku proves this is quite possible. With more than 50 different types of rum, this bar boasts a relaxed, sixties California vibe combined with a lively atmosphere and an abundance of Hawaiian shirts. Its fruity cocktails are expertly made, typifying tiki mixology its best – despite the inevitable dreary weather outside. 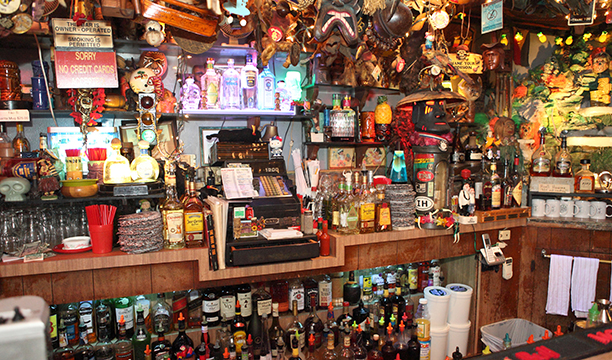 Based on Sunset Boulevard, Tiki-Ti is the smallest tiki bar on this list – with just 12 seats available – however is also boasts one of the most extensive cocktail lists, with more than 90 different mixes available. Considered by many to be the epitome of the tiki tavern, the bar has become something of an institution since was opened in 1961 by Filipino bartender Ray Buhen – who helped pioneer the tropical drinks craze in the 1930s. 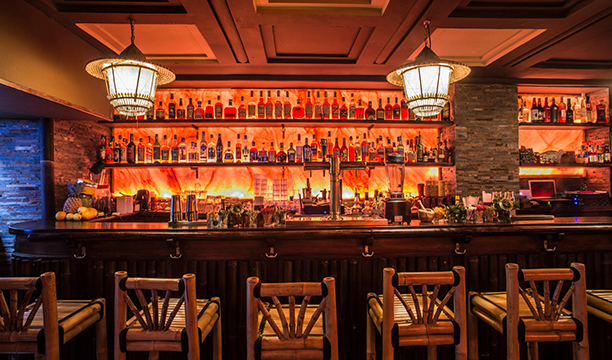 While most will expect sophisticated and demur cocktail bars in France’s capital city, Dirty Dick offers a welcome antidote with its kitsch, exotic décor, laid back atmosphere and fun, fruity drinks. With 55 different rums on offer, cocktails are served in an abundance of interesting vessels such as a miniature volcano, giant shell, totem heads and, of course, pineapples. 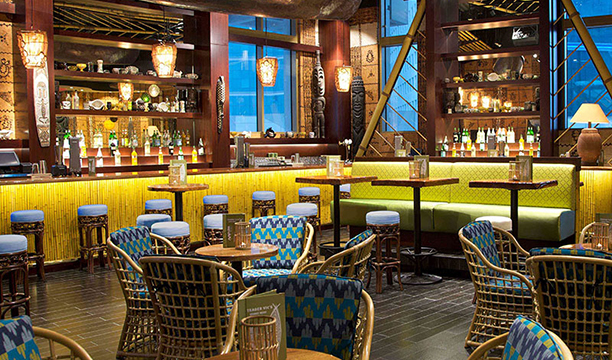 This international chain of bars and restaurants and was founded by the original tiki pioneer Vic “The Trader” Bergeron. After embarking on a trip to Cuba to immerse himself in all things rum, Bergeron brought his knowledge back to California, transforming his Hinky Dinks establishment into the tiki haven Trader Vic’s. Credited with creating the Mai Tai cocktail, Bergeron pioneered his concept bar across the globe, creating the most famous tiki franchise of all time.