The Scotch whisky industry has been warned not to take its success for granted, as exports decline in several key markets around the world.

Economic tensions, China’s on-going austerity campaign and increased competition in the US were largely to blame for a 7% fall in the value of Scotch whisky exports in 2014 to £3.95 billion, according to latest figures released by the Scotch Whisky Association (SWA).

Exports to Singapore, which acts as a regional hub for much of the Asian region, plummeted by 39% in value to £200m, partly due to the anti-extravagance measures in China, often the final destination for the majority of Scotch shipped to Singapore. Direct exports to China also fell by23% to £39m.

For Scotch’s largest market by volume, the US, widespread competition among premium brands was partly to blame for a 7% decline in exports in 2014.

The figures from the SWA are in contrast to the sales data released by the Distilled Spirits Council of the US (Discus) earlier this year, which showed just 1% sales fall overall, mostly from fading demand for blends.

Having failed to explain the decline in the US in previous years, the SWA now believes the disparity indicates widespread destocking in the market.

David Frost, CEO of the SWA, argued that the future of the Scotch whisky industry lies in the EU’s capacity to negotiate more Free Trade Agreements (FTAs) to encourage exports.

“Economic and political factors in some important markets held back Scotch whisky exports in 2014 after a decade of strong growth,” he said. “It shows that the industry’s success cannot be taken for granted and that we must continue to argue for more open markets and ambitious trade deals that tackle barriers to market access.”

Pointing to the success of the FTA between the EU and South Korea, the SWA has urged the next UK government to pursue similar agreements with the US, Vietnam and India.

The trade body successfully encouraged UK Chancellor George Osborne to cut duty on spirits, including whisky, by 2% in the Budget last month to “back one of the UK’s biggest exports”.

On the bright side

The picture was not completely bleak for Scotch, with several markets reporting robust growth and total exports performing slightly better in the second half of the year (-4%) than in the first (-11%).

Exports to France, the category’s second-largest market by value, were up 2% to £445m, demonstrating stabilisation in the country following a tax increase in 2012.

Volumes shipped to Spain were up for the first time in several years (1%); Taiwan’s love for single malt Scotch grew value by 36% to £197m; and despite a stubborn 150% excise tariff, exports to India grew 29% to £89m.

“The long-term fundamentals remain strong, with consumers in emerging markets wanting to buy Scotch whisky as a high-quality and authentic product with a strong reputation and clear provenance,” Frost added.

“This drives the strong investment in Scotch Whisky production in Scotland and the significant interest in entering the sector.”

The key findings from the 2014 Scotch whisky exports data from the SWA are listed on the following pages. 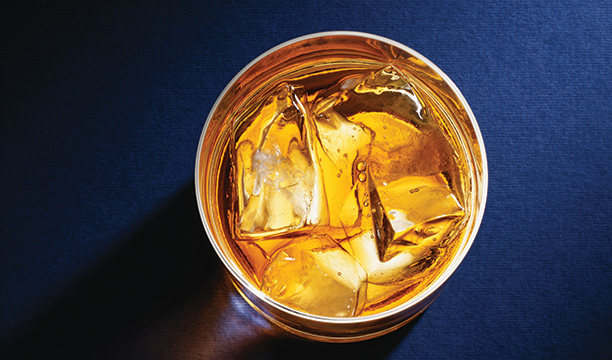 • Generally, growth is “consolidated” in developed markets, with “underlying strong growth” in emerging markets, although the landscape is somewhat mixed

• US declines due to destocking and increased competition in the market

Next page: The top 20 Scotch whisky export markets by volume 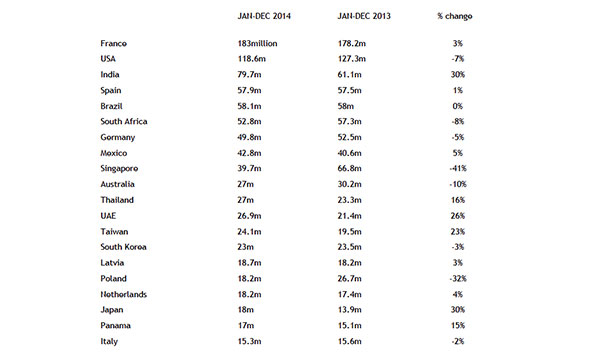 Next page: The top 20 Scotch whisky export markets by value 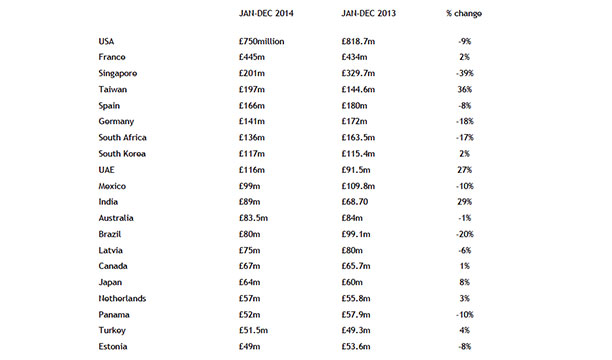