Grand Marnier has a history defined by family and celebration, but it could have been short-lived had it been resigned to the drinks cupboard like so many other liqueurs.

Small was evidently beautiful in late 19th century Paris where a young man would read the Petit Parisien over a petit café and dream of his petite amie, or girlfriend. But for the hotelier César Ritz there was nothing dainty about his friend Alexandre Marnier Lapostolle’s new orange liqueur. Created in 1880 as Curacao Marnier, Ritz declared the world should know it as Grand Marnier.

People had been making triple sec by steeping Caribbean orange peel in alcohol for decades, including the Marnier Lapostolles, who owned a wine business in the Loire and a small distillery near Paris. What set Grand Marnier apart from other brands, like Courvoisier’s that launched in 1875, was the inclusion of Cognac. There was also its suitably grand bottle modelled on an old Cognac still, hung with a red moiré ribbon and stamped with a wax seal.

Unlike most of its rivals which died of neglect in the drinks cupboard years ago, Grand Marnier survived as one of the world’s best-known liqueurs, selling 10.9 million bottles last year (IWSR) in over 150 countries. Even more remarkable is that this virtually one-brand company is still family-owned. There is Cognac Marnier, and the Chilean winery, Casa Lapostolle, but Grand Marnier Cordon Rouge “is about 90% of the business,” says Anne-Claire Delamarre, director of domestic sales, Latin America, the Middle East and travel retail.

If not stuck in a cupboard, Grand Marnier could have been trapped on the after dinner drinks trolley, like so many liqueurs. “If you look at it from a European perspective you think of it as an after dinner proposition,” says Delamarre. “But from a global perspective Grand Marnier is a very versatile brand.” She talks of three very separate markets: digestif, cocktails and gastronomy.

The last of these is based on the drink’s enduring marriage to Crêpe Suzette, especially in France. According to company folklore it was the famous chef, Auguste Escoffier, who first drenched a crêpe with Grand Marnier and flambéed it at The Ritz. While the legend is contested, there’s no doubt the brand still receives a big boost every 2 February on La Chandeleur, or Pancake Day. Unfortunately Grand Marnier’s culinary bond is almost too strong in France where “you don’t drink it, you eat it,” says Delamarre.

Changing that mind-set has been a priority for the brand and its European distributor, Diageo. “Over the past five years we’ve done a lot of work in terms of educating people on long drinks like Grand Marnier with tonic, ginger ale or orange juice,” claims Delamarre. “We study trends in each market, and then try and work with the best bartenders to create recipes.”

North America is by far the biggest market, accounting for 7.1m bottles last year (IWSR), or two thirds of the total. Grand Marnier crossed the Atlantic before the First World War and was served on the Titanic, but it took time to catch on. “We really established distribution in the USA in the 1960s,” explains Delamarre, who believes the brand’s relatively low profile at the time helped. “It’s always easier when you don’t have a strong image.” Free of baggage and preconceptions, she says: “The brand took off in the 1990s really because of two phenomena. We decided to focus on the Margarita when it was very popular in the US, and it was also the time when Americans were starting to trade up to premium cocktails.”

Consumers were encouraged to pour themselves a Grand Margarita – three parts Grand Marnier to four parts Tequila, in a long-running campaign dating from 1995 when Möet Hennessy was appointed US distributor. Last year the distribution deal was extended until “well into the future”, to quote a company spokesman. Meanwhile the brand’s second biggest market, Canada, has been handled by Diageo since 2008.

“Being able to be with big companies like Diageo and Möet Hennessy really helps drive the business forward,” says Delamarre. How long these two giants will happily keep selling the brand without a share of the equity remains to be seen. Last June Diageo pulled out of distributing José Cuervo because the Beckmann family refused to sell it to them for US$3 billion (£1.8bn). Grand Marnier would be a lot less, not that it’s for sale.

Most family firms fail to make it beyond the third generation, let alone the sixth in the case of Grand Marnier. With less than 10 family members involved under chairman Jacques Marnier Lapostolle, the boardroom is not overcrowded. For Delamarre, the main advantage of being family-owned is “the long-term vision and consistency on quality, pricing and distribution. We’ve been investing a lot behind the brand year after year”. She believes it also benefits the production side where the firm is the fifth biggest Cognac buyer with over 200 suppliers in the region, some of whom go back generations. “I think being a very stable family company gives the growers trust.”

The spirit is aged at the family’s Château de Bourg in Cognac for three to five years, while the green oranges (Citrus Bigaradia) are picked at the family’s 500 hectare estate in Haiti, and the skins dried in the sun before they are shipped to France. Macerated in neutral spirit for three weeks, the Cognac is then blended in and left to marry in oak vats. Higher proportions of older Cognacs are used for the Cuvées that include Louis-Alexandre, Quintessence and the 1800 which retails for US$299 in America. There are also flavoured versions like Titanium and Raspberry Peach, both launched last year.

Delamarre accepts Grand Marnier is a mature brand in Europe and North America, but says of markets like Asia: “We’re at an early stage. We’ve got distribution, but consumer awareness levels are very low.” With Asian consumers already keen on Cognac and happy to embrace France’s luxury image, she believes the region has great potential for Grand Marnier. And, at just 434,000 bottles in 2013 (IWSR) for the whole of Asia Pacific, there’s certainly room for growth.

Click through to the following page to see the timeline of Grand Marnier’s brand history. 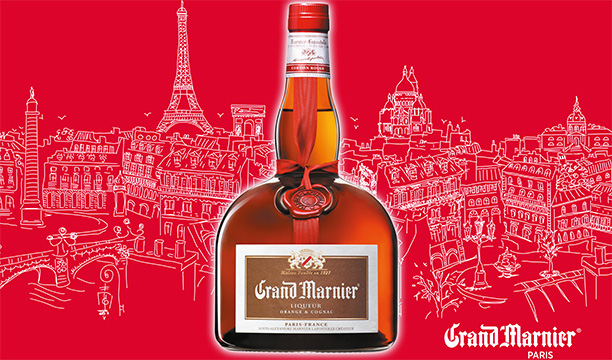 1912: Grand Marnier served onboard the Titanic

1921: The family acquires the Château de Bourg-Charente in Cognac

2013: GM Titanium and Raspberry Peach launched in the US