Low-alcohol cocktails are not just a January fad. As Dinah Sanders discovers, there’s a serious argument for including them on drinks menus all year round

“The best drink is one that leaves you happy to have another,” say drink historians Jared Brown and Anistatia Miller. To which I’ll add, “and one which you don’t later regret”. While January often brings a focus on health and moderation, there’s year-round pleasure to be had in a balanced approach.

Far from being a step back from “proper drinking”, low-alcohol cocktails offer a full spectrum of options that have been enjoyed since the cocktail’s earliest days. Rene Hidalgo, head bartender of Grand Banks in New York City, notes: “The biggest misconception about low-alcohol cocktails is that this is a new thing. Well, have you ever had a Kir Royale?” Low-alcohol cocktails are not a short-term trend, but rather a return – as with the revival of great variety in ingredients – to tradition. They’re back, and from what we’re seeing around the world, they’re back to stay.

Yao Lu, formerly of Anvil in Houston and now head bartender and owner at The Union Trading Company in Shanghai, has an approach Harry Johnson would have blessed 125 years ago. “Folks come to a bar for various reasons; you could be celebrating a birthday, an anniversary, a raise, or for the complete opposite,” he says. “The only, and I say only reason for a bar to exist in the first place is for people to walk out happier than when they came in. Therefore it’s up to us as bartenders and hosts to make sure this happens regardless of how much they can drink.”

As Lu points out, it’s about an experience; people don’t come to restaurants merely to get full and they don’t visit bars just for the sake of drinking. Jennifer Colliau, head bartender of The Interval in San Francisco and founder of Small Hand Foods, also celebrates this essential social aspect: “You don’t have to partake in the booze to be part of the community at a bar.”

An emphasis on the guest’s happiness is at the core of the best service in the UK as well. The menu of Artesian Bar at the Langham Hotel in London lists alcoholic and non-alcoholic cocktails together without any distinction. Bar manager Alex Kratena says: “We feel that if there are so many amazing vegetarian dishes, if chefs don’t need meat on every plate, why should we limit ourselves only to alcohol? We don’t want to disappoint a guest who can’t or simply doesn’t want to be drinking that night to feel pushed to the side, or pointed at by their company. We want them to enjoy delicious and beautifully presented drinks.”

In awe of the aperitif

Trick Dog in San Francisco and Le Lion Bar de Paris in Hamburg both place low-proof at the front and center with signature drinks. Trick Dog’s house aperitif (the Haberdasher) is available in a single serving or bottled for a group, while Joerg Meyer of Le Lion is often found welcoming his guests with a tray of glasses of Coquetiez du Lion, their beautiful variation on the Martinez (50ml of Lillet Blanc, 20ml of Tanqueray gin, 3 dashes of Peychauds bitters; stir, strain, serve, lime twist).

Hidalgo sees low-proof as a rising trend in the US as well. “Low abv drinks are starting to be viewed in a different form by the drinking public and by American bartenders,” he explains. “It’s being regarded as a category in its own right, and that’s fantastic. In recent years, renewed interest in vermouths and the huge boom in popularity of amaro have done a lot to elevate the format.”

As the category grows in attention, everyone is digging deep into what makes low-alcohol drinks work best. Colliau advises considering carefully how to replace the volume of omitted higher-proof ingredients: “Teas and tisanes can be great extenders, and often can mimic qualities of certain alcohols, like lapsang souchong for Scotch because of the smokiness, or hibiscus tisane for wine because of the tannins.

“I’ve found great success with bitter Italian sodas like Chinotto and Sanbitter, as they have complex elements that Americans usually associate with alcohol, and elevate a low- or no-abv drink from the realm of fruit juice and soda. You want to add complexity to make it taste ‘adult’.”

Ingredient choice is also a chance for local flavour to shine, as Lu points out: “For us here in Shanghai, it’s important to source and use what’s uniquely available here in Asia. In other words, creating shims [drinks with less than 15ml of high-proof ingredients of 40% abv or above] with an uniquely Asian twist that might not be available anywhere else.”

Wherever you are in the world, put as much effort into your low- or non-alcoholic cocktails as your regular menu, and the benefits are clearly obvious: happy drinkers make for a thriving business. 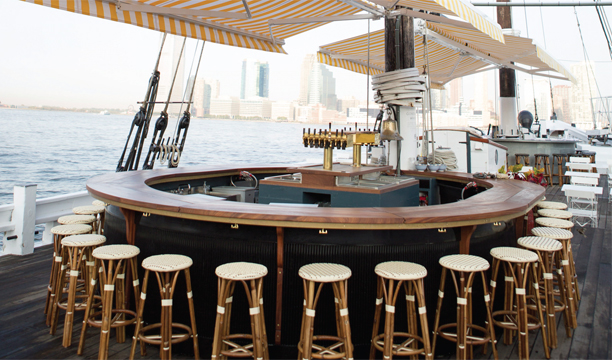 “One of the fantastic challenges about Grand Banks was the necessity for a sizable low-abv cocktail menu,” says Rene Hidalgo, bar manager at Grand Banks in New York.

“The Negroni is the classic that mainstreamed the most in the last decade, so that was the first place I looked. One unsung, classic variation on it is the Negroni Sbagliato, or a ‘wrong Negroni’; to make it we just swap out the gin for sparkling wine. And it’s fantastic, simple and has that same play of bitter Campari with the sweet, herbaceousness of vermouth, just lighter bodied with a bit of sparkle.

“An original I created was the Montenegro Royale: Amaro Montenegro, some sweetened ginger juice, fresh squeezed lemon juice and muddled strawberries, all served in a tall glass on crushed ice, topped with Champagne.

“Grand Banks is a great place to play with low-abv drinks, simply because you’re outdoors during the spring and summer, so you really don’t want something heavy and strong. You want something with some kick, but you need to feel hydrated at the same time.”