As the world’s top international gin brand and with its 250th anniversary approaching, Gordon’s really has stood the test of time.

*This feature was first printed in The Spirits Business November 2014 issue.

London was recovering from its worst ever hangover when Alexander Gordon opened his gin distillery there in 1769. It was only 18 years since Hogarth had published his famous Gin Lane print depicting the city as a gin-sodden den of depravity. Gin was the spirit of the gutter that offered its drinkers a fast-track to oblivion. It was said sex and drink were the only enjoyments available for the poor, and of these, drunkenness was the most popular.

“Alexander Gordon really was one of the first gin distillers to set up a reputable gin company in London,” says Diageo senior archivist, Joanne McKerchar. As evidence of his commitment to quality, she points to how he made his son, Charles, do a full seven-year apprenticeship before taking over the reigns in 1823. Back then “they would have been producing a sweetened Old Tom style of gin, until continuous distillation kicked in in the 1830s,” she says. The resulting high strength neutral spirit allowed the London dry style to develop, though the term did not appear on Gordon’s distinctive green bottles until the early 1900s. By then the business had passed from the Gordon family and merged into Tanqueray Gordon & Co – the world’s largest gin house.

Exports were growing and “wherever the expat community went, Gordon’s seemed to go too,” says McKerchar. Gin brought a taste of home to the far-flung tea estates and rubber plantations, and helped the tonic water slip down with its bitter, anti-malarial quinine.

When the tea planters returned home they brought back the G&T, which still accounts for the lion’s share of Gordon’s drunk in Britain – the brand’s biggest market with sales of 1.25 million cases last year (IWSR).

Back in the early 20th century, London dry gin was just one of the spirits flowing from the firm’s Goswell Road distillery near the Barbican. “Gordon’s were incredible with what they experimented with,” says McKerchar, who lists a string of flavoured gins and liqueurs including peppermint, cloves, lovage and orange bitters.

To this, she adds the Gordon’s shaker cocktail range, launched in 1924 by the firm’s new owners – DCL (now Diageo) as one of the first RTDs and an example of how innovative the brand was. “People wanted to throw the perfect cocktail party, and Gordon’s realised they didn’t quite understand how to do it.” Yet by the 1960s flavoured gins were fading out and gin itself was in serious trouble. Its image was dusty, middle-aged and suburban compared to a thoroughly urban spirit called vodka.

In America, where Gordon’s had a distillery in New Jersey since the end of Prohibition, the rival white spirit appeared unstoppable. No-one made Martinis with gin anymore, and in a slightly desperate move DCL launched Gordon’s vodka in the late 1960s. Today the focus is firmly back to gin in what is the brand’s second biggest market. Yet life is not easy in the States, where sales slipped 7% last year to 645,000 cases (IWSR) and Charlie Downing, Gordon’s global marketing manager, accepts there may be a slight taste barrier with London dry gin. That sharp juniper hit can be a little too close to pine needles for the American palate.

“Gordon’s is the gin-iest of gins. It’s very juniper-forward and unapologetically so,” says Downing, who suggests the growing US trend for gin and juice makes that less of an issue. Possibly more problematic is the quality of American tonic water which tends to be sweetened with fructose or corn syrup and less bitter. Mixed with a bone dry British gin the result can be disappointing.

Gordon’s is married to its mixer of choice more than most spirits and clearly uses a fair amount of tonic for its canned G&Ts. It engaged in joint marketing with Schweppes until the 1990s, yet seems never to have considered launching its own tonic water.

Maybe that’s a missed opportunity? Of its 4.4m total sales (IWSR 2013), Downing says up to 70% are in Western Europe, supplied by Diageo’s giant spirits factory in Fife. Gordon’s moved to Scotland in 1998 having diluted its UK strength to 37.5% abv six years earlier. This was not to stretch supply like a certain American whiskey brand, but simply to shave a few pence off its tax bill to compete with vodka and the surge in supermarket own-label gin.

Behind the scenes they worked hard to ensure Gordon’s quality wasn’t compromised, but the act of dilution gave its rivals a stick with which to beat it. It is telling that when the supermarket Waitrose launched its own gin, it went for 40% abv.

In 2002, after a decade of declining shares in the UK, Gordon’s underwent a £15m re-launch including a smart, new bottle. By then Hendricks was on the scene as the brand credited with leading the whole premium gin renaissance and inspiring countless others to follow in its wake. “I really admire the way in which Hendrick’s has re-energised the category and helped people see gin in a different light,” says Downing. “As we see the explosion in new gins, frankly I hope they continue to flourish because it’s creating excitement, broadening the category and bringing people into gin.”

Leaving aside the Philippines’ Ginebra San Miguel which may well sell more bottles, Gordon’s is the category leader among international gins, though it hasn’t been leading from the front lately. In 2013 it flattered Hendrick’s with its Crisp Cucumber variant, followed by the slightly more innovative Gordon’s Elderflower this year.

But with 245 years of distilling history there’s no shortage of archive material to inspire future innovation. For Downing, Gordon’s brand values are “quintessentially British, quirky and a little disruptive”, and these have been well-communicated in recent adverts featuring the Life on Mars actor Philip Glenister. If Downing’s wish comes true and gin drinkers swing back to “the original”, this sleeping giant may start to wake. As he says: “It is a brand of substance that has stood the test of time.”

Click through the following pages to see the timeline of Gordon’s brand history. 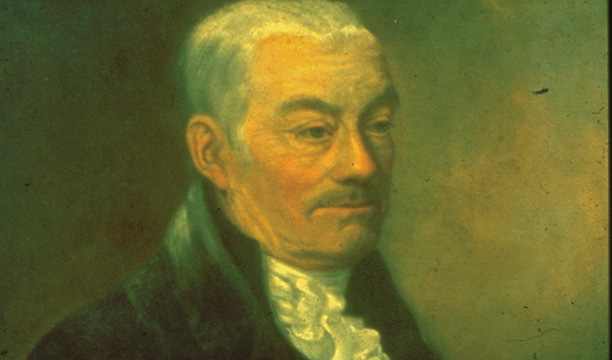 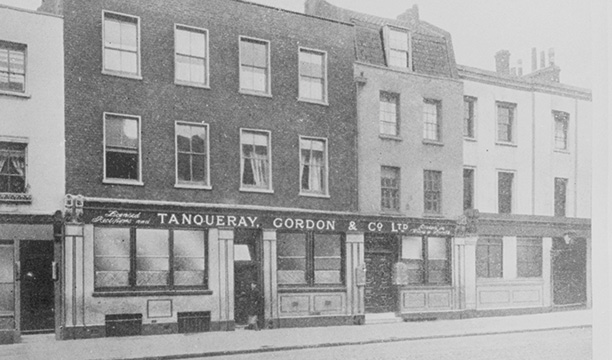 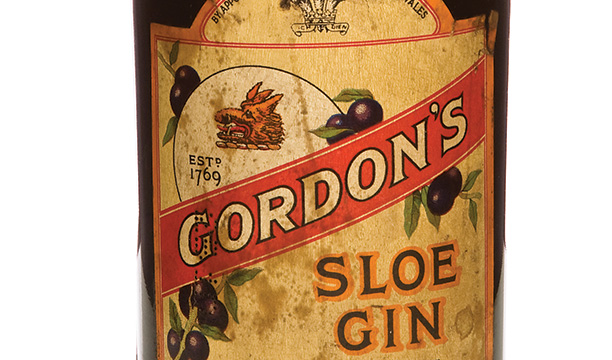 Gordon’s experimentation with flavours begins as the brand launches its Sloe Gin variant. 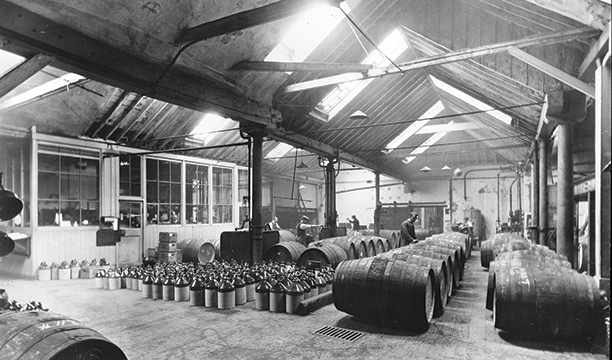 Gordon’s US distillery opens in New Jersey shortly after the end of Prohibition. 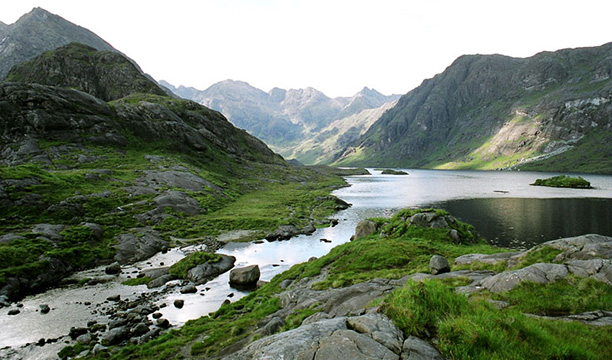 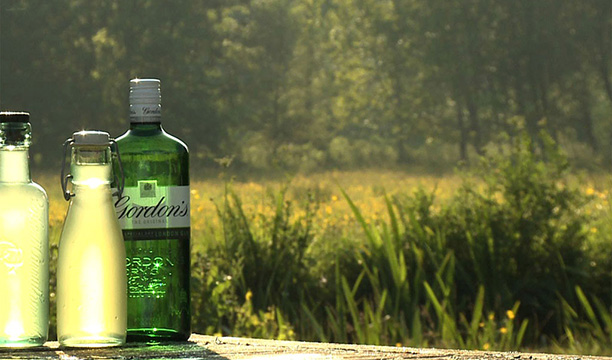 Gordon’s is re-packaged as part of a £15 million re-launch, and a bid to compete against the premium credentials of Hendricks. 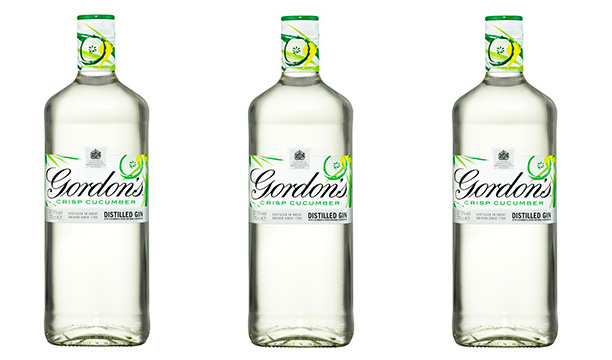 The brand makes its much-anticipated foray into the modern flavoured spirits sector with the launch of its Crisp Cucumber variant, followed shortly afterwards by its Gordon’s with a Spot of Elderflower.