Christmas may be over but baby it’s still mighty cold outside, which is why we asked some of the best bars in the chilliest parts of the world to divulge their favourite hot cocktail recipes for banishing the winter blues.

There’s nothing like stepping into a warm bar from the cold with the smell of spices and, if you’re lucky, warm cookies in the air, wafting over from steaming mugs of Hot Toddy’s and warm cauldrons of mulled wine sitting temptingly on the edge of the bar.

But in this era of modern cocktails, it’s time to progress on from traditional drinks consumers come to expect at this time of year; impress and entice them with something a bit different this winter.

Spice up your Hot Chocolate with Tequila and cayenne pepper for a truly warming Mexican drink, or add a shot of Branca Menta for a more herbal twist. Premiuise your Toddy with herbs and spices, or add a knob of indulgent butter to a hot rum drink to really warm your patrons’ cockles.

If you’re after some inspiration this winter, you’ll find some of the best hot cocktail recipes from across the globe on the following pages. 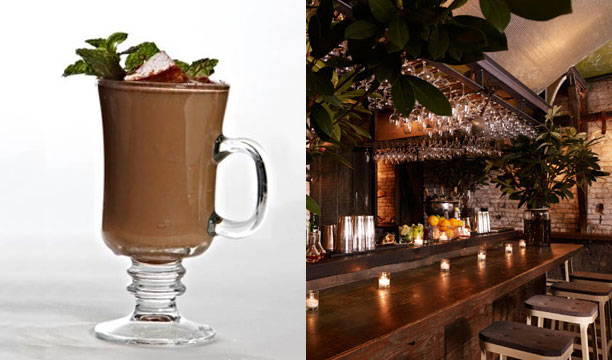 This soul-warming drink, created by The Third Man head bartender Erin Sullivan, is a boozy, indulgent treat with a spicy herbal kick from the Brance Menta and cayenne pepper. 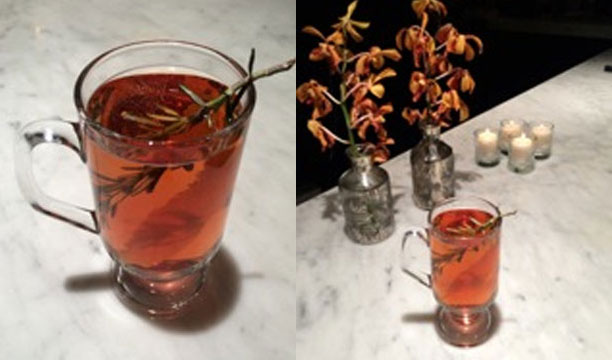 The Seaside Toddy at Anfora provides the ideal combination of warming ingredients and flavours for a cocktail that is perfect for cooler weather. Starting with a base of Bruichladdich Islay Scotch and housemade Genièvre syrup, the cocktail incorporates seasonal ingredients including cranberry juice, charred rosemary, and lemon zest for a fresh citrus note to complement the sweet cranberry. 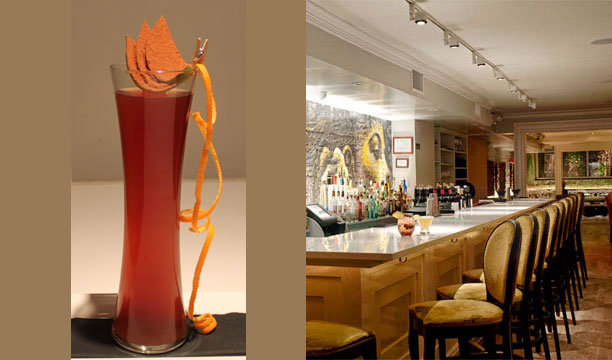 New York Spanish tapas bar Andanada is doing its best to warm up patrons this winter with the Cardinal’s Remedy, it’s featured cocktail of the week. A blend of brandy, Grand Marnier, sherry and spiced tea, its warming flavours and aromas are drawing in the crowds in the cold weather.

The Red Queen by Pasdeloup, Paris 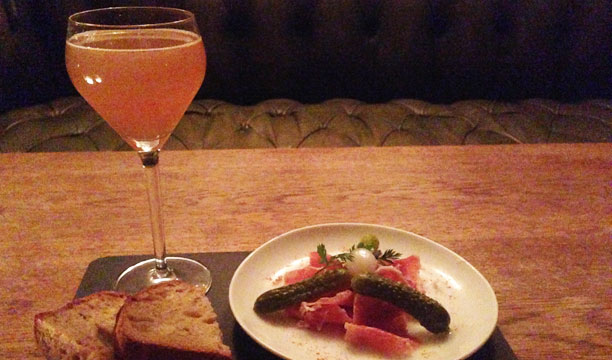 This cocktail incorporates the woody notes of amontillado and the brightness of a sweet french Vermouth to its advantage to create a drink that warms up the palate, the honey and rum interplay for a sweetness that calls for a plate of Parma Ham or Pata Negra. The drink will feature on the Parisian bar’s next menu in February, which has an Alice in Wonderland theme.

Method: Add all ingredients in the shaker,  shake with ice cubes, double strain into a chilled cocktail glass into which 5-10 drops (depending on desired spice content) of BBQ bitters have been added. Garnish with an untreated orange zest out and a drop or two of BBQ bitters. 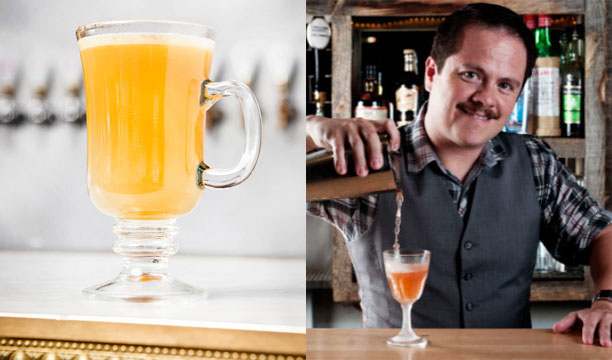 Erick Castro, of Polite Provisions in San Diego, warms his visitors back up to functional temperatures with a spiced Hot Buttered Rum that fills the room with comforting aromas of caramel and baking spice with hints of oatmeal cookie.

Hot Buttered Rum
Ingredients:
40ml Demerara Rum
95ml Allspice Syrup
1 small pad of butter (about as much as you’d put on a piece of toast)
Method: Temp your glass with hot water and discard, then add the butter and splash of hot water to melt the butter.  Add the rum and allspice syrup and mix. Top with fresh grated cinnamon. 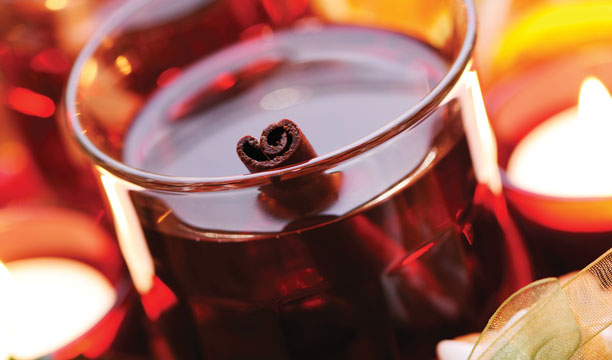 Naren Young of Bacchanal in New York offers this more upscale version of a Hot Buttered Rum, with the indulgent addition of truffle butter and Licor 43, for a richer, more complex flavour.

Method: Pre-heat a Toddy glass. Add all ingredients and then butter. Once dissolved grate cinnamon stick and drop in glass 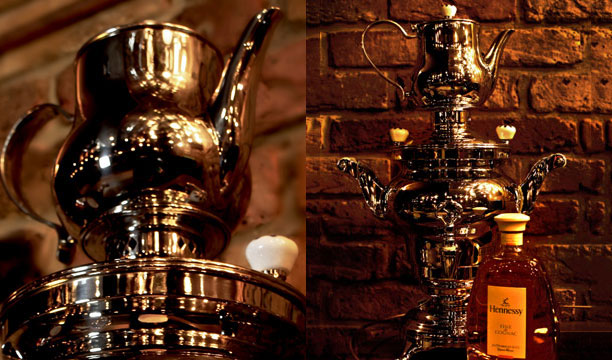 Sometimes all that’s needed to thaw freezing hands and banish winter colds is a lovingly-made Hot Toddy, and London’s Nightjar has absolutely perfected their recipe. Using Cognac rather than Scotch or Irish whisky, their drink additionally features pear cider and apple-rhubarb juice with a warming spice hit from a chai tea bag. The bar serves their Hot Toddy from a Russian samovar vessel. 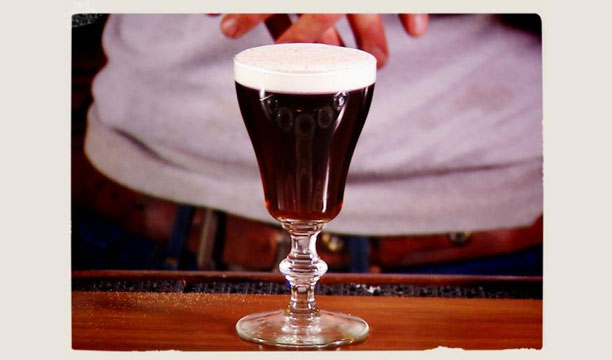 Rumoured to be one of the best Irish Coffee’s around, this concoction by Jack McGarry and Sean Muldoon at New York’s famous Dead Rabbit Grocery & Grog uses some of the finest Irish whiskey for a real authentic flavour. You’d expect nothing less from the bar that specialises in Irish whiskey though. 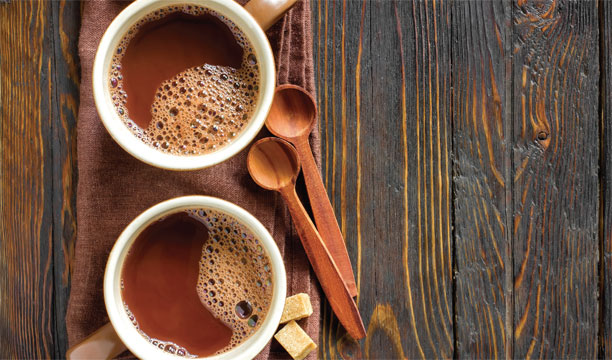 Bacchanal bartender Naren Young has leaned on his thorough knowledge of Tequila and Mexico to create an authentic and delicious take on a traditional hot chocolate. Sweetened with Frangelico and agave nectar, which highlights the reposado Tequila in the drink, this Mexican Hot Chocolate promises to spice up the coldest of days.

Method: Place the chocolate into a very hot, pre-heated coffee mug. Add the remaining ingredients and mix well until chocolate is dissolved. Sprinkle with cocoa powder. 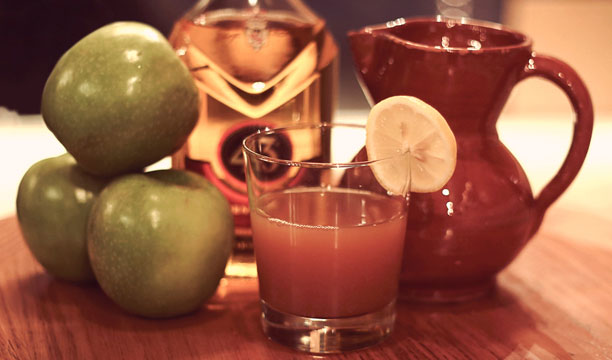 Zack Bezunartea, beverage director at Tapas bar Boqueria, which has locations in Flatiron, Soho and most recently the Upper East Side (as well as Washington, DC and Hong Kong), created a series of warming winter cocktails late last year, including the Bitter Candied Apple, a warm drink made with apple cider, Licor 43, Jack Daniels, lemon juice and Angostura bitters.