Formula One team Sahara Force India has agreed a sponsorship deal with Jose Cuervo Tequila for the 2015 F1 season, but “jumped the gun” on renewing its agreement with Smirnoff vodka.

Jose Cuervo International has agreed a 12-month partnership with the team, owned and headed by United Spirits chairman Vijay Mallya, in which the Tequila brand’s logos will appear on the cars’ headrests, drivers’ suits and all team clothing.

Mallya said: “As we get set to launch our 2015 season, it’s the perfect time to welcome Jose Cuervo to the team.

“It’s an exciting time to join our team off the back of our most successful season ever and we look forward to celebrating a memorable year of racing together.”

Diageo, which sponsored the team with its Smirnoff vodka brand last year, claims to still be in discussions over renewals of its agreement, despite Sahara Force India unveiling its new-look car and team outfits for the year complete with Smirnoff’s logo at the Soumaya museum in Mexico City today.

A statement from Diageo read: “We were very happy with the sponsorship between Smirnoff and Force India last year, especially given their impressive performance on track. We are currently in discussions with Force India with regards to a potential extension of this sponsorship for the 2015 season.”

This year Sahara Force India has placed Smirnoff’s branding across the front of the drivers’ outfits, just above large orange branding for Mallya’s Indian beer, Kingfisher.

A spokesperson for Diageo confirmed it has asked the F1 team to retract its announcement and imagery of the car and outfits featuring Smirnoff branding, but could not confirm when an agreement is likely to be reached. 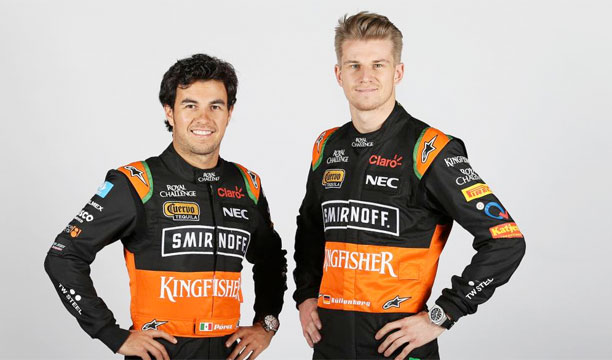 “Everyone at Jose Cuervo believes that 2015 is a year of great potential for this team, especially in the build up to the Mexican Grand Prix later this year,” Beckmann said.

The news comes amid heated debates over the future of alcohol sponsorship in Formula One, in which some trade bodies claim the sport is creating a “troubling” association between drinking and driving.

However, Diageo has defended its support of alcohol sponsorship in the sport, claiming it aims to “drive positive change” through its involvement in F1 with a message to “never drink and drive”.