It takes a certain kind of courage to commit everything into starting a spirits company marketed solely at bartenders. Becky Paskin meets Simon Ford who, with the unique 86 Co., did just that

“When I was 14 I decided to start a rock band with my friends,” explains Simon Ford, who is still something of a wild child to this day. “We talked about the band name, who would be the drummer and the lead guitarist, but of course none of us had picked up instruments before. That was kind of how the 86 Co. started out.”

Arguably all professional bartenders are big kids — creative, passionate and out to have fun; the bar is their playground. But just like anyone starting out in a new business for the first time, it takes a certain amount of drive, courage and perseverance for those bartenders to become entrepreneurs, as Ford found when he launched the 86 Co. in New York in 2012.

Despite going without a salary for six months, enduring sleepless nights on friends’ couches, hitting almost every barrier possible along the way, the group has been welcomed by the industry with open arms. The concept was stumbled upon by Ford and former Absolut US marketing director Malte Barnekow some six years ago in the back room of Employees Only in New York.

Taking inspiration from the venue itself, designed as an after-hours bar for bartenders, the premise of 86 Co. was to create a line of spirits – currently a rum, vodka, Tequila and gin – designed for the on-trade to mix in cocktails.

“I’ve always campaigned that we should listen to bartenders when developing new products, but I thought what if we created a product that’s 100% for bartenders?” Ford says. “We ran a survey and I was hoping the 150 bartenders we asked would give some unique ideas, but the majority of them said they just need more good mixing spirits. So we developed our concept around that.”

Ford previously worked with Pernod Ricard as US director of trade marketing and brand education, but is most recently remembered for chugging two bottles of Champagne onstage while hosting the Spirited Awards in New Orleans this year, in true rock ’n’ roll style. He developed the idea for 86 Co. with Barnekow along with help from Dushan Zaric and Jason Kosmas, founders of Employees Only. The only problem was that all four of them were essentially bartenders and brand ambassadors; none had any financial background. So friend and investor Kris Roth, a sales professional with ADP TotalSource, completed the five founding fathers of the company, bringing with him some much valued sales and business expertise, as well as all-important capital.

“We decided we all needed to get in the game or else we wouldn’t commit, so we all put in whatever we could afford,” Ford says. “They say only three people invest in a company that hasn’t sold anything: founders, friends and family, and fools. The three Fs they call it.”

Only fools rush in

The five founders could easily have fulfilled the three Fs themselves, for if it weren’t for their infectious dedication and passion, foolish they would be. Without much experience and only a brimming contacts book to rely on, the journey from conception to shelf was one of trial and error and full of setbacks. The company was turned away from eight rum distilleries “who didn’t understand what we wanted to do”; the first run of Tequila bottles leaked; at least 10 incarnations of the bottle design were rejected; and the TTB rescinded their labelling approval at the last minute.

“We were knee deep in debt and were about to launch knowing we needed to soon or else we’d be bankrupt before we sold a bottle, when the TTB stepped in,” Ford laughs in hindsight. “We couldn’t afford to re-label the products, so we got the lowest paid person we could find to go into this government warehouse and Sharpie over the offending parts on every bottle. Of course our brand new, proud label ended up on the shelves with black lines all over it.”

But the goal to give bartenders something they’d never had before was too strong, and despite being hundreds of thousands of dollars in debt, the group soldiered on. The most important aspect to get right was the liquid, which Ford says needed to be “Jacks of all trades, masters of none”. All four products in the range are made at different distilleries, handpicked by the team for their ability and willingness to work with a crackpot team of bartenders to create a very specific style of spirit.

The current line-up includes Caña Brava rum from Las Cabras Distillery in Panama, Ford’s Gin from Thames Distillers in the UK, Tequila Cabeza from El Ranchito in Jalisco, and Aylesbury Duck Vodka from Canada, although Ford promises more products will be rolled out in the future. Designed as America’s answer to Havana Club, it was thought Caña Brava would be the flagship product, but although it has been warmly received, it’s Ford’s eponymous gin that’s made waves, accounting for 45% of group sales. Ford is unashamedly honest about his ambition to bring gin back to its roots with a traditional, viscous dry style that works well across a variety of drinks, from Martinis to G&Ts and Collins.

But while the reception in the US for Ford’s Gin has been astounding, its creator doesn’t expect the same performance on British shores. “In England everybody and their mother is making a gin with Charles Maxwell at Thames Distillery right now,” he says ironically. “So I don’t expect ours to do particularly well in London. It will do fine, it tastes great, but we have no uniqueness and it’s such an over-saturated category there right now.” Caña Brava on the other hand is already on World’s Best Bar The Artesian’s new menu in the form of The Weekend Lover. “Funnily enough, we thought it wouldn’t do well in London because they have Havana Club, but it’s the contrary; everyone’s discovering they now have some choice in rums of that style.”

Aylesbury Duck Vodka meanwhile is a less serious, tongue-in-cheek in-joke. It’s a decent sipping and mixable vodka, but the labelling is the genius part. “I tried to create the most bullshit label I could,” admits Ford.

The labelling claims the vodka is “distilled many, many times”, is made with “really, really clean water”, and “inspired by a noble woodland bird” that can “hold its own in a casserole”. Ford explains: “I was so sick of vodka marketing crap, but funnily enough it got approved and was the first one that was released.”

Ironically, while 86 Co. jumped through hoops to get the fact-packed labelling for its gin, rum and Tequila approved, the TTB allowed Aylesbury Duck through on its first submission. “It’s so ridiculous that if you bullshit you can get approved, but if you want to tell the truth, you can’t,” he laughs.

The range has the makings of a cult product line for the global on-trade, but therein lies 86 Co.’s Achilles’ heel, says Ford. “Everything is in the same bottle, everyone calls us the range but of course nothing comes out of the same distillery.” Only two years old, the bottle is already iconic in itself but only came about after the team stumbled upon the idea that creating their own bottle mould would in fact be cheaper than buying someone else’s design.

Having already consulted bartenders over the liquid, 86 Co. decided to gather opinion over the bottle design too. “They said the neck was very important, as were things like labels they could peel off so they could reuse bottles, but there were also complaints about the difficulties in holding a bottle in litre sizes.”

The design process was made easier by employing the services of a friend of a friend who happened to have designed the water bottles for Evian. After years of bartender testing and several prototypes, the outcome was a revolutionary ergonomic bottle designed to lessen physical impact on bartenders when pouring, reducing strain from repetitive movements. It also features peelable labels, a grip around the middle and a scale up the side to allow the bottle to be reused for batched cocktails and syrups.

From start to finish, the concept took 86 Co. six years. Now, nearing its second birthday, the company is in 23 US States and Australia, and is now in the UK, Sweden and Canada, the latter pending approval.

While Ford anticipates 86 Co. will break even by the end of year three, more than doubling its sales in year two – from 12,000 nine-litre cases to 32,000 cases in the US alone – he is still reluctant to believe the group’s cash flow and regulatory struggles are behind them. “We need to be about five times bigger than we are now and then I will start breathing easily, but I have definitely started sleeping now.

“Not getting paid for as many months as I did was a strain on me personally. But as I see the company growing a little bit I start seeing a future where we might be able to sustain ourselves on good salaries and get back to where we were when I was working for a bigger company. Of course things will be better though because I get to make all of the decisions.”

Unlike most big kids with a dream, regardless of whether it’s to start a rock band or launch a gin, Ford and his friends have been courageous enough to make theirs a reality. 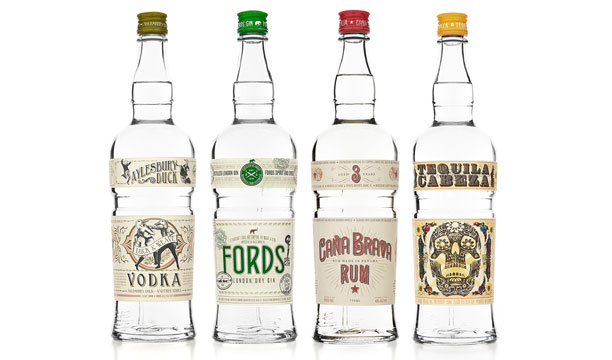