The world’s 10 most haunted bars

In celebration of Halloween this Friday, we’ve listed the world’s most haunted bars full of ghoulish spectres, malevolent ghosts and downright terrifying occurrences.

With histories which date back hundreds of years, it’s no wonder some of the world’s oldest bars, pubs and hotels are home to some of the spookiest ghost stories on earth.

Many of these bars have been the scene of grisly murders and chilling tragedies. Whether a lovestruck teenage girl or a shamed 17th Century soldier, many a ghost has purportedly made a particular drinking den their haunting ground over the years.

Some patrons have felt the chill of an icy touch, only to find no hand there, while bar employees have even been sent home from their shift, unable to deal with the terrifying vision they saw.

Last Halloween we brought you the most haunted distilleries, so now click through the following pages to discover some of the world’s most haunted bars to get you nicely spooked out this year.

If you think we’ve missed a deserving spooky drinking den off this list, let us know by leaving a comment below. 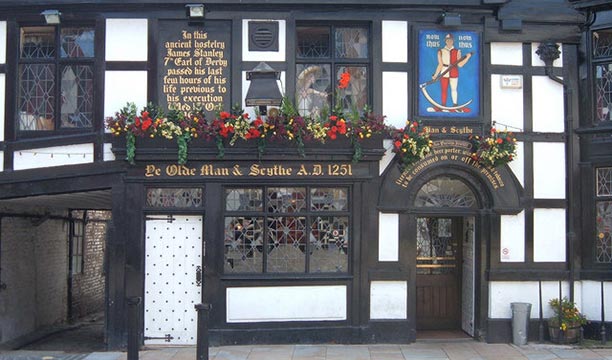 Bolton’s Ye Olde Man and Scythe – one of the oldest pubs in the UK dating back to 1251 – grabbed headlines on Valentine’s Day this year when a ghostly spectre was apparently captured on CCTV.

Landlord Tony Dooley discovered smashed glass on the floor when he came down on Friday morning but when he viewed the camera, he found it had stopped recording shortly after 6.18am.

He then saw what he believed to be the ghost of a man executed during the English Civil War in the 17th Century. The soldier, thought to be Royalist James Stanley, 7th Earl of Derby, supposedly spent the final year of his life staying at the pub before his gruesome execution.

He was beheaded in the square immediately in front of the pub and the chair he sat in while awaiting his fate is still inside. Hundreds more soldiers and civilians were also killed outside the pub during the Bolton Massacre in 1644. 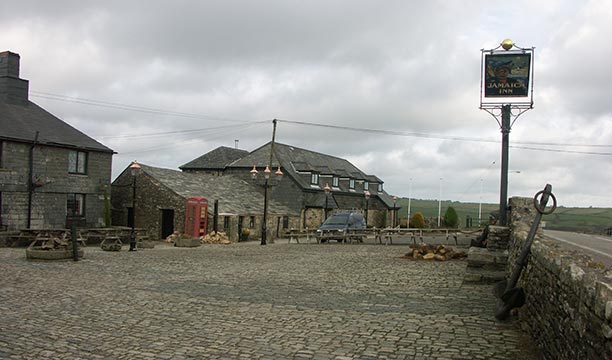 Jamaica Inn, based the UK’s idyllic Cornwall, featured on popular TV programme Most Haunted in 2010, with producers claiming it was “one of the spookiest episodes” they had ever created.

Owners of the Inn purported to have heard ghostly whispers in different languages and the clatter of horses hooves on the cobbled path outside – only to find none outside.

One ghost story in particular has become synonymous with the pub. Legend has it that many years ago a patron left his half-finished tankard on the bar and wondered into the night, never to be seen again. His body mysteriously discovered on a bleak moor, and past landlords have said the man’s ghost frequently wonders into the bar to finish his drink.

Though the Jamaica Inn is a real-life pub situated in the Cornish Bodin Moore area, it is also the namesake pub featured in Daphne Du Maurier’s eerie and suspenseful novel, Jamaica Inn. 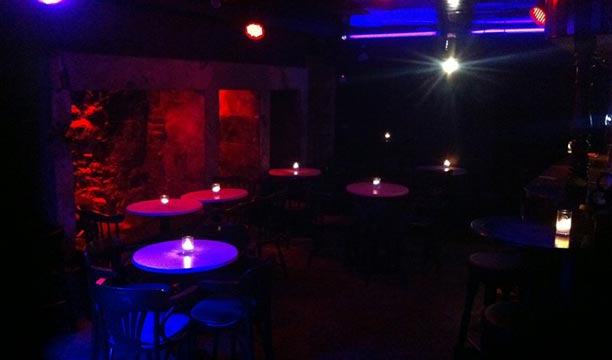 Said to be Edinburgh’s most haunted pub, The Banshee Labyrinth, formerly the Nicol Edwards Pub, is famed for its spooky occurrences.

The night club and bar is situated above the city’s infamous underground vaults, frequented by the city’s criminal underbelly and unsavoury characters where many people reportedly met a violent and grisly end.

One spirit many of the staff fear is that of “The Banshee”, a female spirit in Irish mythology which is an omen of death. When refurbishing the pub a few years ago, a group of workmen believed they all heard a terrifying scream. A few hours later, one of the workers received a phone call informing him that a family member had passed away. 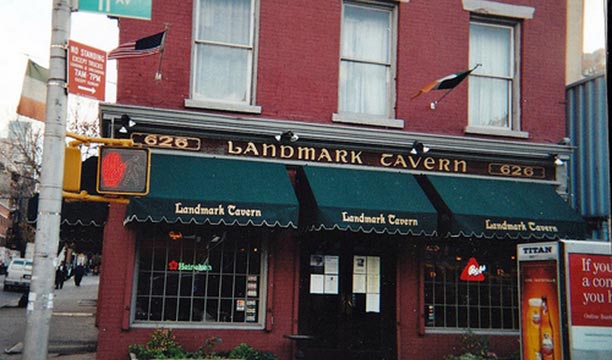 Opened in 1868, the Landmark Tavern is an Irish waterfront saloon based next to the Hudson River and is considered to be one of the oldest continually-operating bars in New York.

The establishment was transformed into an illicit speakeasy during Prohibition, with Hell’s Kitchen gangster George Raft one of its most loyal patrons. So loyal in fact his ghost is believed to frequent the establishment to this day.

The bar is also rumoured to be haunted by the ghostly apparition of a Confederate soldier who was shot in a bar brawl and died in an upstairs bathtub.

The ghost of an Irish immigrant girl who died in her bed has also been spotted wandering the third floor. 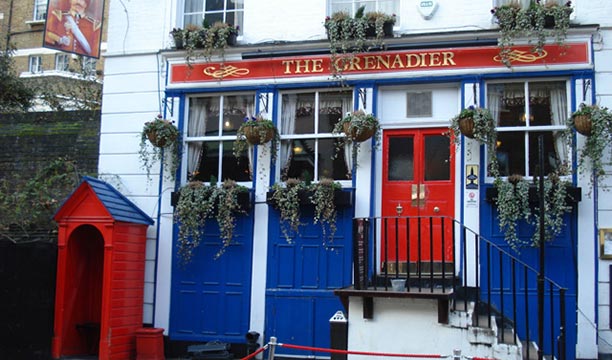 One of London’s most feared drinking dens, The Grenadier is said to be haunted by the ghost of a soldier who was beaten to death and thrown down a stairwell after he was found to be cheating at a game of cards.

It was originally built in 1720 as the officers’ mess for the senior infantry regiment of the British army, the 1st Regiment of Foot Guards, and so was located in a courtyard of their barracks.

Current owners claim the paranormal activity in the pub increases in September – the month in which the young soldier was murdered. 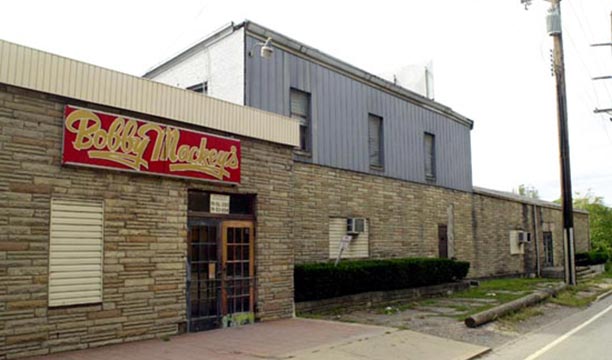 Bobby Mackey’s Nightclub has experienced a host of sinister events in its 150-year history, making it one of the most haunted drinking dens in the US.

The ghost of local girl Pearl Bryan, who in 1896 was beheaded by her boyfriend and his roommate in a nearby field after an abortion attempt went horribly wrong, is also purported to roam to bar.

In the 1950s a dance hall girl called Joanna, who worked at the venue, was made pregnant by a young singer. When she made her intentions known to marry the boy, her mobster father arranged to have him killed. Joanna then poisoned her father before taking her own life. Some patrons have claimed to see visions of all three. 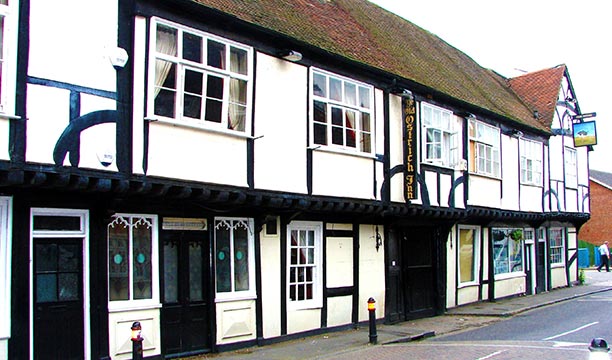 The Ostrich Inn, based in Berkshire, has witnessed a host of grisly murders over the years, a with a reported 60 committed at the establishment.

Most famous were those committed in the 17th Century by the landlord at the time, Mr Jarman, who with his wife made a profitable sideline by murdering wealthy guests after they had retired for the night.

With its foundations first laid in 1106, the Ostrich Inn claims to be the fourth oldest pub in the UK. It was frequented by highwaymen such as the infamous Dick Turpin, who is thought to have shot the pub’s housekeeper in the face before escaping out of a window. 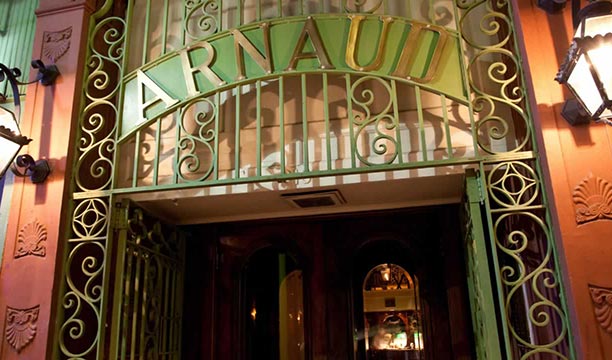 New Orleans-based bar and restaurant Arnaud’s has been known to house a ghost or two in its time. Waiters have been startled by gentleman dressed in a turn of the century tuxedo standing in the corner of the main dining room, smiling with a proprietary air.

The establishment therefore claims they believe this apparition is that of its original owner Count Arnaud, a French wine salesman who bought the space in 1918.

Another waiter claimed to see a woman wearing a hat leave the ladies room and stroll across the corridor to disappear through the wall. 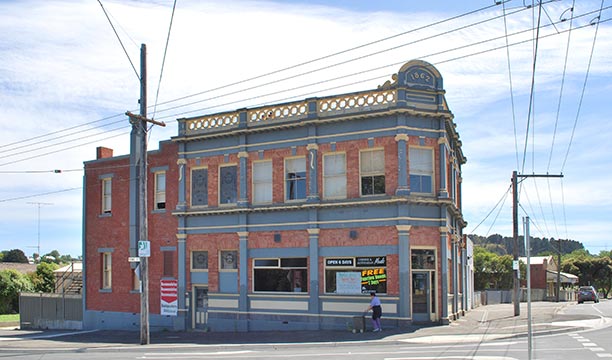 Said to be Australia’s most haunted haunted hotel and bar, the Eastern Station Hotel is thought to have seven spectres which regularly spook workers and guests.

The bar said the ghosts include a two-year-old boy who drowned in a gold rush mining puddle and original owner Thomas Redshaw Hunt, whose presence can be felt due to a mysteriously strong smell of tobacco.

Other ghosts include those of an English mother and her 12-year-old daughter who died after arriving at Ballarat of yellow fever, as well as that of an Irishman who was stabbed in the back by a love rival. 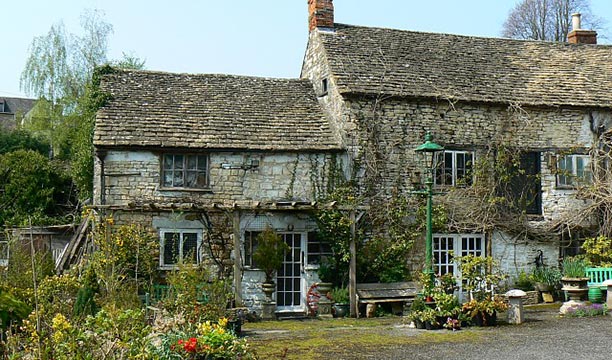 The 12th Century Ancient Ram Inn, in the village of Wotton-under-Edge, Gloucestershire, is believed to be plagued by up to 20 spectres who relentlessly torment punters and staff.

Built in 1145 on pagan burial ground, the Inn is believed to be the scene of child sacrifice and devil worship. The establishment is rumoured to be haunted by a male sex demon, known as an incubus, and a murdered young girl called Rosie.

Those brave enough to spend a night at the Inn have reported hearing the screams of a child, felt the cold touch of an invisible force and witnessed furniture forcefully flying across rooms.