While the spirits industry dedicates millions to extravagant advertising campaigns, some of these vintage ads have kept their iconic status throughout the 20th Century.

Other adverts in this list include Jameson ads from the turn of the century, communist imagery from Martini, and ideals of Scottish national identity from Dewar’s.

Click through the following pages to discover which we have selected as our top 10 vintage spirits adverts. 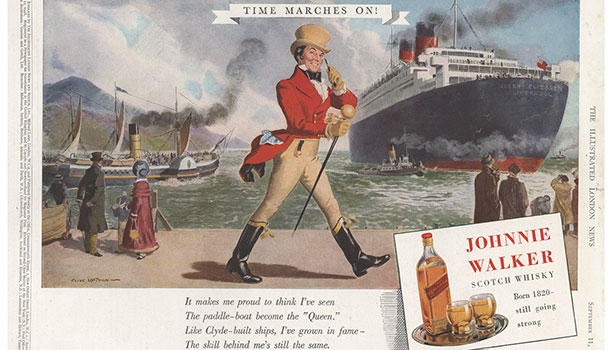 The world’s best-selling Scotch whisky brand Johnnie Walker first launched in 1857, despite its famous strapline of “Born 1820 – still going strong”, and has created an abundance of advertising campaigns throughout its extensive history. This print advert from 1948 encapsulates a strong post-war British mindset and features the brand’s iconic striding man, described by now-owner Diageo as “a remarkable symbol of intent”. 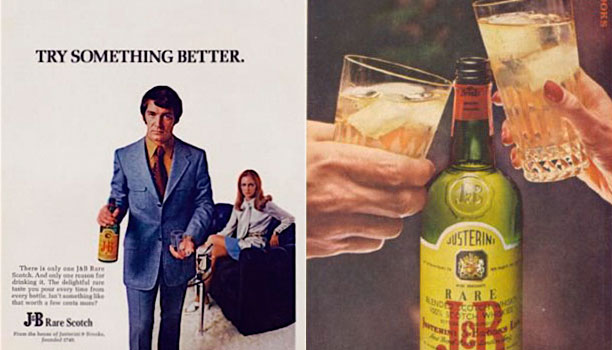 Described as “the world’s party whisky” J&B blended Scotch whisky has long marketed towards a demonstrably male consumer-base. The left mage from 1970 perfectly exemplifies the brand’s target buyer, as a confident man takes the foreground, while his female companion waits for her beverage patiently. 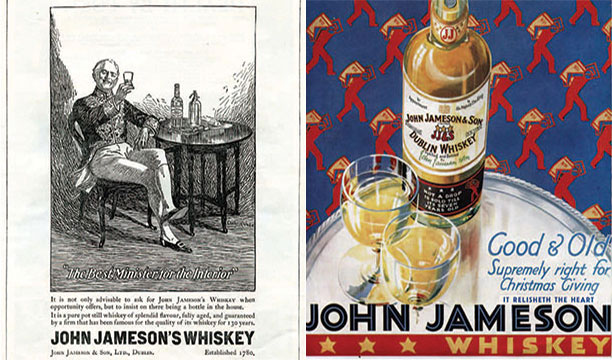 The world’s leading Irish whiskey brand Jameson formed its roots in 1780 when Scottish businessman John Jameson acquired Dublin’s Bow Street Distillery. Its history has long-been a central focus in the brand’s advertising campaigns, such as this 1911 wartime print advert on the right which features the tagline “The best minister for the interior”. The brand’s advertisement for the Christmas of 1931 shows a move towards colourful, kitsch, consumerist advertising. 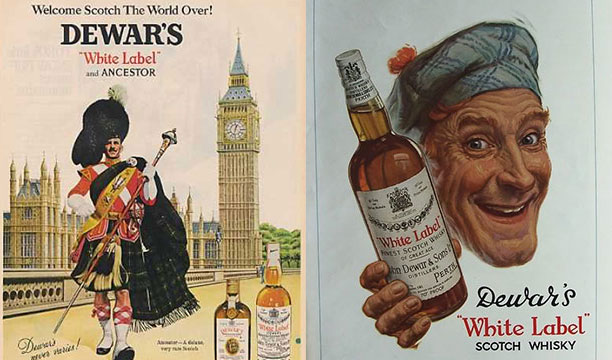 These adverts for Dewar’s blended Scotch whisky, now owned by Bacardi, show that the brand was keen to sell itself as a slice of Scottish national identity in the mid-Twentieth Century. In recent years, the brand has encountered advertising controversy with its television featuring Claire Forlani and her “poor” Scottish accent while the brand was also forced to pull one of its adverts following criticisms it was sexist. 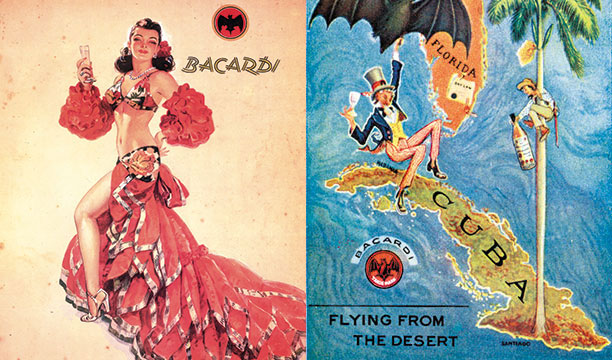 Bacardi, founded in 1862, has a fascinating advertising history, particularly during the Prohiobition era when Cuba was seen as a place of wild enjoyment when compared to the sober US landscape. While the brand began promoting its enduring invention – the Cuba Libre cocktail in 1900, American’s started flocking to the island at the start of Prohibition in 1919. 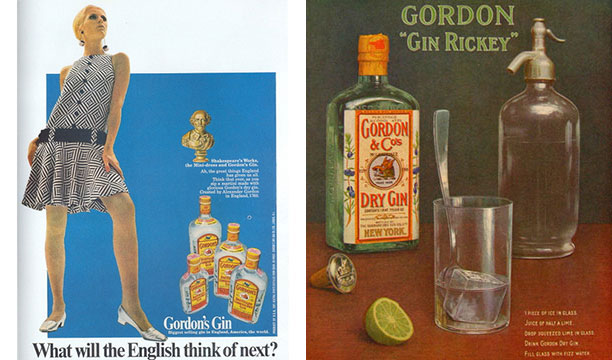 Gordon’s gin, now owned by UK drinks giant Diageo, has played on its British roots and role in cocktail culture throughout the 20th Century. The advert on the left aligns the brand with the fashion conscious cocktail and G&T sippers in the swinging 60s, while the second advert promotes Gordon’s as an essential ingredient in the Gin Rickey. 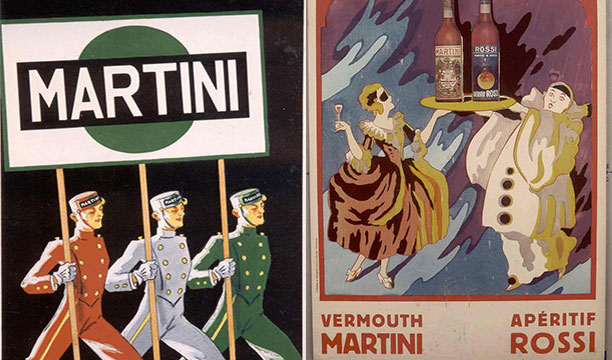 First launched in 1863, Martini vermouth has undergone an extensive process of brand reinvention throughout the years. The image on the left emphasises its Italian origins through a communist-like image, while the advert of the right gives a more elegant and sophisticated image of the brand as an essential aperitif. 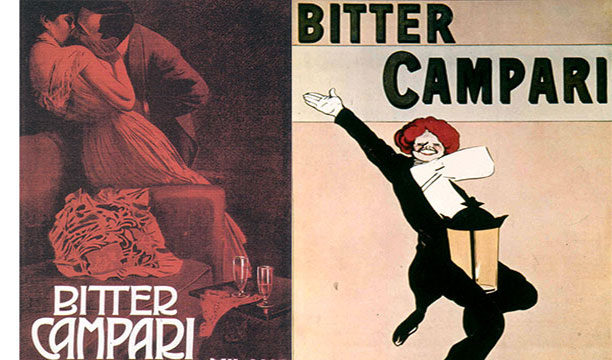 Another Italian aperitif, Campari’s advertising campaigns have undergone massive change over the years. The image of the right is from 1909 and exemplifies a fun-loving, cartoon advert typical of the era, while the image on the left, from 1920, is a risqué advertisement which conveys a more grown up image for the brand. 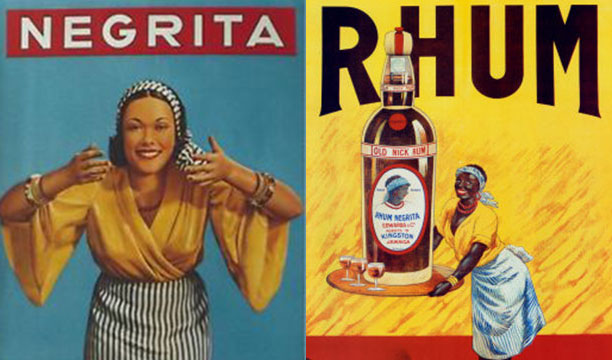 A feminine figure – a symbol of the Caribbean – continues to adorn the advertising posters for Negrita rum, though in a decidedly sexed-up form. These vintage advertisements for the brand communicates its provenance and “good time” credentials. 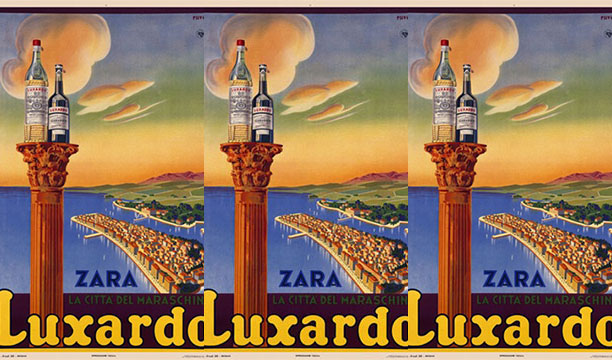 The founding company of Luxardo liqueur was first established in 1821 and has released a range of advertising materials to support its products throughout the past 190 years. This bright art deco picture is a particular favourite.