Distillery bars offer curious consumers the chance to witness the spirits creation process from grain to glass – here are 10 of the world’s best.

While many bar-goers might not give a second thought to how the main ingredient in their cocktail is created, there are a number of distillery bars out there which shed a light on this fascinating process.

These bars give consumers the chance to sample artisan spirits created only a matter of feet away, offering a unique opportunity to expand their knowledge while sampling a delicious dram or cocktail.

Our list includes the first distillery to open in London’s Square Mile in more than 200 years, as well as a ski-in distillery saloon and a distiller/bar situated in a historic corset factory.

Click through the following pages to discover which we have selected as the world’s top 10 distillery bars. If you think we’ve missed an obvious choice, let us know by leaving a comment below. 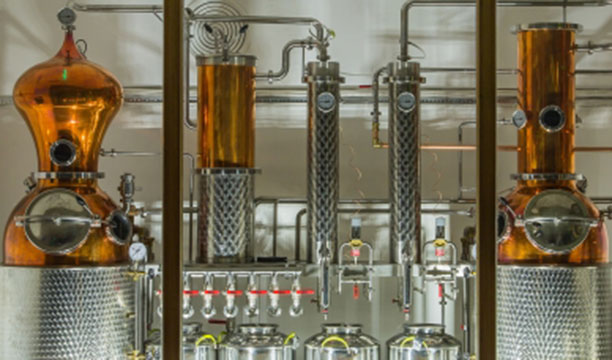 The City of London Distillery is the first working distillery to operate within the city’s historic square mile in more than 200 years.

Initially opened as a cocktail bar, owner Jonathan Clark decided to implement two stills – named Jennifer & Clarissa – into his venue, setting them behind a floor to ceiling plate glass

The bar now produces and serves its own namesake small-batch gin, provides distillery tours, offers more than 300 other brands of gin behind its bar, and even gives visitors the opportunity to distill and bottle their own personalised gin.

With capacity to produce just 300 bottles of gin a day, City of London Gin and its parent distillery embody the artisan gin renaissance trend taking the UK by storm. 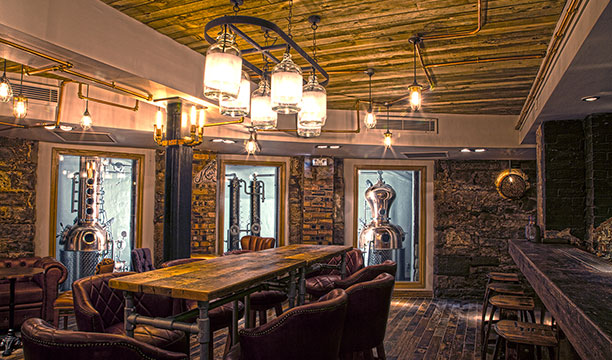 Recently launched Edinburgh Gin set up a distillery inside the Heads and Tales gin emporium, situated below The Rutland Hotel in Edinburgh, earlier this year.

Drinks consultant and bar manager Bruce Hamilton runs Heads and Tales, which offers visitors a selection of beers, wines and spirits, plus a cocktail list full of unique and original creations at the bar, and can accommodate for up to 70 people. 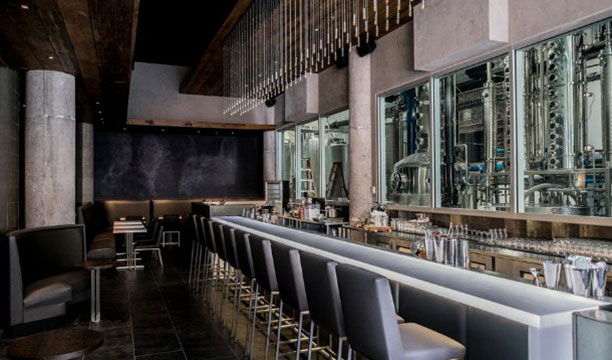 The owners of Ch Distillery did the reverse to London’s COLD and opened up a bar inside their already established distillery.

Opened by distiller Tim Atkinson in 2012 with the goal of becoming Chicago’s premiere grain-to-bottle vodka distillery, the bar/distillery has become a firm favourite among Chicago locals and tourists.

While the distillery initially focussed on vodka production, it now creates gin, amaro, rum, limoncello, and whiskey which has yet to finish ageing. 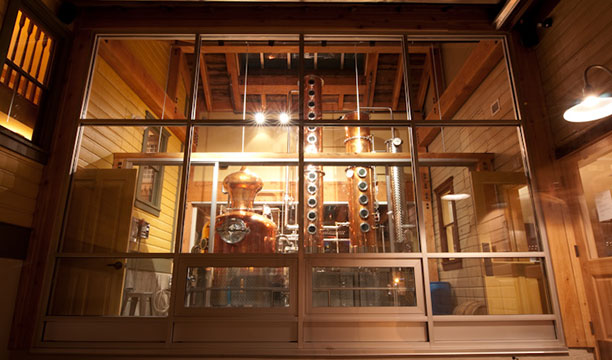 Based in the snowy US state of Utah, the High West Distillery and Saloon is said to be the world’s first ski-in distillery and gastro-saloon.

Located at exactly 7000 feet in the Wasatch Range of the Rocky Mountains in Old Town Park City, Utah, the building is also Utah’s first small-batch distillery since the 1870s. 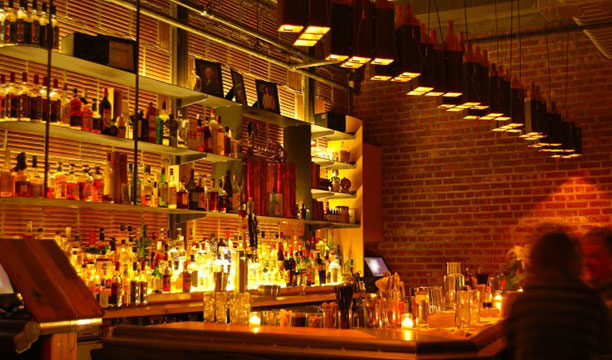 New York has one of the most diverse bar scenes in the world, but its The Shanty distillery bar stands out from the crowd through its sheer proximity to the creation of the spirits it serves.

Part of the New York Distilling Company, The Shanty offers a full complement of cocktails, featuring not only its own distilled spirits, but also from around the world.

Spirits produced by the distillery include an American Gin, Netherland Gin, Navy Strength Gin and a rye which is currently ageing. 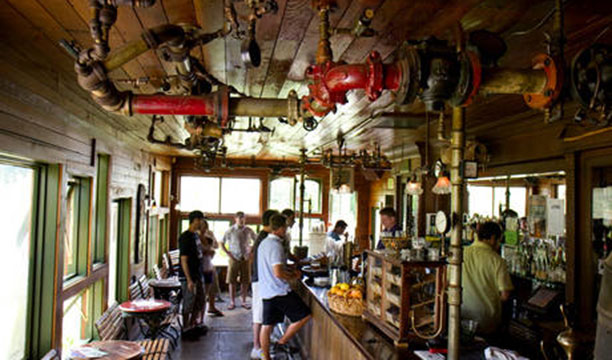 Housed under the same roof as its namesake distillery in what used to be old a old potato shed, The Edgefield Distillery Bar offers relief to thirsty distillery tourists.

With antique windows, a handsome back bar, intriguing pipe sculptures and a cozy woodstove, the Distillery Bar is a favourite gathering spot at Edgefield, Oregan.

Visitors to the bar can take a look at the 12-foot high gleaming copper and stainless steel still situated behind a wall of glass. 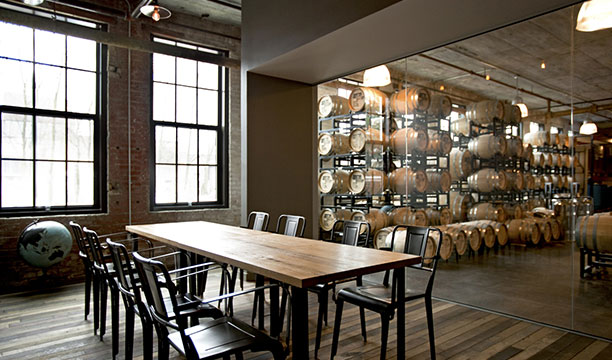 The ornate concrete bar at the Journeyman Distillery has become almost as well-known as the distillery itself.

The distillery produces grain to bottle (or grain to glass) spirits within a historic building which used to manufacture corsets and buggies, even milling the grain by hand on-site.

Sophisticated cocktails are made in the bar using whisky, gin and rum house spirits. Guests can view the distilling and ageing process behind a panel of glass. 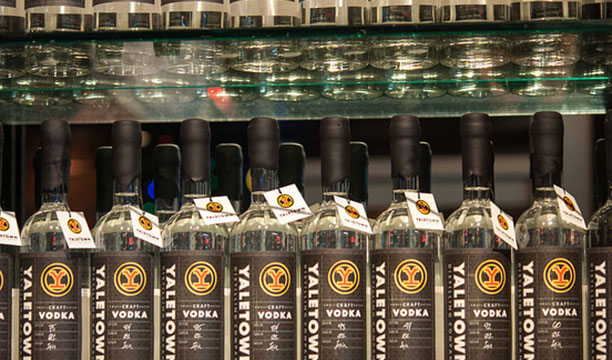 Opened in 2013 by the Mark James Group, the company behind Yaletown Brewing Company, the Yaletown Distilling Company features its own late night distillery bar and restaurant.

Serving an array of classic and creative cocktails made with YDC spirits, The Distillery Bar also doubles as a trendy restaurant specialising in breakfast and Italian food. 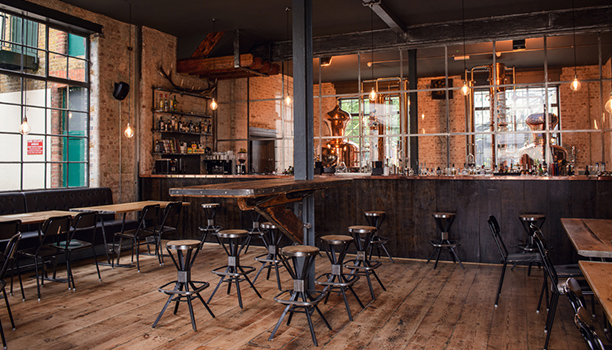 Situated in the heart of what was once London’s old spirits industry, craft distillery the East London Liquor Company (ELLC) has brought spirits production back to London’s East End after more than 100 years.

Not only does ELLC produce its own London Dry Gin, Demerara Rum and Small Batch Grain Vodka, it is also injecting a much-needed dose of cocktail culture into Mile End.

The bar area is spacious with minimalist décor and those choosing to pull up a bar stool will not miss the two giant copper stills towering behind the bar.

The cocktail menu offers a list of bespoke creations, including but not limited to ELLC’s own spirits range, but instead showcasing the “rich heritage” of gin production around the world. 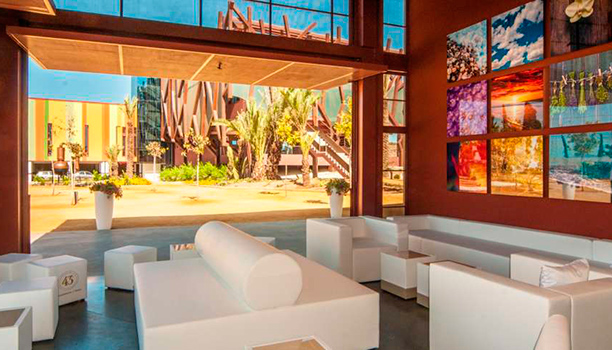 Amidst the dusty outskirts of Cartagena in Spain sits Spanish liqueur Licor 43’s only distillery.

It’s striking exterior has been designed to emulate the brand’s values, but once the tour of the distillery, processing plant and new Experiencia 43 interactive museum is over it’s the cocktail corner you want to make a beeline for.

Bright and airy, the bar opens out onto the distillery courtyard providing a cool, calm environment for guests to unwind while sipping original Licor 43 serves such as the Café 43, made from Licor 43 and espresso coffee over ice.