The whiskeys that made Breaking Bad

Breaking Bad may be coming to an end but the legacy left for some of the whiskey brands featured in the hit show are expected to live on.

AMC’s award-winning show, which draws to a close this Sunday 29 September, has featured several well-known whiskey brands during its five seasons.

As fans followed the journey of Walter White’s descent from revered high school teacher to feared drug baron, they may have noticed a handful of whiskeys and other spirit brands crop up along the way as the characters’ favourite drinks.

Product placement is rife in American dramas, especially from spirit brands making an appearance in trendy hit shows such as True Blood, Dexter and The Sopranos.

But whiskey in particular, and a certain fictional brand of Tequila, have been integral to the storyline of Breaking Bad.

Click through the following pages to see which ones they are. Beware, there are spoilers! 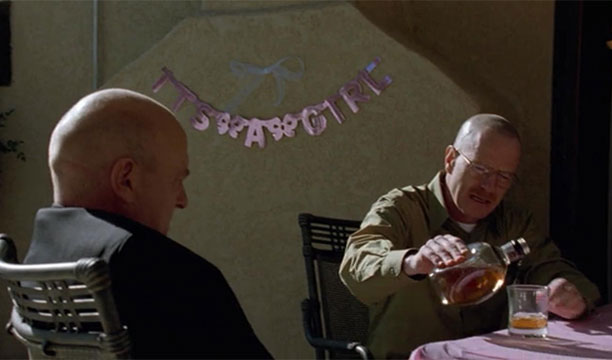 A relatively unknown blended Scotch whisky outside the US but the go-to drink for Breaking Bad’s antihero Walt. Identifiable by its “pinched” triangular bottle shape, Dimple Pinch is seen on several occasions, but only at pivotal moments in the show’s storyline.

Walt first reaches for Dimple Pinch in the season one finale, at the baby shower of his second child Holly when he celebrates her birth with brother-in-law and DEA agent Hank Schrader. The second occasion White pours himself a glass to steady his nerves after taking out his enemy Gus Fring.

The last occasion, as seen in Sunday night’s penultimate episode of the show, Walt orders a dram at a remote bar in New Hampshire as a final treat before giving himself up to the authorities. However a change of heart sees him abandon the drink and the bar.

Owned by Scotch distillers Haig, Dimple Pinch is only available in the US, or through select specialist retailers in other markets. In the UK the liquid is better known as Haig’s Dimple. 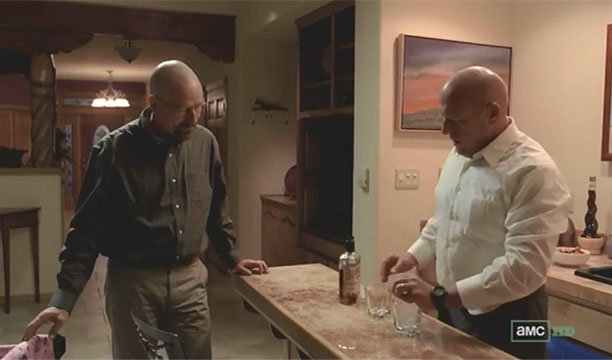 Hank Schrader, the all-American DEA agent loves his Bourbon. Knob Creek, the Bourbon produced by Beam Inc, is one of his go-to brands and features most prominently in the episode titled Madrigal, when Hank pours a glass for himself and Walt from his home bar. In this episode Hank pours the drink neat for himself, and on the rocks for Walt – his preferred serve.

An interesting point to note is the way Walt’s preferred way of taking whisky changes after he kills Mike Ehrmantraut, a more experienced character in the drug underworld, who drinks his whisky on the rocks. Producer Vince Gilligan felt it apt that Walt adopts personality traits of those he admires but kills throughout the show. But by the penultimate episode, Walt has “come of age” and orders his “Dimple Pinch, neat”, suggesting he has finally found himself.

On a side note, Beam has recently launched a Knob Creek Smoked Maple Bourbon, the brand’s first flavoured variation. 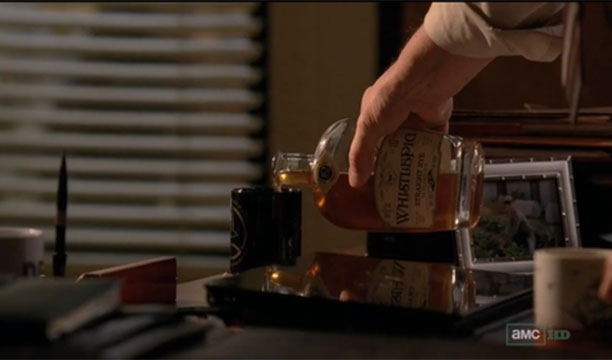 Show producer Vince Gilligan is a professed fan of straight rye whiskey brand WhistlePig, a Vermont, New England brand founded by Raj Bhakta, former contestant on the US series of The Apprentice.

Launched in 2010, WhistlePig quickly gained a reputation amongst rye lovers, one of whom happened to be Gilligan. While several product placements are known to have appeared in Breaking Bad, Bhakta did not pay to have his brand features, but certainly reaped the benefits of the rye appearing in the show. According to the brand, web traffic and interest increased the day after WhistlePig first appeared in the show.

In the episode titled Madrigal in season five, Hank Schrader and his two fellow agents Geore Merkert and Steven Gomez drink WhistlePig from mugs at the office as they discuss a failure to bring down Gus Fring. 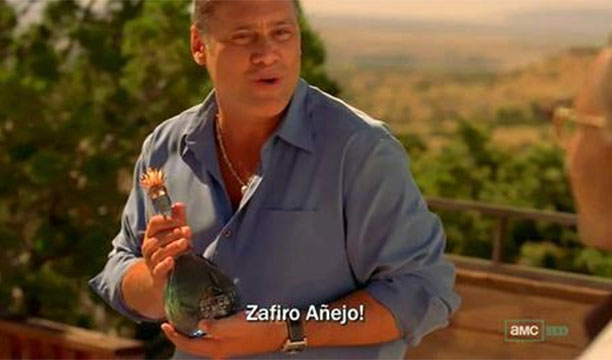 We know it’s not a whisky but this particular Tequila played an integral role in season five of Breaking Bad, notably in the episode titled Salud Gus Fring, along with Jesse Pinkman and Mike Ehrmantraut, brings the fictional bottle of Zafiro Anejo to the house of Mexican cartel boss Don Eladio Vuente, laced with poison. The entire cartel, including Fring, drink from the bottle with devastating effect, leaving just Mike and Jesse unharmed. Fring, who immediately vomited the poison back up, lived to tell the tale.

Show producer Vince Gilligan admitted that he had hoped to secure product placement for the episode, but was unable to convince a brand to feature – none wanted to be associated with bringing about a massacre.