In 1991, fearing litigation and in order not to encourage people to put their health at risk, the Guinness Book of World Records removed all ‘feats’ relating to alcohol consumption.

With more and more people vying to beat ridiculous records such as “Highest Documented Blood Alcohol Level” and “Youngest Death from Alcohol Poisoning” – both of which appeared in the 1979 edition of the book – it’s not difficult to see why.

Another outrageous record previously included was “Most Alcoholic Person,” held by a man named Vanhorn (1850 – 1911), who drank four bottles of Ruby Port every day for 23 years (a staggering total of 35,688 bottles in his life). These records have, understandably, since been removed.

But don’t fret. The Guinness Book of World Records is still crammed full of feats involving spirits. From records set by barmen for the most cocktails created in a specific time-period to the world’s largest spirit tasting event and the most prolific mice-killing machines, these records are a mixture of impressive and amusing.

Here’s a countdown of our top 10 favourites.

10. The World’s Most Expensive Whisky 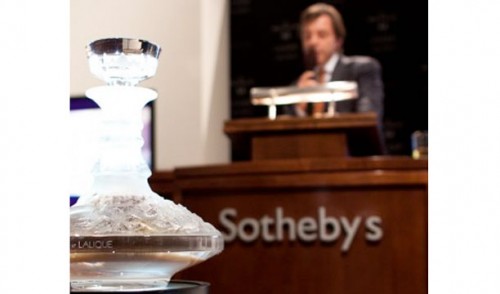 In 2010, a 64-year-old bottle of The Macallan (in Lalique) sold at auction in New York for a whooping US$460,000 (£291,125), becoming the most expensive whisky to ever go under the hammer. Presented in a magnificent crystal decanter, the bottle is the oldest and rarest whisky released in the history of the distillery. Created as the result of a collaborative project between The Macallan and Lalique, the whiskey was sold to raise money for the charity ‘Water’ – aiding those living in developing nations to access safe drinking water. The money raised was enough to provide clean water for 23,000 people. 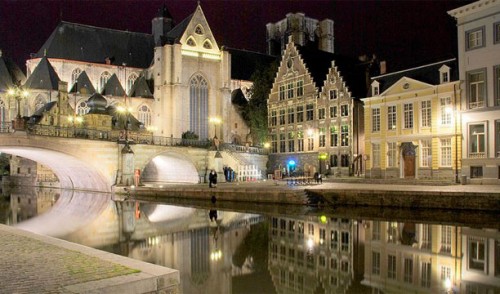 Whisky Unlimited’s record-breaking spirit-tasting event was held in 2009 in the picturesque Belgian city of Ghent. Among the whiskies distributed to the public for tasting were: Johnnie Walker Black Label (aged 12 years), Talisker (10 years), The Singleton (12 years), Cragganmore (12 years) Bushmills original and Dalwhinnie (15 years). In total, 2,252 participants took part in the proceedings, smashing the world record while tasting some of the world’s best whiskies in the process. 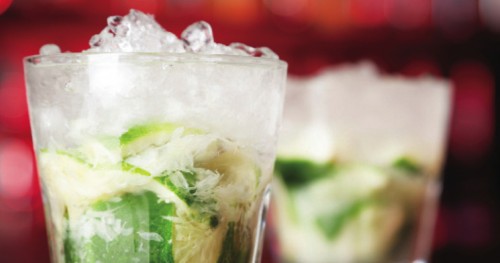 A Brazilian Cachaça enthusiast named Messias Soares Cavalcante has collected 12,800 bottles of the spirit. Made from fermented sugar-cane juice and sometimes referred to as the ‘cousin of rum,’ Cachaça is Brazil’s national spirit and is the key ingredient in the national drink, Caipirinha. The collector has compiled his collection of rare and publicly available blends since 1988, resulting in the world’s most extensive collection of its kind.

7. The Most Consecutive Bottle Bumps on a Forearm 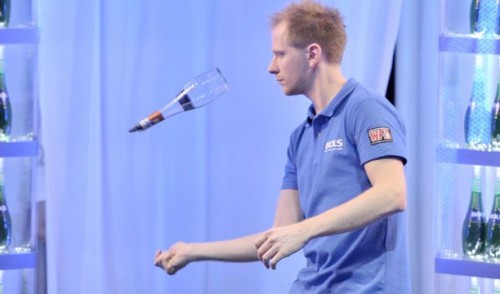 One could debate whether this is a spirit related record or more a celebration of eye-arm co-ordination. Either way, Polish-native Maciej Szymanski beat the record when he managed 39 consecutive bottle bumps on his forearm at the Warsaw Flair Challenge, 2011.

6. The World’s Most Expensive Cocktail 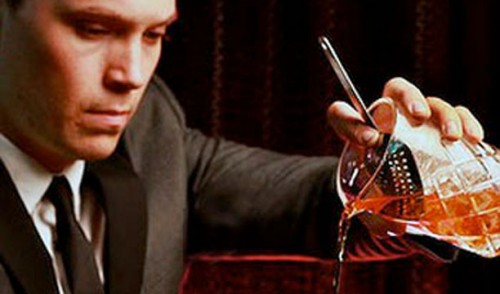 This record is broken with incredible regularity as bars go to increasingly extreme lengths in order to hold the honour. The latest champion, called “Winston,” cost £8,167 and was created and sold at Club 23 in Melbourne, owned by Shane Warne, Australian former cricket star and husband of Elizabeth Hurley. Winston’s ingredients include Grande Marnier Quintessence, Chartreuse Vieillissement Exceptionnellement Prolonge and 1858 Croizet cognac, worth £99,000 per bottle. The record was beaten just five months after Salvatore Calabrese created the £5,500 a glass “Salvatore’s Legacy.

5. Most Cocktails Mixed in One Hour 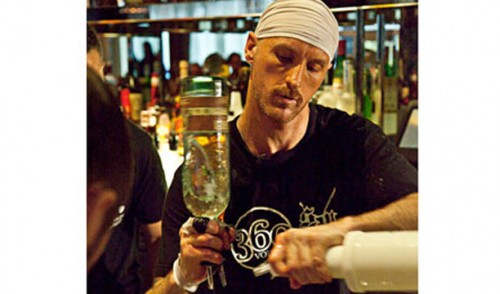 New York cocktail mixer Sheldon Wiley shook up and poured out a staggering 1,003 different cocktails in the space of 60 minutes in The Empire Room of the Empire State Building in 2011. According to the record rules, each cocktail must contain more than three different ingredients to be officially classed as a cocktail by the judges. For his feat, Wiley used four ingredients in every drink: a fresh fruit juice, several flavoured syrups and vodka.

This record has since been broken by Erik Mora of the Spearmint Rhino in Las Vegas, who poured 1,559 cocktails in one hour.

4. Most Cocktails Shaken at the Same Time 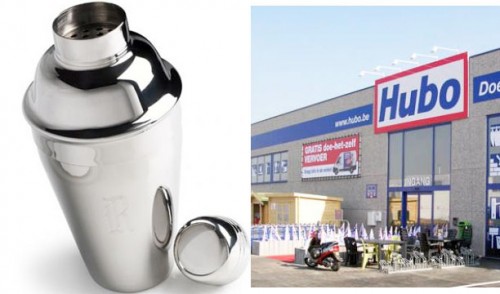 This rather obtuse record was set by 970 cocktail-lovers in Brussels, Belgium, 2009, who all simultaneously shook their cocktails at a Brussels event organised by HUBO, a Belgian hardware chain, in celebration of the opening of its 100th store. 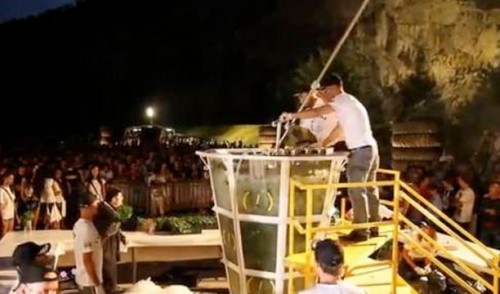 Containing a total volume of 2,100 litres, this cocktail was made by Massimo Masini and Alessandro Selvaggi in Italy, 2012. By the time it was finished, the mammoth mojito contained 300 litres of rum, 120kg of brown sugar, 25kg of mint, 240kg of lime, 1,200kg of ice and 600 litres of sparkling water. As soon as the contents in the glass were measured and the record confirmed, the party started and the cocktail was downed by a gathering crowd eager to drink a piece of history.

2. The World’s Most Expensive Cognac 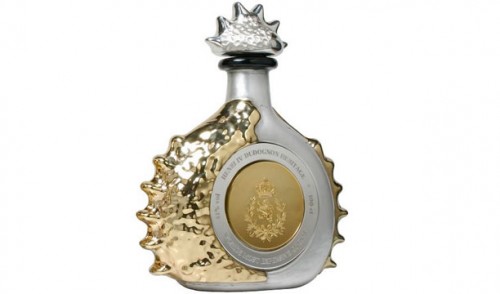 How much would you pay for a bottle of Cognac? £200? £100,000? How about £1,000,000? Yes you read that right. £1m. Henri IV Cognac Grande Champagne has been aged for 100 years and the bottle dipped in 24k gold, platinum and then adorned with 6,500 diamonds. The press release from Henri VI does its best to justify the price tag: “The one and only Cognac bottle in the world valued at £1m has been called the ‘The DNA of Cognac,’ the essence of the water of life.” 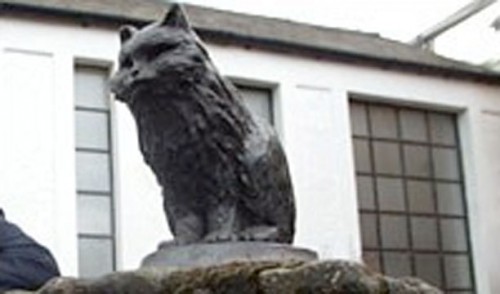 Our favourite and probably the most practical of all the record holders in this list is the distillery mouser to end all distillery mousers. Named Towser the Mouser, the female tortoiseshell rodent-killing machine struck fear into the hearts of mice in the Glenturrat Distillery, UK, during her 24-year reign as resident pest control expert from 1963-1987. She managed to catch an estimated 28,899 mice that were eager to eat the grain in the barley store.

A statue of the feared feline now stands outside the grounds of Glenturret – in case any mice dare to show their face there again. In her honour, a paw print is now printed on every bottle of the company’s Highland Liquor product.