SB Picks: US Presidents and their whiskey

With the American presidential election just hours away, we take a look back at how US presidents have helped shaped the whiskey and bourbon industry through the years.

Whiskey has been an important part of American life for hundreds of years, so much so that the country’s first president built his own wheat farm and distillery.

Even through to America’s most recent president, Barack Obama, who has been known to love whiskey so much his Ambassador for Australia has promised to ship some Tasmanian whisky over for him.

The outcome of Tuesday’s (6 November) presidential election however may alter the fate of whiskey in the White House – challenger and Republican Mitt Romney is a devout Mormon and abstains from drinking alcohol. 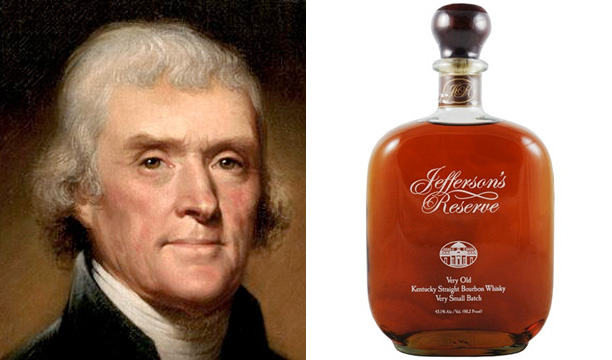 The founding father and first to sign the American Declaration of Independence is so revered he has a whole line of whiskies named in his honour.

Small batch bourbon producer Jefferson – the smallest family-owned distillery in Kentucky – named its bourbons after “the ultimate Renaissance men, Thomas Jefferson and Sam Houston” who “stand for boldness, integrity and character – just like our whisky”. Jefferson produces a range of whiskies named after the former President, including Jefferson’s Reserve, Jefferson’s Presidential Select and Jefferson’s Straight Rye Whiskey, made from 100% rye. 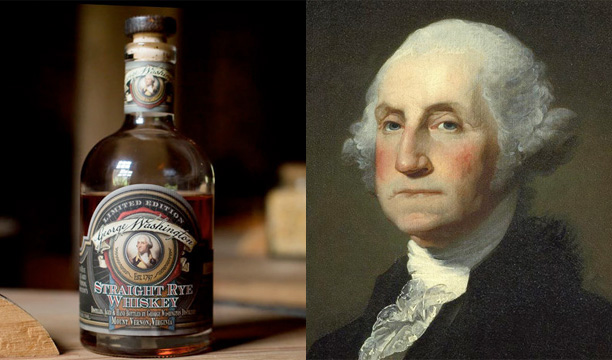 The first President of the United States is well-known for being something of a whisky lover. He built and ran his own whiskey distillery at Mount Vernon, Virginia, which is still in operation today for just seven months of the year. It produces George Washington Whiskey in two styles – a wheat-based whiskey similar to the kind Washington himself sold in both aged and three-year-old versions, and a rye whiskey, which in homage to the late President’s original recipe, contains 60% rye and is bottled straight from the stills.

Both whiskies are only sold through Mount Vernon’s gift shops a month or so after production finishes. It’s reported that buyers line up outside the distillery doors in the early hours to get their hands on a bottle, an aged 375ml bottle of which can go for $180. A new distillery in Washington state, Heritage Distilling Company, is gearing up to start producing its own George Washington Rye – a variation of the President’s original recipe. 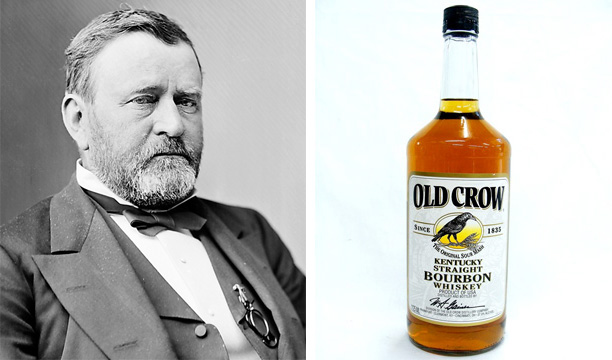 The 18th American President, who was in office from 1896-1877, was said to have a firm love for low-priced Kentucky bourbon brand Old Crow. The President and general was said to have been a big drinker, and is alleged to have received more than his fair share of bourbon rationed out to regiments during the Civil War. Distilled by Beam, the bourbon is one of the most historic still produced today, and was also favoured by fellow presidents Andrew Jackson and William Henry Harrison. 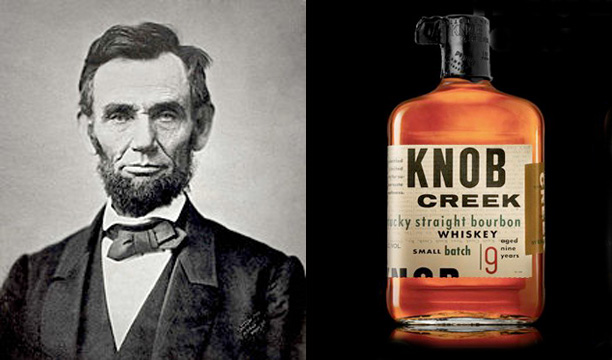 Knob Creek bourbon, also produced by Beam, is named after the boyhood home of Abraham Lincoln, the 16th US President that led his country through the American Civil War. However it’s rumoured that Lincoln’s favourite whiskey was in fact Old Overholt, a straight rye whiskey aged for four years and thought to be first distilled in 1810. Old Overholt is also owned by Beam. 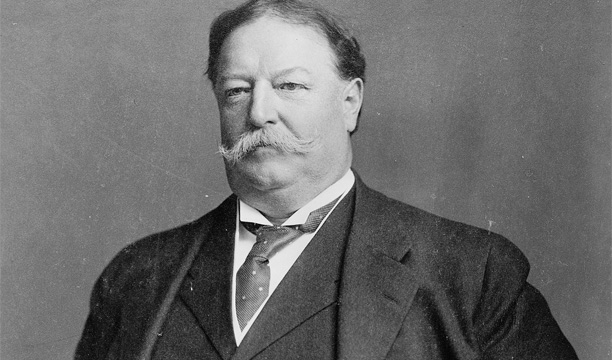 This overweight president, who held office from 1909-1913, was responsible for shaping what we term whiskey as today. In 1909 President Taft issued a set of guidelines for determining what could be called a straight whiskey, blended whiskey and imitation whiskey in the US for the first time. His decision has been developed over the years to include regulations for bourbon. 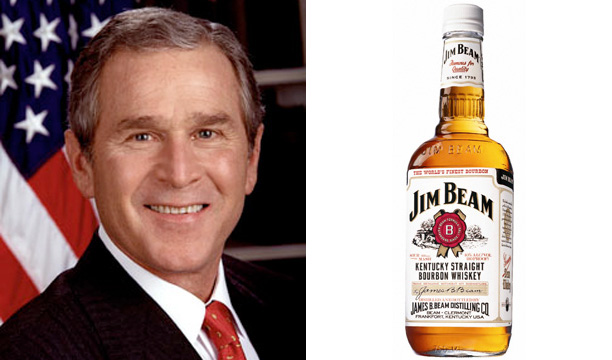 Before becoming President of the US in 2001, George W Bush would drink somewhat heavily, his tipple of choice being Jim Beam. It has been famously reported that his wife Laura Bush gave him an ultimatum, saying: “It’s Jim Beam or Me”, although the former First Lady has since refuted the rumour. George W. Bush, she claims, gave up drinking after a “wild, drunken weekend” to celebrate his 40th birthday.

Apparently he went teetotal, kicking Jim Beam to the sidelines. Fifteen years later he followed his father’s footsteps and became the 43rd US President.

The most recent President is apparently such a big fan of whiskey that his US Ambassador to Australia Jeffrey Bleich is keen to get Barack Obama hooked on Tasmanian whisky. After a visit to Hobart recently, the ambassador discussed his plans to introduce the Australian produce to the President. “He likes a whisky,” Bleich claimed. “I’ve already promised I’m going to bring back some Tasmanian whisky with me”. 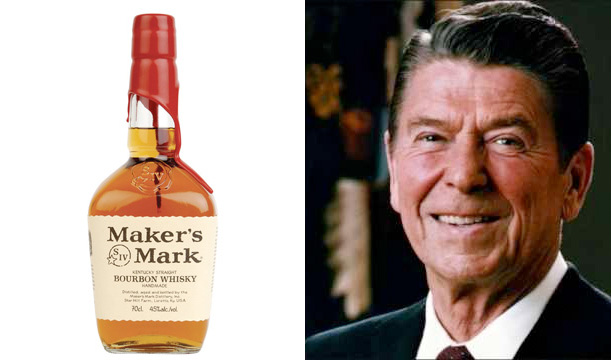 Maker’s Mark was famously the whiskey of choice for 40th President Ronald Reagan. Reportedly, when Reagan debated Walter Mondale for the 1984 election, he requested a bottle of Maker’s Mark be left on his hotel room pillow. The distillery even commissioned a few cases of a special commemorative bottle, released when Reagan won the presidency in 1981. 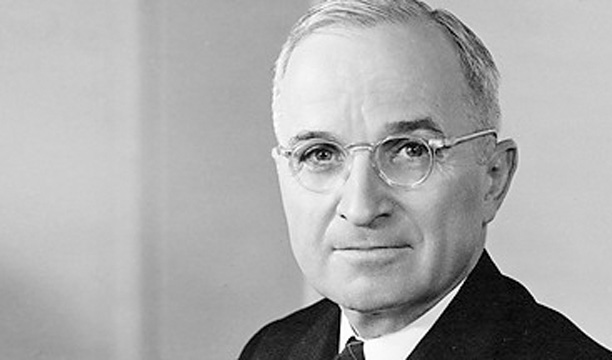 Harry S. Truman, 33rd President of the United States who saw the country through the final months of World War II, was rumoured to have a novel solution for maintaining his health. In addition to a balanced diet and daily walks, Truman swore by an ounce of bourbon every morning following his regular exercise. He must have done something right – Truman lived to the ripe old age of 88. 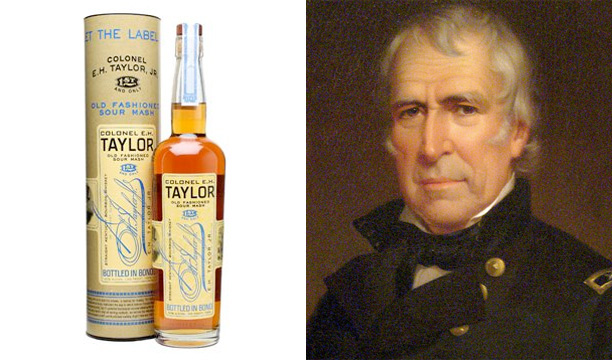 Zachary Taylor was the 12th President of the United States back in 1849. He held office for only a year, and while he himself was not a president who contributed first hand to the growth of the American whiskey industry, his great nephew, Edmund Haynes Taylor did.

E.H.Taylor Jr was undisputedly one of the ‘fathers of the modern bourbon industry’, having run several distilleries in his time, including the O.F.C and Carlisle distilleries that became today’s Buffalo Trace Distillery. Taylor worked alongside President William Taft to help write the legal definition of American whiskey.