Scotch whisky exports grew by 12% in the past year, driven by demand from emerging markets such as Venezuala, Latvia and Estonia.

According to the latest data released by the Scotch Whisky Association (SWA), Scotch whisky exports grew from £3.8bn to £4.2bn in the year to June 2012, as young, affluent consumers in emerging markets become drawn into the category.

During the first half of 2012, emerging markets in Asia, South America and Eastern Europe delivered tremendous growth.

Exports to Taiwan rose 14% to £80m, making it the fourth largest Scotch whisky market in the world, while relative neighbour and occupier of the third top spot Singapore recorded a decline of -1.5%, dropping to £146.2m.

Sales to Eastern European countries like Estonia and Latvia, the entry points to Russia, also grew phenomenally, up 77% and 35% respectively.

Gavin Hewitt, chief executive of the Scotch Whisky Association, said: “Over the past year the value of Scotch Whisky exports has continued to increase.

“Recent announcements of investments in new distilleries and the expansion of existing facilities demonstrate the level of confidence producers have in future growth opportunities.”

As the biggest market for Scotch, the US continued to report strong figures, although tough times in the Eurozone continued to impact sales to Germany, Spain and France, with the latter two reporting a double-digit decline. 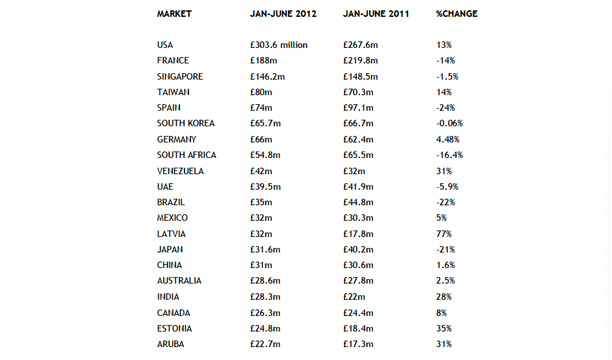