Best pubs and bars to enjoy the London Olympics

In the last few days before London is descended upon by the rest of the world and his dog, Londoners are girding their loins (and throwing away their Oyster card) in preparation for the London Olympics.

Also preparing in earnest are the numerous pubs, bars and restaurants that are using the London Olympics as a golden opportunity to make this a summer to remember for their own flock while others from across the world looking to enjoy London in style.

While some have named a flaming cocktail in the Games’ honour, others have created an inspired afternoon tea. One bar is even hosting a series of mini West End shows in its basement as a tribute to London.

Here’s a selection of some of the best London Olympic themed food and drink happenings to keep you Ahead of the Games. 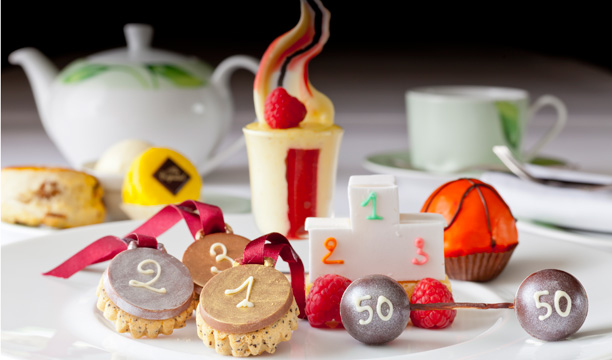 Afternoon Tea at The Capital Hotel
This fabulously located five-star hotel, nestled in the quiet roads just behind Harrods, will be celebrating the Games in the way they can best – through an award winning London Olympics-themed afternoon tea. The hotel was awarded the UK Tea Guild’s Award of Excellence for Top London Afternoon Tea 2012, and will be treating those weary after thoroughly exploring the numerous floors of London’s best known department store to afternoon tea served between 2.30pm and 5.30pm.

The highlights of the themed tea are dumbbells made with passionfruit ganache in a Valhrona chocolate shell; a winners’ podium made from glazed lemon sponge; Valhrona chocolate buttons on poppy seed and ginger sable biscuit sporting medals; a flame made from banana cream rippled through with a raspberry coulis and white chocolate flame decoration; and lastly a glazed basketball carrot cake, all of which are served alongside delicate sandwiches, home-made scones served with clotted cream and The Capital’s home-made jam. 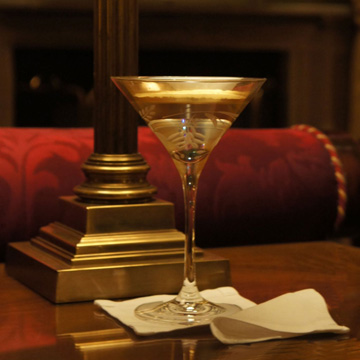 In the Library bar of this exclusive hotel next to Hyde Park Corner, Games (and Martini) enthusiasts can order their own Gold Medal Martini cocktail, which comes complete with gold powder dusting on the top. While you may not actually take part in any of the events, the gold shimmer on your lips after drinking the cocktail is almost as good as owning your own medal (almost), and yours for £25. No training required. The vodka and gin used are Jewel of Russia and Tanqueray respectively. 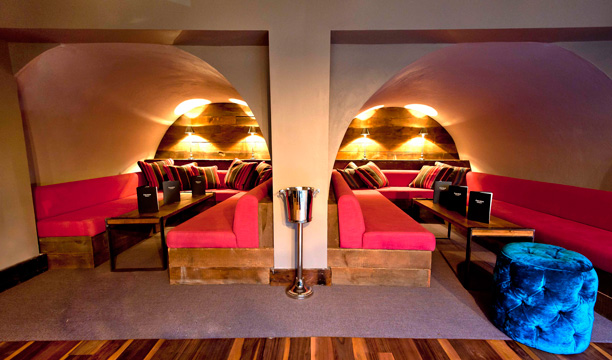 This trendy Soho bar will be celebrating the London Olympic Games in a variety of ways. Specially created Olympic cocktails will set the international tone, and to hark back to the host city, punters will be treated to nightly performances of some of the West End’s most well loved musicals. The downstairs bar will be transformed into a pop-up theatre, recreating well known shows such as Jersey Boys and Priscilla Queen of the Desert, all of which are performed by stars accompanied by Archer Street’s all-singing, all-dancing bar staff.

The cocktails have suitably Olympic names, such as the Bulls-eye (Miller’s gin built over crushed ice with raspberry liqueur, rose syrup and fresh lemon juice topped up with ginger ale) or the Flaming Arrow (Ketel One vodka and lychee liqueur shaken with fresh mint and cucumber, apple juice, fresh lime juice, balanced with gomme), or alternatively, the Glistening Gold with elderflower liqueur and Calvados shaken with fresh lemon juice and mango juice, topped up with Champagne. 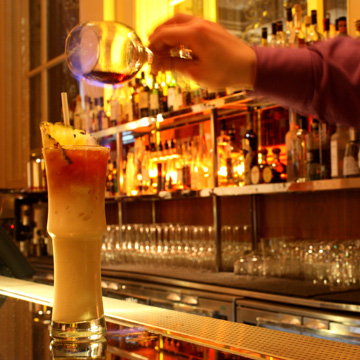 Bonds, Threadneedle Street
Catering for all types of London Olympic fans, the restaurant and bar in the heart of the City offers an Olympic Brunch for those keen for daytime adventures, and an Olympic cocktail, called The Bonds Flame, for those wishing to celebrate the Games in the evening. The cocktail, as you might well expect, is served flaming, but doesn’t have to do the tour of the British Isles before making its way to your table.

Method: Place half a fresh banana in a blender with Wray & Nephew Overproof Rum, Crème de Banane liqueur, fresh pineapple juice and coconut syrup over crushed ice. Once it looks like a smoothie, pour it into a sling or High Ball and garnish with a wedge of Pineapple and slice of banana. Prepare a wine glass with some Goslings Rum and a cube of Demerara sugar, flame the rum and once it heats up pour over the drink. 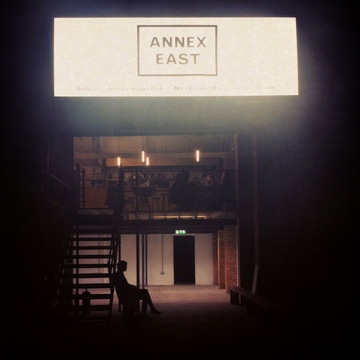 Garcia is the mastermind behind the itinerant Southwest Supper Club that pops up in a range of art galleries (such as Arthaus, Hackney), cafés and wine shops across London, accompanied by different forms of entertainment, ranging from jazz recitals, to wine and beer tastings, to movie nights with films chosen to match the meal. 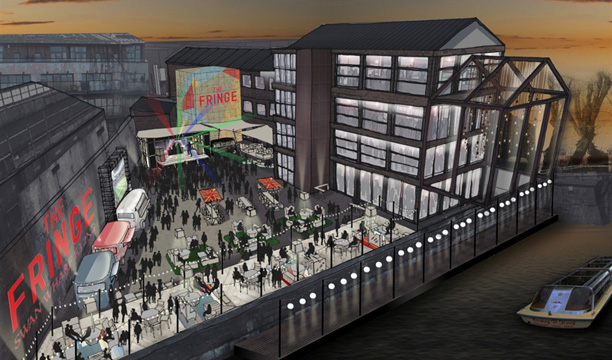 For those inclined to watch the London Olympics live in style, The Fringe is a pop-up venue and bar in a large converted Victorian warehouse spitting distance from the Victoria Park entrance to the Village. With capacity for 1,000, the club offers music with DJs such as Norman Jay, large screens, Michelin-starred food and drinks for the duration of the Games.

The place is decorated in a suitable flash style, with Philippe Stark chandeliers overhead and Tim Flach photos on the walls. Daily membership costs up to £150 (although less exclusive entry starts at £35 for the day) and includes three drinks, plus entry to the club and bars overlooking the stadium. A £40 evening pass includes access to the club, courtyard and bars. Six week membership is available for those feeling the need to savour every moment of the Olympics live (and those with healthy wallets). 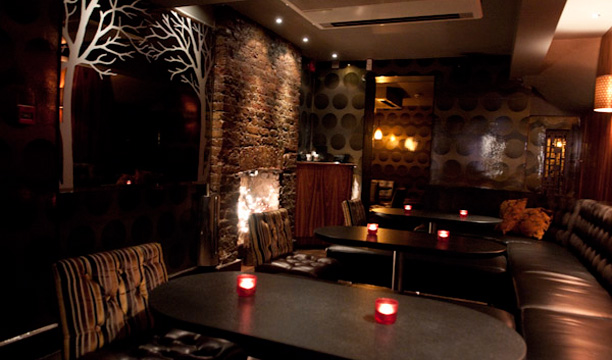 The exclusive Chelsea club, Eclipse, with two outlets, one in South Kensington and the other in Chelsea is getting into the spirit of things this summer in a number of ways.

The South Kensington outfit is starting with an Olympic Toga Party on 9 August to celebrate the origins of the Games. For those who miss the Toga Bash, or don’t fancy wearing a sheet, the celebrations will be on-going throughout the summer in the Chelsea branch with a selection of Olympic themed cocktails, called the ‘Elixirs of Olympus’, which are available in Gold, Silver and Bronze packages.

In a feat of generosity, guests will receive a second Olympic cocktail free if they order before 9pm. In addition, guests from gold-winning countries will receive a free house cocktail, the Crackbaby (a passion fruit and Champagne concoction), so be sure to check the results before getting to the club. 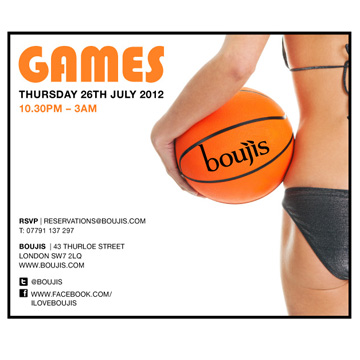 This highly exclusive members club is launching what it simply calls ‘Games’ on Thursday 26 July in the run up to the festivities. As far as we can tell, it’s a themed evening for members with themed fancy dress and dancers. To be a member you need to be approved by two existing members. Sounds as if it might be easier to get a last minute ticket to the men’s 100m final… 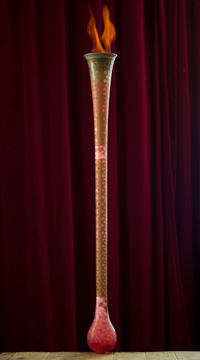 For an Italian vista on an otherwise exceptionally British summer, Battersea’s Bunga Bunga club is transforming itself into what it describes as the “Ultimate Italian Players Lounge”. The bar will have a board totting up the medals brought ‘home’ by their team of “Italian Stallions”, with waiters and staff enjoying a moment or two of respectful silence to do homage to their great team every time a victory is claimed. Similarly, the Italian national anthem will be belting out continuously throughout the Games, like a beacon of hope to home-sick Italians all over London.

To welcome the Games in in style, the bar/restaurant/club will be hosting an Olympic Opening Ceremony party on Friday 27July, where revelers can win themselves a Bunga Bunga gold medal for their Karaoke efforts. To celebrate their victory (or drown their miseries), or merely to enjoy a typically Italian experience, guests can toast the start of the games with the yard high Olympic Flame(ing cocktail), called ‘La Torcia Olympica’ with Grey Goose Vodka, Amaretto Saliza Veneziano shaken with pink grapefruit Juice and finished with home-made Bunga Mandarin Bitter and Terra Serena Rose Prosecco. Breaking all records, the Olympic flaming torch cocktail will be a yard high, enough for 4-5 people to share…depending on their drinking stamina. 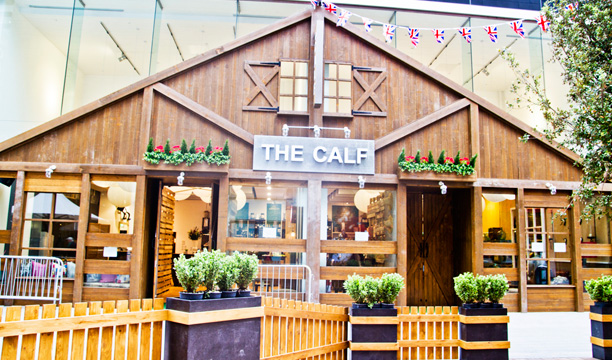 The first ever pop-up pub in London is a convenient distance from the Stratford stadium, and will offer Games goers a ‘colourful and quirky’ place to grab a drink or a bite to eat en route to or from the Games. The pub is the little sister of The Cow pub, also in Westfield shopping centre, and is run by parent company Geronimo Inns pub group. With views over the stadium and a real mix of Games enthusiasts from all over, The Calf promises to be an exciting location in the Stratford site. 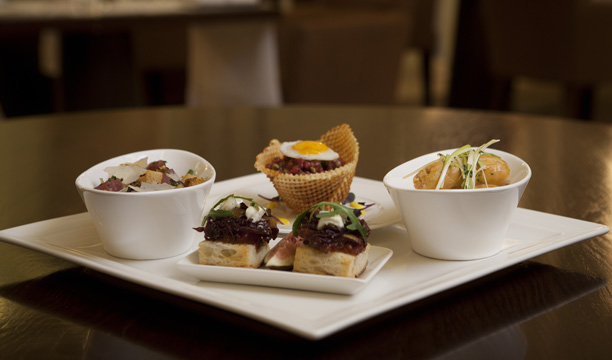 The hotel’s restaurant, 1901, is running a World Food Marathon, featuring 26 dishes from around the world, in honour of the impending Games. The hotel turned to its international staff, hailing from 40 different countries, and asked each of them to suggest a local speciality. Twenty-six of these were then selected (one for each mile in a marathon), and were served as the daily special for a 26 day period, which ends on Friday 27 July.

The themed dishes are part of a broader Olympic menu, with starters all representing a British nation. Not to be outdone on the drinks side of things, the aperitif-style drinks come under the heading of Opening Ceremony, and after dinner tipples under Closing Ceremony, with a solid array of medal/Olympic named cocktails thrown in.

Opening ceremony: Torch – £14.00
Pineapple puree, apricot brandy and Pampero Blanco rum topped with NV Prosecco Extra Dry Rizzardi and splash of grenadine syrup.
Inspired by the 1901’s head bartender Giovanni Castorina as a delicious way to honour the achievements of past Olympians and to invite the new generation to London 2012

Closing ceremony:  Brazil – £14.00
Infused cinnamon Beja Flor Gold 10yo Cachaça, fresh orange juice, lime wedge and sugar syrup.
In honour of the Games of 2016 and to thank London for hosting the 2012 Olympics. 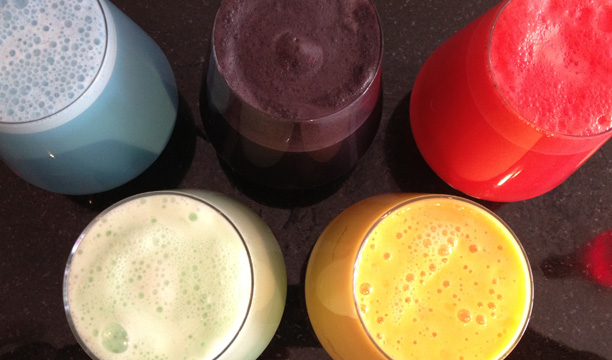 This organic Indian in Camden town has created an Olympic menu with predominantly fish-based dishes, on the basis that fish was the main fare that would have been eaten by the original Olympians back in the day, with dishes such as the Quintet of fish (one for each ring), and the Quintet of fresh fruit dessert.

Continuing with the ring theme, they have also created a different lassi for each of the rings; blue with blueberries and blue curaçao syrup, yellow with mango, black with blackberries, blueberries and red grape juice, green from apple yoghurt and pistachio kulfi, and red with pomegranate juice, cranberries and cherry yoghurt. 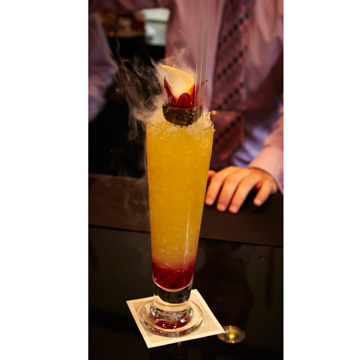 Not one to let the Olympics pass by unnoticed, the clever bar staff at the lobby bar at One Aldwych have come up with their own flaming cocktail, called The Olympic Torch. The concoction ‘flames’ thanks to some dry ice, and, with a passion fruit half for garnish, looks a sight more appetising that the actual flame. 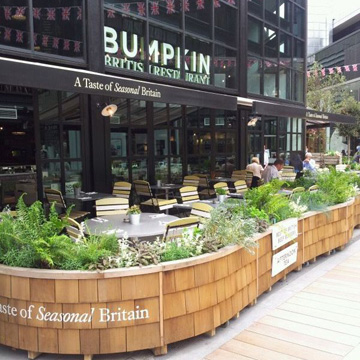 The bar/restaurant which celebrates the ‘Best of British’ through its food and drink in the Westfield centre is one of the few bars that has been given permission to continue using their outside terrace during the Games, offering an excellent viewing point, especially with their extended opening hours (from 8am for the early birds to 12am for the night owls).

The restaurant, while not very international in its fare, will counterbalance its national focus by hosting a range of events and parties for the Olympians, sponsors and their guests over the course of the Games. Situated right by the stadium, it’s a perfect spot to watch the champions go by whist sipping their own-brewed Bumpkin Draft, especially brewed by Shepherd Neame.