The Idaho State Liquor Division (ISLD) has banned the sale of Utah-produced Five Wives Vodka as it “is offensive” to the State’s prominent Mormon population. 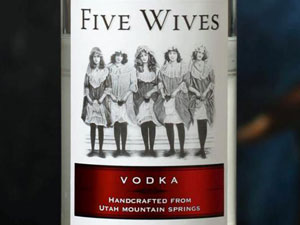 The product, which features five women dressed in Mormon attire hitching their skirts up on its label, was launched in November last year by Ogden’s Own

Distillery and has sold almost 1,000 cases in six months in its home state, ironically the centre of Mormon cultural influence.

However with 27% of Idaho residents being members of the Church of Jesus Christ of Latter-Day Saints, the ISLD moved to ban distribution of the vodka to protect the “safety and well-being” of its citizens.

“Social responsibility is very important aspect of the marketing and sales of distilled spirits in the State Idaho, ” Howard Wasserstein, deputy director for Procurement, Distribution and Retail at the ISLD said in a letter to distributer Elite Spirits Idaho. “Products that we feel are marketed toward children, or are in poor taste with respect to our citizens will not be authorised for distribution.

“We feel Five Wives vodka concept (sic) is offensive to a prominent segment of our population and will not be carried.”

Ogden’s Own had received orders for Five Wives Vodka from a number of establishments in Idaho and was due to sponsor the State’s Boise Music Festival on 7 July. However the company has since been forced to withdraw its involvement with the event.

“Between sponsorship and attending the concert, we estimate the company would’ve spent near $10,000 in Boise over the weekend of the festival,” Steve Conlin, partner and vice president of marketing at Ogen’s Own said. “We’d love to bring a group and represent our brands at an event of this magnitude. It’s unfortunate for the community – not just us and Elite Spirits. We love the city of Boise and are disappointed by these developments.”

He continued: “If the reaction is because of a religious concern, we think they are extremely misguided. We can only presume (Wasserstein) means Mormons.

Though that makes little sense as they allow Polygamy Porter from Wasatch Beers of Utah to be sold. We’re a little dumbfounded by it all.”

Ogden’s Own have since launched a campaign to overrule the decision, releasing a ‘Free the Five Wives’ t-shirt, and is reportedly in talks with lawyers about taking the matter to court.