The UK is set to enjoy a four-day weekend next week in celebration of HRH Queen Elizabeth’s Diamond Jubilee – presenting a perfect opportunity for British and Commonwealth citizens to raise a glass of their favourite tipple in her honour.

As such, several brands with a right British connection have released special commemorative expressions available for a limited time only.

The event marks an opportunity for producers to reinvigorate their brands through association, and while some have released brand new extra-rare expressions with luxurious packaging donned with crystals, others have gone down the limited edition label redesign route.

But from Scotch to bitters and the staple British summertime drink Pimm’s, and regardless of the price tag, it seems many a brand has gotten into the Jubilee spirit.

And so have we, for here is a run-down of our Top Ten special-release Diamond Jubilee spirits. 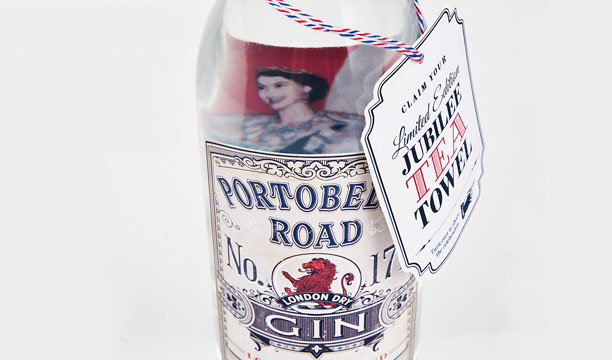 London bar group Leelex has marked the Diamond Jubilee with a special edition gin bottle – and that most quintessentially English of gifts-with-purchase: a tea towel.
The limited edition of premium gin Portobello Road 171 has a commemorative bottle designed by brand specialists Analogue, and has been stocked by UK department store Harvey Nichols.
Part of a limited run of only 500, each bottle features a picture of Her Majesty on the inside of the back label and is accompanied by a tea towel including the recipe for Portobello Road Street Party Punch to help get the celebrations started.
Portobello Road 171 was created in a small distillery above a bar in Notting Hill, London; what started out as an effort to demystify distillation has culminated in plans for Leelex to distribute the brand internationally.
Analogue creative director Barry Darnell said the brand was “exciting and fun to work with”, adding: “Their nod to history and playful nature allowed us to create a fantastic extension of their brand.” 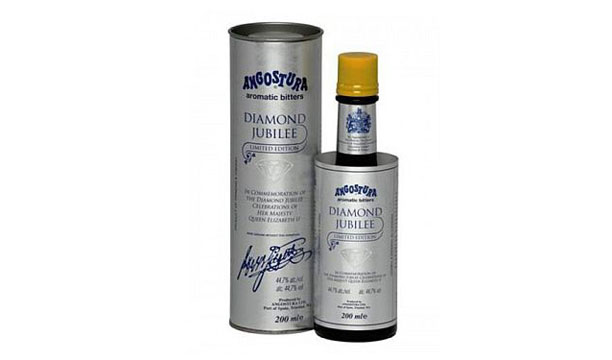 Back-bar staple brand Angostura has unveiled the first limited edition bottle for its bitters in its near 200-year history to commemorate the Queen’s Diamond Jubilee celebrations.
Sixty years since Elizabeth II ascended to the throne and a full century since Angostura was granted a Royal Warrant by King George V, the limited edition design has been made available through UK retailer Waitrose.
Only 6,600 bottles have been put on the market by Angostura, which will donate £1 from every bottle sold to the Queen Elizabeth Scholarship Trust (QEST) which helps to support craftspeople in the UK.
“This will be the first change that we have ever made to the product in nearly 200 years, with both the recipe and the label remaining the same since 1824,” said Alex Thomas, senior manager of sales and marketing at Angostura.
“Angostura was first awarded a Royal Warrant in 1912 by George V, it was transferred in 1947 to George VI and finally to The Queen in 1955. We wanted to not only celebrate the Diamond Jubilee with a limited edition pack, but also to acknowledge such a prestigious honour by donating to the QEST appeal.” 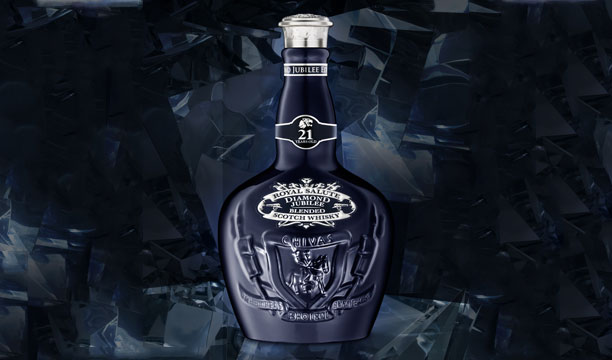 Royal Salute for the Queen’s Jubilee (and some fine Scotch, too)

Chivas Brothers-owned luxury blended Scotch whisky Royal Salute has more reasons than most to launch a limited edition bottle for the Diamond Jubilee celebrations.
The brand was created in 1953 to mark the coronation of Queen Elizabeth II, and its Royal Salute Diamond Jubilee Limited Edition takes the form of a porcelain flagon sporting an appropriately rich royal blue glaze.
Only available during this year’s Diamond Jubilee celebrations, the edition is packaged in a hand-crafted display box and is being launched in over 20 markets, supported by retail displays that are themed on the light-reflective qualities of a diamond.
“Royal Salute was originally created to mark the coronation of Queen Elizabeth II,” said Neil Macdonald, Royal Salute’s global brand director. “We are therefore delighted that this Royal Salute Limited Edition will celebrate the Diamond Jubilee – as it is only the second time that this milestone has been achieved by a British monarch.”
Available now, the recommended minimum retail price is US$164 for a 70cl bottle. 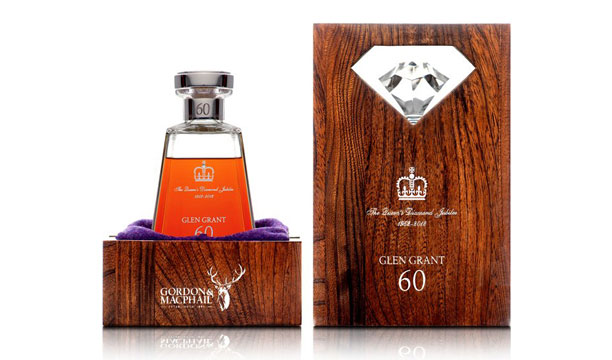 Glen Grant’s £8,000, crystal-encrusted 60 year-old Scotch
Malt whisky specialist Gordon & MacPhail has unveiled a highly appropriate 60-year-old special edition of Glen Grant to mark this year’s Royal celebrations.
The Elgin-based and family-run company has released only 85 bottles of the whisky, which was distilled on 2 February 1952 – four days before the Queen acceded to the throne – and bottled on 2 February this year at cask strength, making it precisely 60 years old.
Glen Grant 60-year-old is bottled in a pyramid-shaped crystal decanter with a stopper in the form of a diamond, with each numbered decanter featuring expert engraving in-filled with silver plus an engraved crown with a Swarovski crystal.
The decanters also have a silver collar at the neck and are packaged in a box of Scottish elm, felled a short distance from the Queen’s official Scottish residence at Holyrood House.
“With whisky of this quality and rarity – each bottle comes with a certificate of authenticity – we expect considerable interest, not just in the UK, but from the international marketplace where recent export figures have shown we have an avid consumer following,” said Gordon & MacPhail joint managing director Michael Urqhart.
The whisky has a UK RRP of £8,000 per bottle, with international pricing varying depending on duty and import taxes, and the launch is supported by an online social media campaign and dedicated microsite and Facebook page. 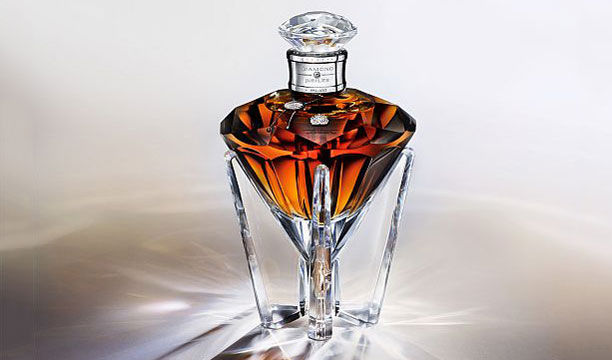 John Walker doffs his hat to HRH for Diamond Jubilee

Johnnie Walker’s top-end off shoot John Walker & Co has released a very limited special edition Diamond Jubilee bottle.
Only 60 bottles of the spirit from 1952, bottled on the 60th anniversary of the queen’s ascension to throne, have been made, and have an asking price of £100,000. The Queen will receive one for free.
The packaging contributes significantly to the cost; Baccarat crystal decanters shaped in the form of a diamond have been filled in the Royal Lochnagar Distillery on the edge of the royal Balmoral estate.
All profits will go to the Queen Elizabeth Scholarship Trust (QEST). 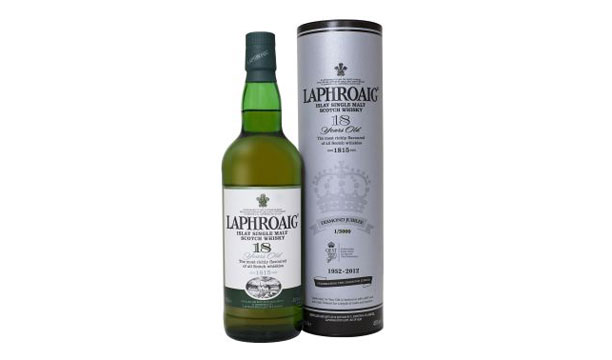 Laphroaig honours Jubilee with Royal Warrant-focused packaging
While the number-of-the-moment is 60, Islay’s Laphroaig has championed 3,000 – with 3,000 bottles of their limited edition commemorative bottles produced, and a pledge to donate £3,000 to the QEST.
The special edition 18 yr old single malt comes in special edition packaging, each with its number out of the limited 3,000 bottle batch.
The brand has strong links to the royal family, particularly the Prince of Wales who has visited the distillery twice, once to celebrate his own 60th birthday in 2008, and through its status as a royal warrant holder.
The whisky will be available in the UK from June in specialist outlets, and will retail for £77. 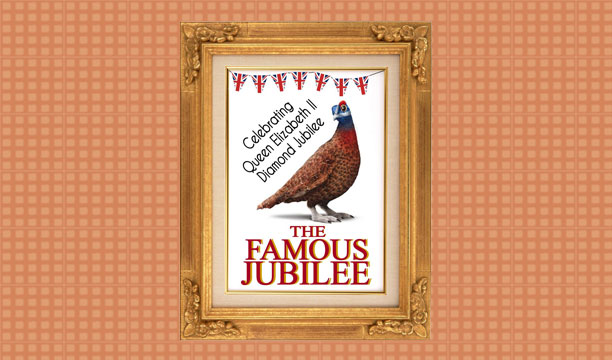 The Famous Grouse honours the queen with a new bottle and a sponsored kilt run
The Famous Grouse is celebrating the Queen’s Jubilee with a specially renamed packaging, replacing the all-important ‘Grouse’ with ‘Jubilee’, for The Famous Jubilee edition.
Not satisfied with simply launching a limited edition bottle, the blended Scotch brand is attempting to break the Perth Kilt run record, aiming to get 2,000 runners to don a kilt and run 8km through Perth on the day of the Queen’s Diamond Jubilee celebrations. The current record is held by twin city Perth, Ontario, where 1,089 runners took part.
Glen Gribbon, director of The Famous Grouse, said: “As the home nation of the kilt we really feel it is a matter of national pride that we take this record from our friends in Canada and what better time to attempt it than the Diamond Jubilee weekend. We are thrilled to be involved in the celebration and hope we can all break a world record at the same time.”
Participation is free, and all runners must be over 15 years old. 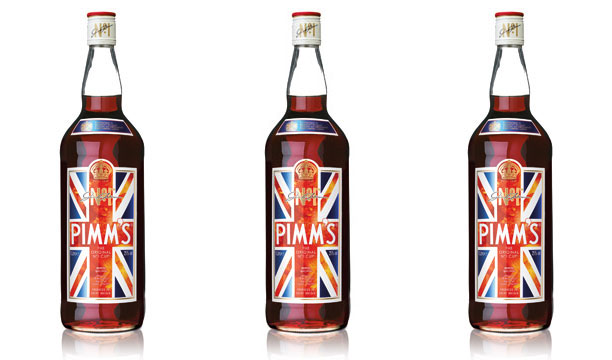 Union Jack jeroboam bottle makes Pimm’s o’clock last all day
Pimm’s No.1 Cup has donned a bright, patriotic label to not only mark a summer of British celebrations, kicking off with HRH Queen Elizabeth’s Diamond Jubilee, but in recognition of its recently acquired Royal Warrant.

Limited 70cl and 1 litre bottles of Pimm’s featuring the Union Jack are now available from supermarkets across the UK, but those consumers looking to party in style – and with many friends – can pick up an even rarer jeroboam (3 litre) bottle from Selfridges.

Pimm’s has teamed up with the department store to offer the ultimate in street party tipples, also decked out with a Union Jack label for the Jubilee. There are only 150 bottles made, which are retailing for £150. 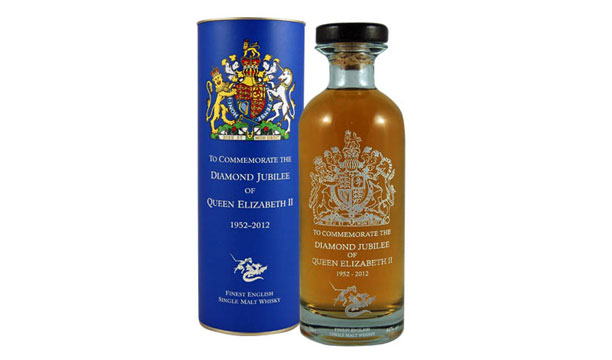 Royal blue theme for the English Whisky Co.
The English Whisky Co’s Jubilee special edition comes in a clear bottle with the royal crest engraved into it, and a suitably majestic presentation tin in royal blue. Only 3,300 bottles were made, of which only 50 remain (at time of writing), retailing for £59.99 each.
For those keen to embrace the royal season more thoroughly, there is also the royal wedding and Diamond Jubilee gift pack which comes with a couple of glasses, going for £119. Of the 25 originally made, only a couple of the gift packs remain. 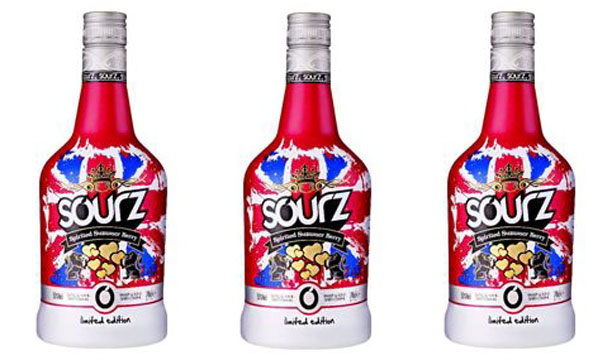 Sourz punks it up for Britain

Sourz has re-released its Spirited Summer Berry edition but with a new ‘Brit Pack’, punked-up bottle design, launched to coincide with the packed summer of events taking place in Britain over the next few months, starting with the Queen’s Diamond Jubilee on 3 June.

Available in both the on and off-trade, the bottle is part of a £10m investment in the brand, which features a number of high-profile marketing initiatives. The flavour was first launched for Summer 2010.