Tomatin single malt Scotch whisky is being taken on a two-month tour of Japan on the side of a traditional London double decker bus this week. 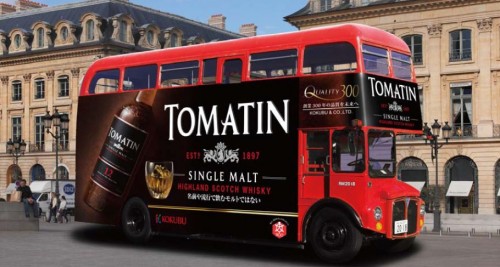 The Japanese distributor for Tomatin, Kokubu & Co, is conducting the marketing push as part of its 300th anniversary celebrations.

Starting in Tokyo on 9 May the red double decker bus will travel through Sapporo, Yokohama, Fukuoka, Hiroshima, Osaka and Nagoya, finishing in Sendai on 3 July, offering onboard visitors a sample of Tomatin.

Graham Nicholson, regional sales manager for Tomatin, said: “This is an exciting and innovative campaign and we are thrilled to be associated with Kokubu on this momentous anniversary. Our partnership has gone from strength to strength since 2005 and we look forward to continuing this into the foreseeable future with further brand growth in the Japanese market.”

Tomatin, which has been distributed by Kokubu since 2005, is the sixth best-selling single malt Scotch whisky in Japan.