Chivas Brothers is to increase malt whisky production by 25% over the next year to cope with the anticipated growth in demand for premium Scotch whisky in international markets. 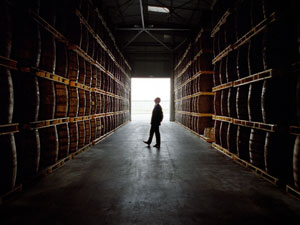 The company, Pernod Ricard’s Scotch whisky and gin business, has committed to an annual capital spend of £40m, expanding its distilleries at Glenallachie, Glentauchers, Tormore and Longmorn, and reopening and extending the dormant Glenkeith distillery, which alone will provide 6m litres of pure alcohol a year.

Chivas’ grain distillery is working at full capacity, and the company is extending and increasing supply agreements with other grain distilleries to meet its growth targets.

In addition, it is to open a new bottling hall for ultra-premium Scotch in Paisley this summer, to cope with soaring demand in developing markets for aged and luxury whiskies.

“The higher you go in terms of price, the higher the growth rate,” Chivas Brothers chairman and CEO Christian Porta told investors and journalists during Pernod Ricard’s annual Capital Markets Day presentation, held at The Glenlivet distillery on Speyside.

“This awful word invented by us – premiumisation – is happening everywhere, in emerging markets but also in mature markets.

“We believe that that growth will continue because that growth is underpinned by strong economic and consumer trend foundations.”

Porta said that the company’s Chivas Regal blended Scotch brand had sold 4.9m cases in the year to the end of March.

“We want to maintain and premiumise our stronghold in Europe, continue to grow strongly in Asia, and fast-track development in the Americas, especially Latin America, and in Africa,” Porta added.