Chivas teams with silver screen producer for US ad 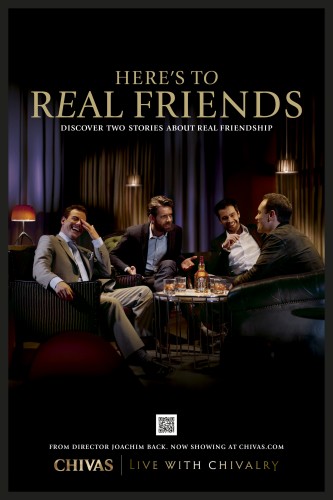 The 30-second advert (there’s also a 60-second variation) depicts a group of male friends reminiscing about past adventures. It was aired in the US at the start of November, but is available online across the world.

Wayne Hartunian, vice president of marketing whiskies for Pernod Ricard USA commented: “Joachim Back has created a TVC that celebrates true friendship between men and further strengthen the emotional bond between Chivas and its consumers – The Chivas Brotherhood. By utilizing social media outlets including YouTube, Facebook and chivasbrotherhood.com, we have created a platform that will appeal to and engage these modern, discerning men who enjoy film and popular culture.”

Entitled “Real Friends”, the ad is in line with the “Live with Chivalry” campaign that was initially rolled out in 2008.

You can watch the extended 60-sec ad here: http://www.youtube.com/watch?v=JXYT-1W1byM