French liqueur brand Cointreau has unveiled a redesign of its ‘iconic’ bottle, which is said to be the biggest revamp in the brand’s 140 year history.

For the first time since Cointreau’s conception in 1849, the bottle now depicts the orange – Cointreau’s key ingredient – on the label.

Speaking to The Spirits Business, Fanny Chtromberg, international director at Cointreau, explained the decision behind the redesign: “When I first joined Cointreau in 2017, I realised that because it’s a square bottle with amber glass, you can’t see what is inside, and because of that, people don’t know how to use it. This has been our challenge worldwide. 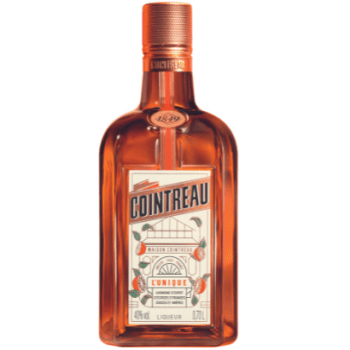 “So we said, maybe we should try bring the precious fruit, the orange, from the inside to the outside, and show people that Cointreau is made with orange.

“At the beginning, it was quite a challenge, because people aren’t used to seeing the orange on the front label. And then very quickly, people said, ‘yeah, this is obvious’. So that was the first thing we obviously redesigned – it’s still a square bottle, its’ still amber, but we have fine-tuned it.”

In the background of the label there is an illustration inspired by Cointreau’s first distillery, based in Angers, France.

The label also features embossed copper-coloured elements – a nod to the copper stills in which Cointreau L’Unique is made.

Chtromberg  continued: “I wanted to bring a little bit of history to the bottle, so we did some research to find the first real distillery in Angers, and we have used the illustration of the door of that distillery. We wanted to give the customer the feeling like they are entering into an orangery.”

On the label there is also the proclamation of the Maison’s heritage. It reads: ‘Harmonie d’esprit d’écorces d’oranges douces et amères’, which translates as ‘harmony of sweet and bitter orange peel spirit’.

Raised renderings of the stained-glass windows at the Angers distillery on the side of the bottle also honour the Maison’s history and give the bottle ‘added flair’, while also improving overall grip. 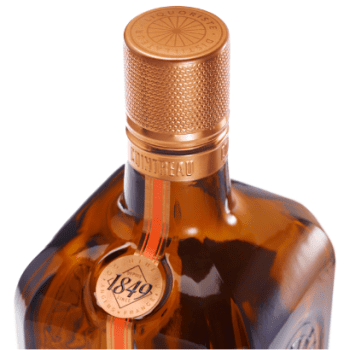 The ‘iconic’ square bottle design remains unchanged, however it has been lengthened by 4mm for ease of pouring without increasing its weight, which the brand noted was ‘a major technical challenge’.

The new bottle is made from two-thirds recycled glass, and features materials sourced from France and surrounding European countries.

The bottle’s copper cap now comes with a mention of the brand’s savoir-faire as a ‘Distillateur-Liquoriste’, and a new textured, embossed finish inspired by the skin of an orange. The latter is said to be more than just an aesthetic change: the peel-inspired pattern also provides better grip for an easier twist-off.

The edges along the four corners of the bottle have been made more prominent to add a ‘pleasant solidity and balance’ that mirrors the ‘balanced flavours’ of Cointreau L’Unique, as well as the four ingredients at its source.

The QR code grants instant access to a dedicated online experience on cointreau.com; where consumers can access 400 cocktail recipes and expert tips.

The redesigned bottle will be released in the UK in autumn 2022, and is set to be available worldwide by the end of the year.

Earlier this year, we sat down with Cointreau master distiller, Carole Quinton, to talk about what goes into making Cointreau L’Unique.