With sun-dappled European rooftops, swim-up infinity pool bars and basement speakeasies that once hosted performances from the legends of 70’s rock’n’roll, the global bar scene was on fire in April, with some of the hottest new openings of the year so far. 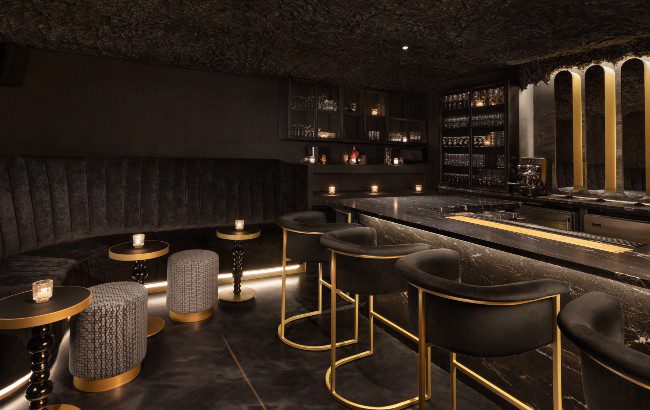 Those with a penchant for witchcraft, magic and alcoholic potions should prioritise a trip to Boston to explore the mysteriously sexy offering found at Hecate, while high-ballers in London should make their way to the city’s newest neighbourhood for a round of complex yet approachable Highball serves at Soda & Friends.

If rum and good times are your vibe, the return of Sugar Hall to Singapore should give you all you’re looking for. Or if poaching yourself in a geothermal pool while sipping on something delicious sounds more appealing, Iceland’s latest lagoon needs to join your bucket list.

Read on for our pick of the best bar openings from last month – and for more new venues, check out our list from February 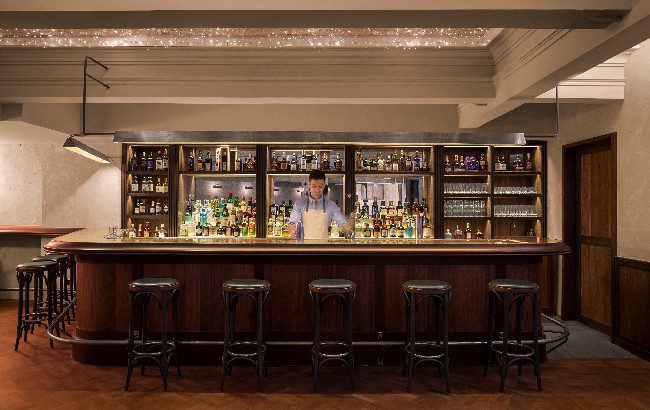 April saw the return of Sugar Hall, a rum-focussed pub located in the centre of Singapore’s Central Business District (CBD). After a five-year hiatus, the vibrant bar has reopened its doors above its sister venue, the ‘fancy-but-fun’ Rosemead, and its where drinkers can go for approachable but expertly created cocktails five nights a week.

The serves tend to favour rum as their base spirit, but there’s a cocktail for everyone. Much of what the team creates here will allow you to rediscover a classic with a Sugar Hall twist – because apparently not all heroes wear capes; some shake Daiquiris. 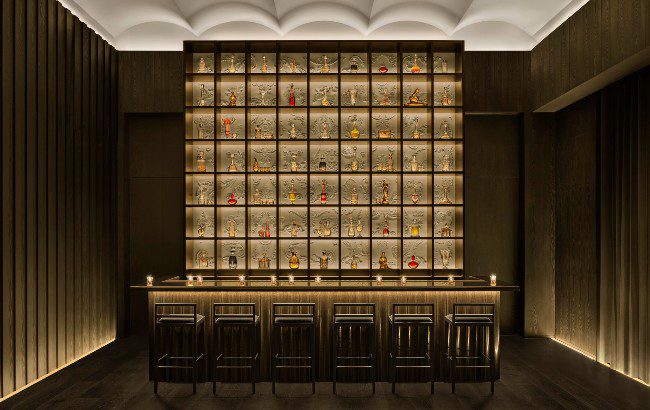 Bringing a whole new dimension to Tokyo’s vibrant bar scene is the latest venue presented by the Edition Group.

Found on the ground floor of the hotel, Gold Bar at Edition has enough space for up to 87 guests to savour the ‘exceptional moments’ the sophisticated bar has to offer. The space has been decorated with charred timber cladding, which contrasts with lavish gold decorations, including gold leaf art, lampshades, unique antiques and candles. Understated it is not.

Inspired by the ‘Golden Age’ of cocktails, drinkers can expect to see elevated takes on the classics, such as Martinis, Daiquiris and Manhattans, all given contemporary twists using local Japanese flavours. 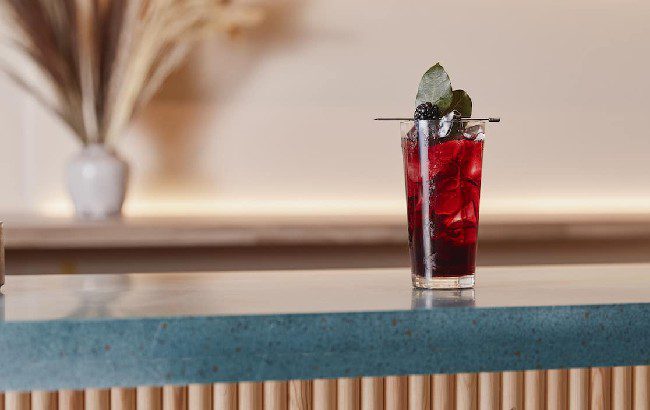 This minimalist Nordic-meets-Japanese style bar, located in the new neighbourhood of City Island in London’s East End, has opened with one key mission: to champion iconic Highball serves that showcase fine and rare spirits with a story to tell.

Using house-made cordials, liqueurs and ferments, lengthened with a range of sodas and seltzers, the Highball menu features cocktails including the Soda House Highball, a pear, apple and plum highballer made with whisky and soda; and the Irish Air Con made with cantaloupe melon, Pommes, Irish vodka and cucumber soda. All the serves are complemented by bar snacks and a meticulously chosen tea menu. 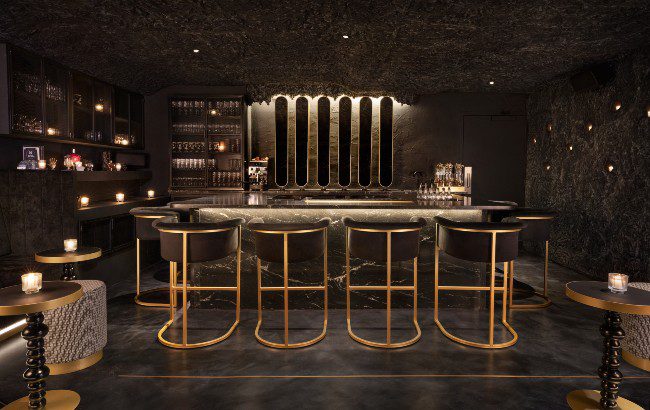 Described by the owner has having a “mysterious and sexy vibe”, this Boston bar doesn’t have mixologists, it has ‘spirit guides’, and is named after ‘the badass witch’ of Greek mythology. It’s probably no surprise to hear that this dark, seductive, cave-like basement bar has already proven itself very popular since its doors opened in early April.

The glowing candles contrast with the black rock walls and sumptuous black furnishings, while the eight-seat, black marble bar is illuminated by the only electric light in the place. The leather-bound drinks menu resembles a book of spells, and features 10 seasonal cocktails, each with its own mystical backstory. 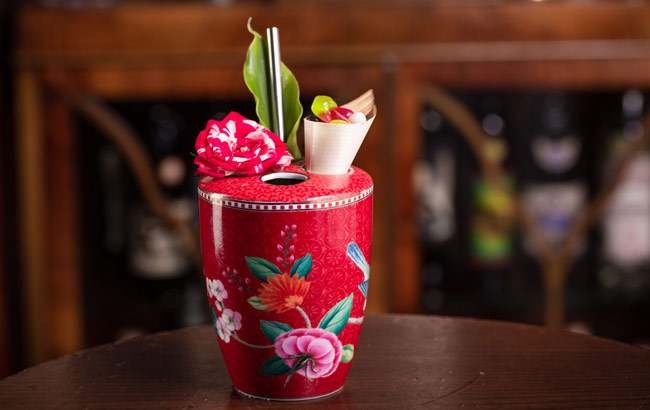 London’s original modern-day speakeasy got its much awaited sequel last month, as Nightjar Carnaby opened its doors in London’s Kingly Court at the beginning of April. Recreating the vibe of the east London original, it features playful cocktails presented in the same iconic glassware the original bar is known for, served with a backdrop of Prohibition-era inspired decor.

Alongside the cocktail menu, which features an entire section of ‘Nightjar Carnaby originals’ to set it apart from its big sister, Nightjar Carnaby has also brought its A-game to its bar snack offering, with smoked mozzarella and jamon serrano toasties, and Catalonian romesco with olive crackers – the perfect accompaniment to an evening of late-night live music in a basement which played host to The Beatles, The Rolling Stones and The Who in a previous life.

As if Iceland wasn’t already famous enough for its lagoons and thermal spas, the team behind the famous Blue Lagoon has now built the Forest Lagoon in the north of the country, and it features two swim-up bars.

Construction of the 7,500-square-foot-pool and its smaller, hotter sister pool began following the accidental discovery of a geothermally-heated water source in the Vaðlaheiði mountain back in 2015. Now that water has been channelled to create a new spa which sits within a pine and birch forest, which you can look over as your sit at one of the two swim-up bars with a glass of something chilled in hand.

You’ll also find a bistro and – if you’re feeling brave enough – a cold plunge pool to bring your temperature down and your heart rate up after a relaxing session in the sauna. 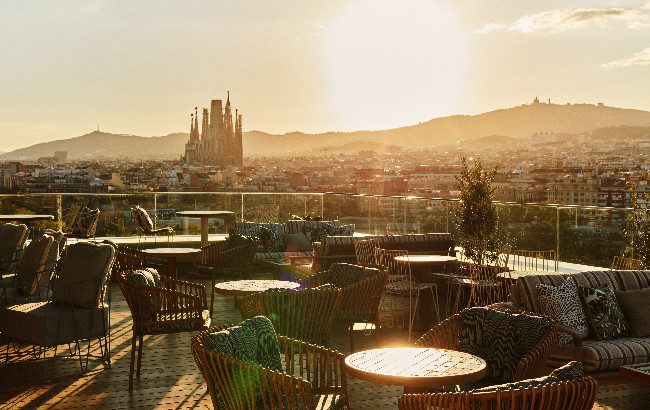 Fancy a Picante with a view? The latest opening from The Hoxton in Barcelona offers jaw-dropping views of the Spanish city from its sun-dappled roof top. The perfect place for sight-seeing with a cocktail in hand, and undoubtedly the coolest spot to hang out when you’re avoiding the tourists on Las Ramblas.

The creative drinks menu is the perfect accompaniment to the all-day menu of tacos and tostadas made using fresh, local produce. Grab one of the linen-draped cabanas around the pool, or when dusk hits take your seat at the long bar, lit in the evening by hanging terracotta lamps and festoon bulbs which sweep across the dining tables.