Jesse Vida on moving from Dead Rabbit to Singapore’s Atlas

Bartender Jesse Vida rose to prominence at New York’s The Dead Rabbit. The US mixologist has now mapped out a plan for his new home, Singapore’s Atlas, to enjoy the same acclaim. 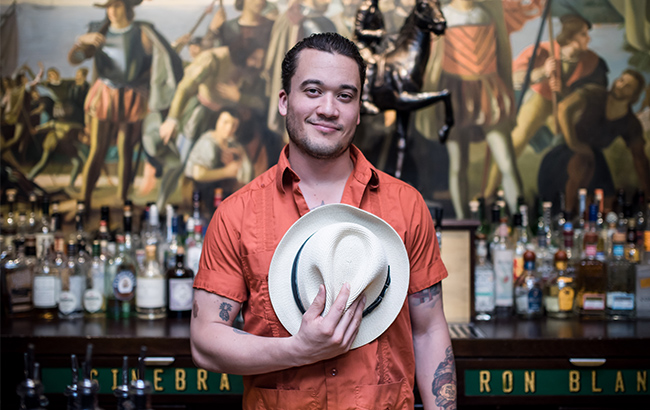 “I was originally going to be a history teacher,” says Californian bartender Jesse Vida. “I always had an affinity for history, and while I was learning about liquor for a speech I was preparing on the whisky rebellion I kind of had this eureka moment.”

This was the moment Vida realised he wanted to pursue a career as a bartender, a decision that has taken him from California, to New York and onto Singapore. Vida, who now works as head bartender at Atlas, says he feels a million miles from where he started out.

Vida gained his first taste of life behind the stick in 2007 at a restaurant bar in San Francisco where a friend had talked him into applying for a job.

“One day I showed up for a trial shift at this new bar and restaurant in San Francisco, and I suppose the rest is history,” he says. “In that first bar I had no idea what I was doing and thought that if I stuck in and worked hard I could get to a good position. So I worked my way up from that entry­-level job to food running, hosting and eventually bartending.”

Since then, Vida has worked in a host of venues, from cocktail bars to fine­-dining establishments, where he learned about the relationship between food and wine. The variety of venues he has worked in is something Vida says helped establish him and get his feet “firmly on the ground”.

Vida’s rise to prominence began when he moved to New York in 2011. Here he was able to build his network of connections and develop his reputation as an up­-and­-coming talent. His “breakthrough moment” came shortly after arriving in the city, when Jack McGarry and Sean Muldoon, of famed Irish bar The Dead Rabbit, came calling. “

That was the moment when everything went up to the next level in terms of the education, the platform, the notoriety, the opportunity and the pressure of working in one of the best bars in the world,” says Vida. “All of those things elevated my game, and I saw my ability and appreciation for cocktails rise to another level.”

Vida started working at The Dead Rabbit in 2013, and in 2015 the venue was named World’s Best Bar at the Tales of the Cocktail Spirited Awards. “It took everybody to get us there,” explains Vida. “It’s not just the owners and the star bartender that make a bar the best in the world: it’s the glass washer, the food runner, the host and everything that makes the venue what it is – that’s what made The Dead Rabbit the best in the world then.”

Soon Vida found himself presented with several options for his next move; he was comfortable working three shifts a week at Dead Rabbit, and had been approached by Aviation Gin to become its New York brand ambassador. At the same time, McGarry and Muldoon approached him with the chance to work at their soon-­to-­open second venue.

“I actually turned Jack and Sean down initially,” says Vida of his chance to lead the duo’s Cuban­-themed bar, BlackTail. When they approached him, the plan for the space wasn’t finished, and the concept for the bar had not been pinned down. However, a few months later Muldoon came back to Vida with the offer.

“Sean broke everything down,” he recalls. “It had been a lot more thought out and they knew what it was going to be. Sean also said that he really wanted me to do this, and that it would be really great for my career. That was when I took the job.” BlackTail opened in August 2016 with Vida as its head bartender, and it was while developing the bar’s beverage programme that he was able to reignite his interest in history.

He says: “Some of my most fond memories of BlackTail were the eight or nine months before the bar opened when myself, Jack and Jillian Vose, the head bartender at Dead Rabbit, looked at all these old books and old menus from 1920s and 1930s. We were looking at things from Cuba, and it was really fun reading all these old recipes and working out ways to make them more modern.”

Over the two years Vida spent at BlackTail he was responsible for developing three cocktail menus, which he says was a project he threw himself into and found “really, really interesting to do”.

After creating the bar’s latest menu, which launched in September 2018 and highlights the untold stories of the women behind the Cuban revolution, Vida announced his departure from the New York venue.

“I had always assumed that I would continue to work with those guys forever,” says Vida. “There is literally nobody like them and there is no accident to Jack and Sean’s success. But I just suddenly started to feel that I couldn’t see a clear path of where I wanted to go in the company and how it would fit with their plans for the next couple of years.”

Vida says he is proud to have led BlackTail to where it is today, but that he felt in need of some time away from New York and the bar; he thought the bar could benefit from a “fresh pairs of eyes”. Vida didn’t have a plan in place for his next steps, and thought about taking some time away to travel and lay low after releasing the final BlackTail menu.

“I was thinking about heading back to California,” he says. “One day I got a phone call from a friend in the industry who had been working in recruitment in Singapore for years, and they said if I was interested they had a great opportunity out there, and that ended up being this job at Atlas.”

As with BlackTail, Vida was initially unsure about the role at Atlas. “At first I wasn’t really sure what this was going to be or if the job was for me,” he explains.

“But through the interview process I spoke with the general manager, the food and beverage director and eventually the bar’s owners, and through those talks I felt like there was some greater vision of what we all thought Atlas could achieve. So I just kind of said ‘eff it, it’s time to take this opportunity’.”

Vida joined Atlas last year, packing up his life in New York and flying to the opposite side of the world. “I had to leave family, friends and all these close relationships behind, and that was definitely challenging,” he says.

After six months at Atlas, Vida has his eyes set on the same level of success he experienced at Dead Rabbit and BlackTail.

“I’d like to see Atlas become one of the best bars in the world, and something I learned at BlackTail is that if you want to be the best it’s a team effort,” he explains.

“For Atlas, becoming the best is going to take all of us. We’re working on a new menu right now, and we’ve also implemented a training programme for all our bartenders.

“I guess I hope that my mark on the bar will be this creative culture and this attitude that if you bartended at Atlas you can become one of the best in the world.”