How bars are getting creative to address allergies

With an increasing number of people reporting allergies or intolerances, bars are using safer alternatives in cocktails to cater to them. 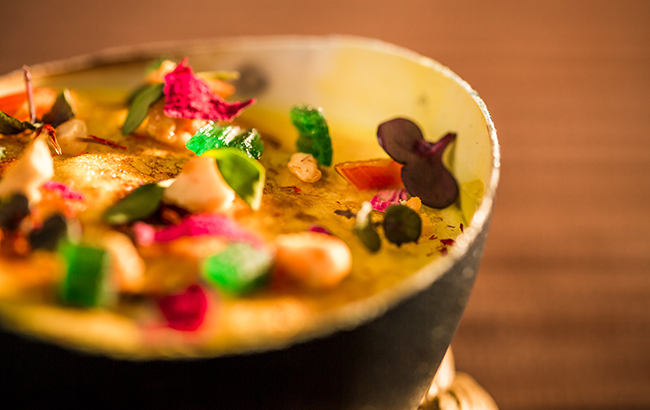 “I’m not vegan, but I would never go back to using cow’s milk and eggs,” says David Kinsey, beverage director at vegan heavy metal bar Kindred. The San Diego venue has become a pioneer in the free­-from cocktail scene, mixing up alternatives to some of the most loved egg-­ and dairy-­based drinks.

However, drinkers who choose to cut out animal products from their diets don’t always do so by choice. According to UK­-based charity Allergy UK, around 11­26 million people in Europe are estimated to suffer from a food allergy, which could include dairy, eggs or nuts – all staple ingredients in a bartender’s arsenal.

From White Russians made with cream, Brandy Flips containing eggs and the Mai Tai made with almond­-based orgeat, some cocktails can be off limits for a variety of reasons. But as the on-­trade becomes more aware of the dietary requirements of some drinkers, new ingredients could expand bars’ repertoires and increase their footfall.

Kinsey says: “Its almost second nature for us to be aware of drinkers with allergies as we are a vegan restaurant and bar, and we need to support customers who have these needs. We’re seeing more venues provide a more robust selection.” At Kindred, Kinsey and his team started out by looking at ways to remove dairy from their drinks. “When we opened we were mixing cocktails with almond and soy milk,” he explains. “But now we use lots of oat milk in our drinks. Oat milk was the first alternative milk that I tried that reminded me of real milk. It’s better because almond and soy milk can feel a little thin.”

It isn’t just specialist bars such as Kindred that are turning to dairy­-free alternatives. At renowned Athens bar The Clumsies, almond milk is used on its menu because of its ability to mix with acids better than cow’s milk.

“The main advantages we find in almond milk and other nut milks is the flavour, and that they don’t coagulate when mixed with acids,” says Alex Simonidis, head bartender at The Clumsies. “We used them as we wanted our drinks to remain creamy, yet light throughout the drinking experience.”

Also turning to milk alternatives is Leeds bar Smokestack, which offers drinks such as the Casanova Shake, made with Saliza Amaretto, Briottet chocolate liqueur, almond milk and Maraschino cherries.

Lee Jones, business development manager at the bar’s owner, Sandinista Group, says: “I had trimmed down the menu but still wanted it to have maximum accessibility. The basic question was, ‘how can I get as many people as possible to try these drinks?’”

The bar now uses alternative milks such as almond and oat to intrigue drinkers. “Using alternatives can provide a talking point with guests, and it can also encourage a better drinking experience for those with allergies or intolerances,” says Jones.

Dairy and its alternatives are also used in cocktails to alter texture, and it’s for this same reason that experienced bartenders add eggs to their drinks.

Classics such as the White Lady and the Whisky Sour use egg whites to create a silky mouthfeel and light layer of foam on top. To create this same texture for those looking to avoid eggs, bars have started to add the liquid from canned chickpeas to their cocktails. Aquafaba, as it’s called, has become the miracle ingredient for those with an aversion to eggs. The protein­-rich liquid is used in recipes such as vegan meringues and can create the foam needed for a perfect Whisky Sour.

“In terms of egg whites, we have replaced them with aquafaba in our signature drinks,” says Simonidis. “We make our own aquafaba by boiling chickpeas, which are very high in protein, then we strain them and collect the water. We then reduce the liquid and stabilise it with sugar and gomme Arabic.”

The bar then uses this ingredient in its Greenhouse Sour, which is a twist on the classic Gin Sour and is also made with lacto­-fermented pink cabbage cordial.

Aquafaba has also been adopted by London bar Oriole, which uses the ingredient in its Kathmandu Sour. Mihai Ostafi, head bartender at Oriole, says: “The Kathmandu Sour is our twist on a Whisky Sour, where we’ve used flavours from this part of the world – including lotus nut aquafaba. We knew that the water from chickpeas operates as an alternative to egg white, so decided to do a few trials with different products.”

Eggs and dairy can be easy to spot on cocktail menus, but for those suffering from nut allergies, almonds and other tree nuts can be lurking in ingredients they may not know to look out for. Orgeat and falernum can both pose health risks for drinkers with a nut allergy, and according to UK-­based charity the Anaphylaxis Campaign, the number of people suffering from these allergies is on the rise.

At Kindred, the team has begun working with avocado pits to make a nut­-free orgeat syrup. Kinsey says: “Living in California, the avocado is basically our national fruit, so we save up the pits, toast them and turn them into a syrup.”

The bar began investigating this option out of a desire to offer its drinkers something different, while also striving to reduce its impact on the environment. Another US bar that has been working on nut alternatives is New York’s Hunky Dory.

Opened by Claire Sprouse, co­founder of bartender resource the Tin Roof Drink Community, Hunky Dory is a sustainability-focused bar in Brooklyn. The venue strives to reduce its carbon footprint and cut down on waste, and to this end has created a nut alternative it hopes will improve the bar’s water use.

“While traditional orgeat made with almonds is delicious, it is not a very water-sustainable ingredient, requiring massive amounts of water to grow the crops,” says Sprouse. To replace this tiki staple, Sprouse developed her own sunflower seed orgeat.

She says: “The flavour is familiar but not – it’s still nutty, but with an additional woodiness and bitterness that typically comes from almonds. The oil from the sunflower seeds adds a different texture too; it’s smoother and fatter, but still binds to the other ingredients.”

For both Kindred and Hunky Dory, sustainability was the main reason for investigating nut alternatives – and this same reason could encourage other venues to adopt a host of allergy-­friendly ingredients.

“Despite the technical reasons behind using dairy and egg alternatives, it is our overall consensus that limiting the use of animal products to the bare minimum is of utmost importance for our environment,” explains Simonidis. “This was the reason behind starting to think of alternatives in the first place.”

While tackling the issues that hold back some drinkers from the bar, each of these venues has opened up its menu to a host of new imbibers. Whether for health, environmental or lifestyle reasons, nuts, eggs and dairy can be a barrier for cocktail lovers the world over – a barrier these venues prove does not need to be tolerated.