42Below recycles cocktail waste into soap

In an effort to curb waste, Bacardi-owned vodka 42Below has launched a free initiative enabling bars in Australia and New Zealand to turn used cocktail fruit into liquid soap. 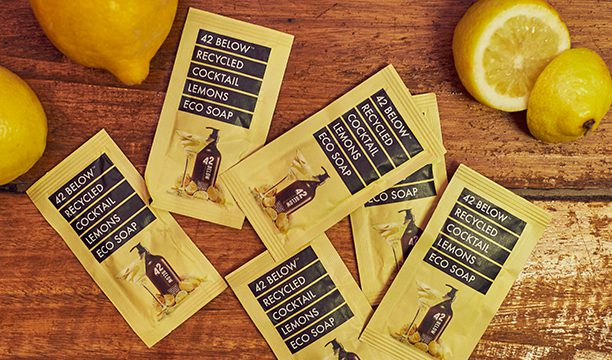 As part of the Bacardi Good Spirited initiative, old fruit, including lemons, is collected from participating bars and sent for processing into liquid soap.

The resulting soap is then sent back to the bars for use free of charge.

Sydney bar Stitch, part of the House of Pocket bar group, is one of those to join to the 42Below Recycled Cocktail Lemons Eco Soap initiative.

“We signed up to the eco soap initiative because it’s a simple idea which is easy to execute and great for the environment – really, the question should be why wouldn’t we,” says Christophe Lehoux, art and drinks director, House of Pocket.

“We actually do make a concerted effort to use as much of the fruit as possible – if not in the drink, then as a garnish – but if you count un-eaten garnishes I guess we would normally throw out a fair bit.

“To be honest, 42Below has made it incredibly easy. They provided the bags, they come and pick it up, then they bring the soap – we just need to put scraps aside. As for savings, since starting the programme in the last couple of weeks, we have we have saved on buying at least 25 litres of soap.

“The nice thing about this initiative is the customers get to experience it as well. Every customer goes to the bathroom at least once while they’re in the venue, so they can see the poster which explains it all and then use the actual soap – it’s really visual and practical.”

Last year Bacardi announced it would no longer use straws or stirrers at its corporate events citing a report claiming that if the 500 million straws used and discarded each day in the US alone, you would be able to wrap around the globe two-and-a-half times.