Ungava Spirits chairman Charles Crawford has apologised after the gin brand was accused of “stealing and exploiting” Inuit culture to sell its products.

The cultural appropriation claims relate to an animated advert released by the Nunavik-based brand in 2013 titled Discovering the Inuit in which a man’s voice can be heard chanting the word “Ungava” in the style of Inuit throat singing.

The brand has also been accused of sexualising Inuit by dressing female brand ambassadors in problematic costumes, and misusing Inuit syllabics.

“The video starts off with the image of a maple leaf, which kind of ties it to a Canadian national identity. There are no maple trees in the Arctic,” said Puskas.

“The boats they are using in the cartoon are not Inuit boats; we have kayak and umiak. They are also appropriating our throat singing, turning it into an ad to chant the product name. The voices singing are male voices, when throat singing is done by women. To me, as an Inuk, it was kind of glaring.”

Others, including Inuk throat singer Tanya Tagaq took to social media to express their views: 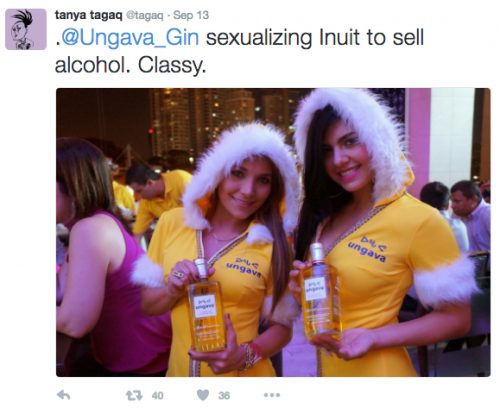 In a statement, Crawford said he is “truly sorry that we’ve offended the Inuit community”.

“We will be engaging key cultural influencers to gather explicit feedback on our use of Inuit symbology, and we are committed to being more culturally aware and sensitive in our advertising efforts going forward,” the statement reads.

Crawford’s statement has been largely welcomed, but many are calling for the company to go further.

“Instead of simply ‘respecting’ the region that differentiates you from all others, give back,” Tagaq continues. “Work with Inuit to build a proper and respectful advertising campaign. Then pay them. Sorry is good. Action is better.”

Recently, members of the Inuit community have expressed serious concerns about an advertising and promotional campaign that we ran in Europe in 2013. We recognize that the campaign crossed an important line and has offended many people. For that, we are deeply sorry and we will do better.

We will be engaging key cultural influencers to gather explicit feedback on our use of Inuit symbology, and we are committed to being more culturally aware and sensitive in our advertising efforts going forward.

Ungava is proud of our ties to the Canadian Arctic, and our brand identity is intended to celebrate the individuality of the region. The Ungava Peninsula at the northern tip of Quebec is the native home of six rare botanicals we use to produce Ungava gin, and there is no better place on earth to grow them. The decision to call our gin Ungava was always intended to pay tribute to the land from which the gin is produced, and to celebrate the unmistakable beauty of the Ungava region.

Although the campaign ended in 2013, we will review all of our owned media channels, including Facebook, Twitter and our website, to ensure any references to the campaign have been removed.

We are truly sorry that we’ve offended the Inuit community, as this was never our intent, nor does it align with our corporate values and beliefs.

Toronto-based drinks group Corby Spirit & Wine recently acquired Ungava Gin along with a number of other brands from Domaines Pinnacle, a Quebec-based firm for CA$12 million.