Based on the concept of “Mythology Mixology”, the 2015 edition is the 16th calendar in the collection and aims to celebrate the brand’s “unique and intriguing” history and the “intrinsic” stories related to 12 of its best-loved classic cocktails.

“We have a very personal connection to this year’s Campari Calendar as it is designed to celebrate the brand itself,” said Bob Kunze-Concewitz, CEO of Gruppo Campari. “The theme, Mixology Mythology, is really about exploring the whole personality of the Campari brand – past, present and future.”

For the first time ever, Campari employed the talents of a female photographer to shoot the calendar, Julia Fullerton-Batten.

Speaking at a Q&A discussion at the launch alongside Fullerton-Batten and Kunze-Concewitz, Green said: “It is such a beautiful calendar.

“It’s classic and quite funny because my mum has always been such a big fan of Campari and always had the Negroni cocktail, so it’s quite nostalgic for me – it reminds me of my mother.

“The January Negroni picture is one of my favourites because it was very romantic, but I also love the astronaut outfit as well.”

Just 9,999 copies of the calendar have been printed, none of which will go on sale but instead will be gifted to Campari fans.

“I definitely don’t see it ever being released for sale,” commented Julka Villa, senior director of global aperitifs, wines and cordial for Gruppo Campari. “It’s something from us as a gift, and will remain a gift in future.”

Click through to the following pages to see the 12 images and cocktails that make up Eva Green’s 2015 Campari calendar. 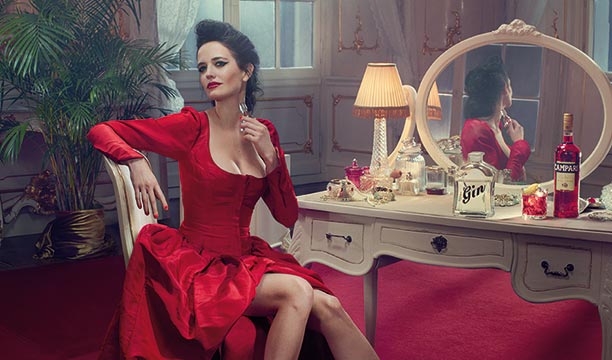 Wearing a gown by Vivian Westwood, Green depicts the origins of the classic Negroni, which is said to gave been created by Count Camillo Negroni himself in 1919 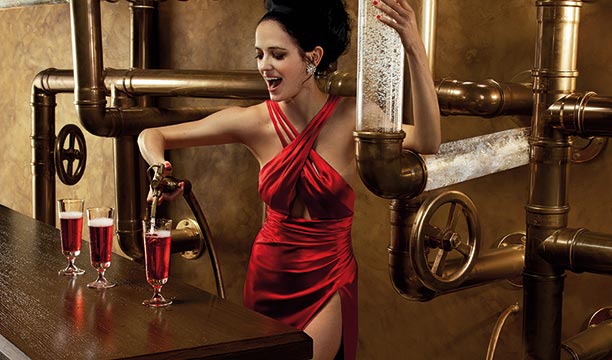 Here, Green playfully makes a batch of Campari & Seltz, surrounded by pipes of fizzing soda. The cocktail was the most popular drink in the Bar Camparino, opened by Davide Campari himself. 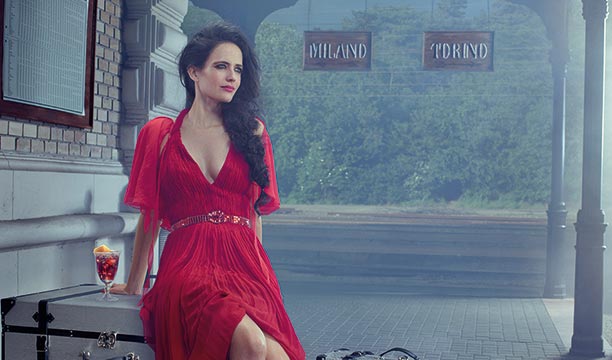 Wearing Andrew Gn cherry and John Galliano, Eva Green sips on a Campari MiTO, a mix of Campari and red vermouth, while waiting for a train. 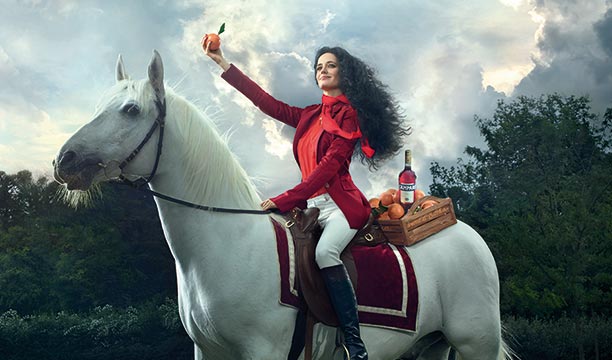 Said to be a cocktail which appeals to the feminine palate, Green celebrates Campari Orange. The cocktail was originally named after Garibaldi, an Italian soldier who fought for theItalian Unification Movement. The cocktail use of Campari from Milan and oranges from Sicily represents this. The colours are also reminiscent of the red uniforms of Garibaldi’s men, represented in Green’s outfit, and the Sicilian oranges. 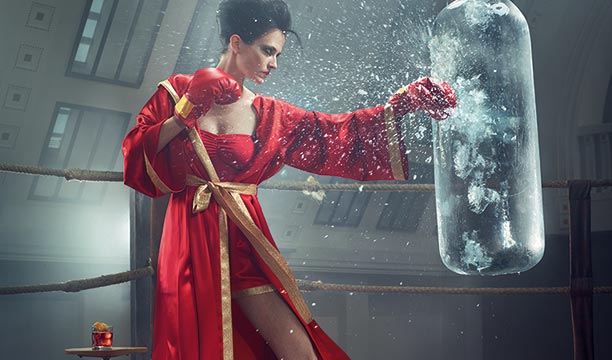 In this shot, Green depicts the origins of Campari’s Americano cocktail, which was first created in 1933 and is said to have been named after Primo Carnera, the first Italian to win the heavyweight boxing title in New York. 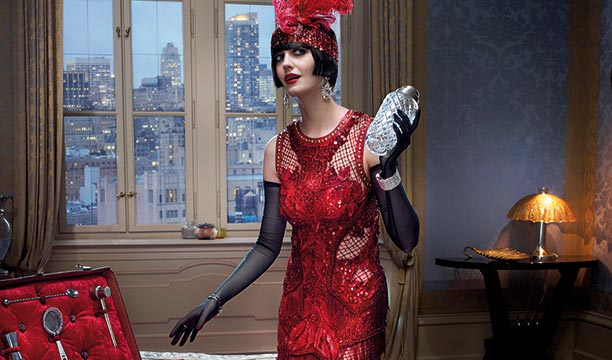 In a beautiful red flapper dress which typifies 1920s fashion, Green attempts to stow away the tools needed to make The Boulevardier cocktail. The mix, made of Campari, red vermouth and Bourbon, was invented by legendary US bartender Harry McElhone who fled his country during Prohibition. 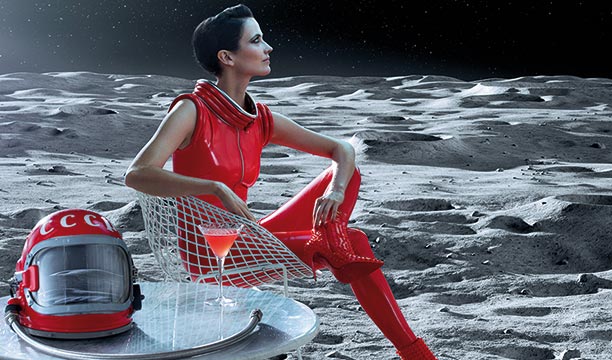 Created by the head barman of a famous hotel, July’s cocktail – the Sputnik – was made to mark the visit of a Russian diplomat, using vodka to celebrate the start of the famous Soviet space programme. 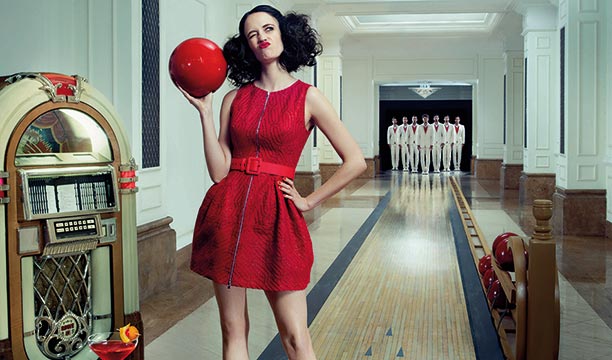 Green goes quintessentially American to convey the origins of the Old Pal cocktail, said to be a US version of the Negroni featuring rye whiskey instead of gin. 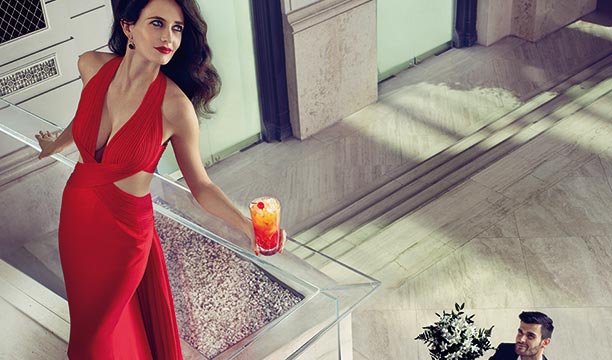 In this sultry shot, Green would rather enjoy a Campari Orange Passion – a modern twist on the Campari Orange featuring the additions of sugar, cherry and ice – than return the advances of the gentleman below. 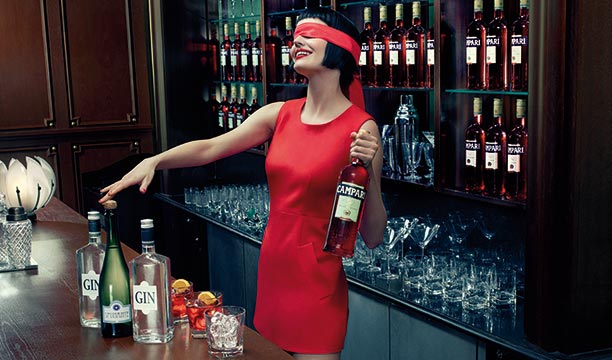 In a Diane von Furstenberg minidress, Green playfully conveys the origins of the Negroni Sbagliato. In 1972, a Milan bartender in the Bar Basso was asked to make a Negroni but used sparkling wine instead of gin, unwittingly creating a new classic. 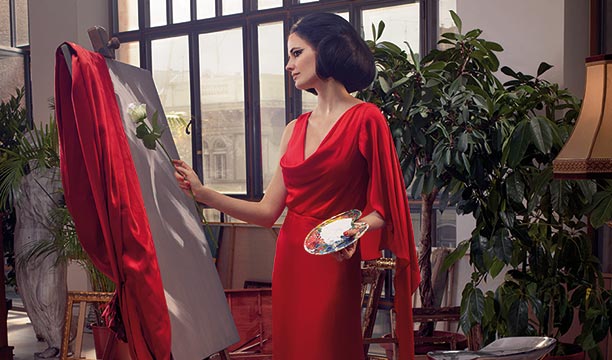 The star cocktail depicted in this shot is the Rosa Bianca, which was first created in the restaurant where members of the Futurist art movement used to meet, becoming one of their official drinks. A mix of Campari, rose liqueur, orange juice and anise drops, the cocktail is named after one of its original components, a spirit scented with white rose 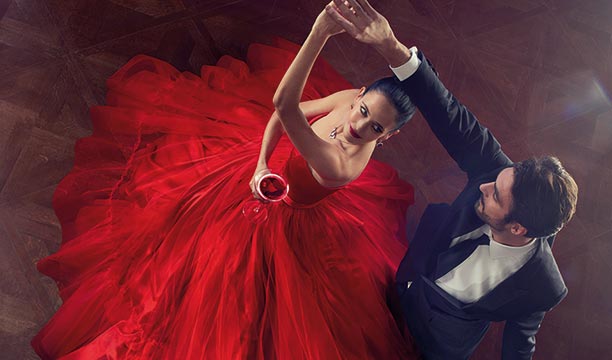 In a beautiful custom-made dress, Green holds a glass of Shaken Campari, which was created around the same time as Gruppo Campari in 1872.