The summer solstice may have passed and the nights may be drawing in, but there is still time to enjoy the last of the warm weather with one of these London pop-up bars.

The UK has already established itself at the forefront of the pop-up movement, but London in particular is making strong headway with the burgeoning trend

And the concept isn’t confined to independent bars; many revered brands are recognising the potential of pop-up bars and are producing equally eccentric venues for the warm weather.

Click through the following pages to see our list of the top 10 London summer pop-up bars still in action.

If you think one of your favourite London pop-ups deserved a place on this list, let us know in the comments below. 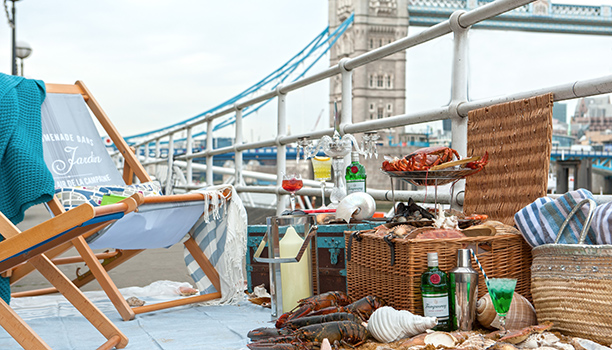 City dwellers longing for a slice of seaside serenity need look no further than La Pont de la Tour, which has transformed its Thames-side terrace into a beach-themed pop-up for summer 2014.

Decorated with deck chairs, shells and even a smattering of sand, Pont Plage takes its inspiration from the 1920s Riviera style of the restaurant.

An array of cocktails are on offer in keeping with the beach theme, including the Iceberg Martini, made from vodka, peach liqueur, blue caracao and

“We wanted to do something fun and light-hearted for our customers where they could come and escape after a hard day’s work,” said general manager Ricardo Mimoso. 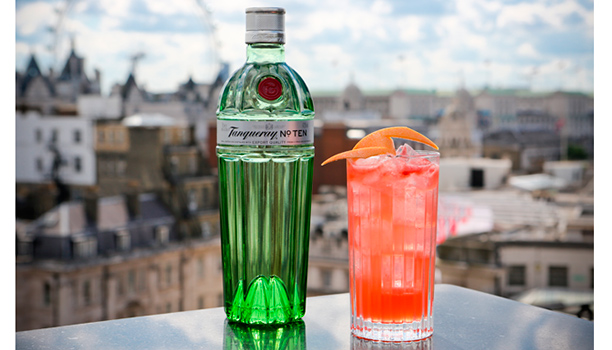 Weekly cocktail master sessions also take place each Wednesday, where visitors can learn how to create a selection of gin cocktails.

Tanqueray No. Ten Citrus Garden will be open until October 2014. 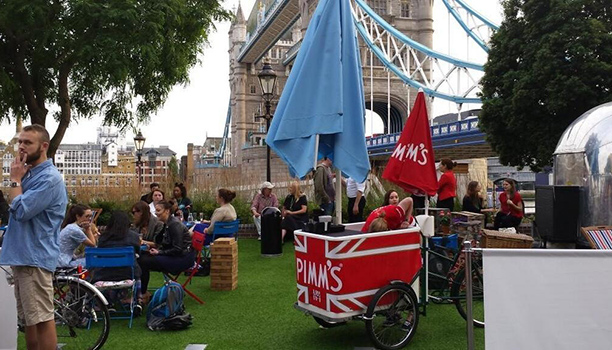 Riverside pop-up The Lawn, situated in front of The Tower Hotel, offers a bike bar serving Pimms and lemonade, street food from Camper Catering plus an abundance of cocktails.

For those with a bit more cash to splash and looking for an outdoor space to hire over the summer can rent The Lawn for three hours for £2,500. 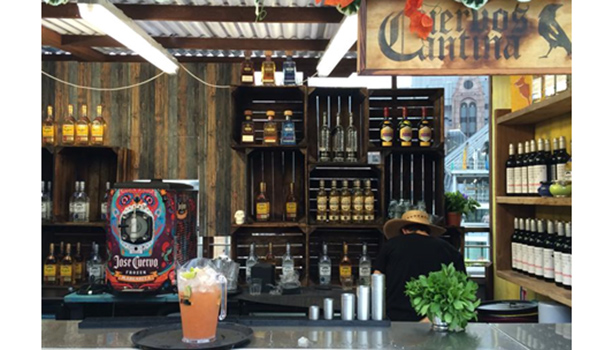 Pop-up bar Cuervo Cantina, brings a taste of Mexico to the heart of the City.

Located on the terrace of rooftop bar Skylounge in Tower Hill, gives city views looking out over the Shard and the Gherkin while offering guests a selection of classic cocktails from Frozen Margaritas and Mexican Mules to Tequila Sangrias. 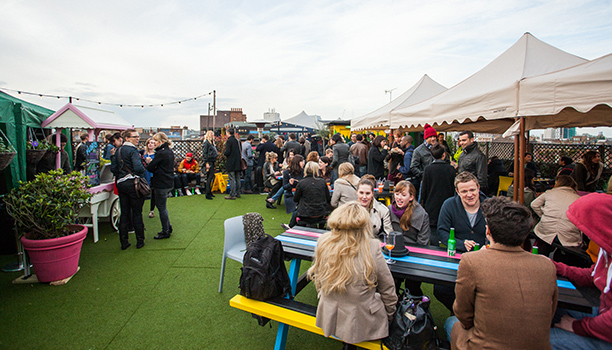 A canopy ensures that on days when the sun is scorching guests can shelter while enjoying the array of slushie cocktails available, or shelter from the unpredictable showers typical of a British summer.

The team at Queen of Hoxton also partnered with design company Gang of Six to bring the Whirl-oscope up to the roof – a carousel described as “a kaleidoscope of colour and light”. 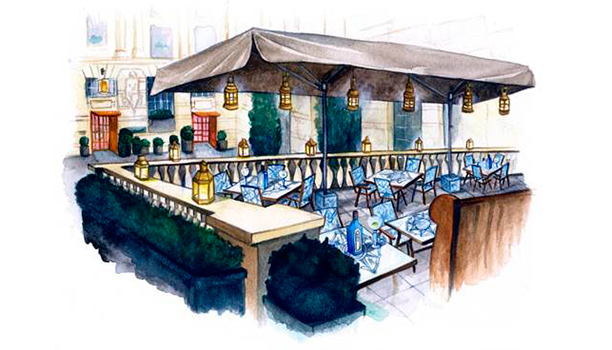 Nothing quenches the thirst of a hot summer’s day quite like a G&T, and those looking for a twist on the classic can do so at Bombay Sapphire’s Ultimate Gin & Tonic Terrace at Rosewood Hotel. 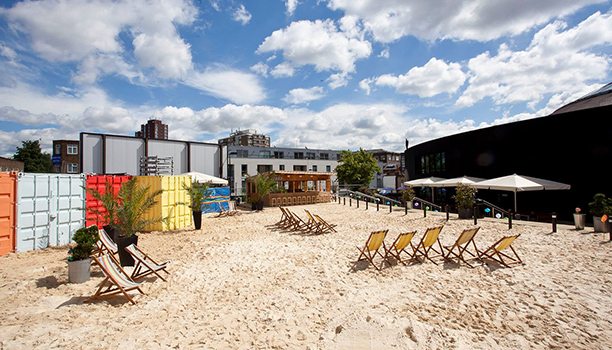 Nobody likes an overcrowded beach, so it’s a good job there’s a second sandy spot to escape to.

Boasting a space of 900sq metres and 150 tonnes of sand, visitors to Camden Beach can expect to enjoy beach huts, deck chairs and ice cold cocktails from the TIki Bar of Rum Shack-a-lack. 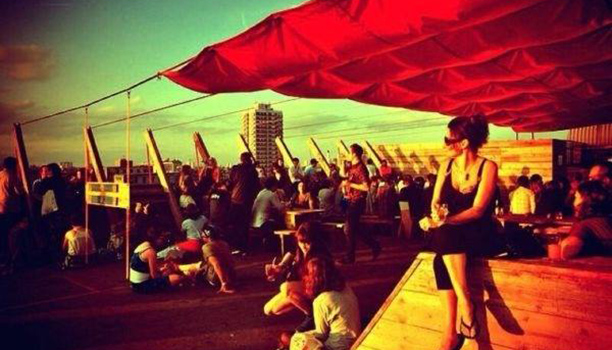 The roof of a multi-storey carpark might not be the most obvious location to position a bar, but Frank’s Café has proven it works and is back for another summer round.

A collaboration with Campari, the open-air venue has a separate cocktail bar so guests can be assured attentive service a broad selection of top tipples. 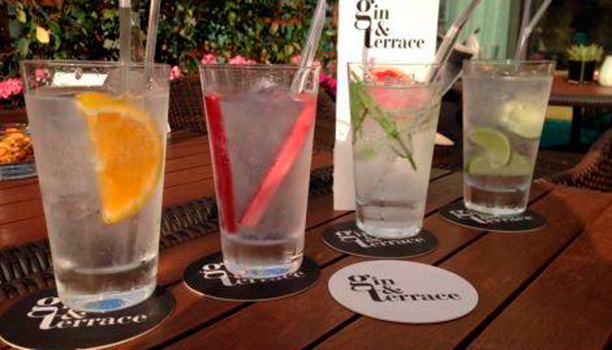 A new pop-up that launched back in July, Gin & Terrace is located at the Park Plaza County Hall near South Bank and showcases four independent gin brands in different Gin & Tonic styles.

Gin & Terrace will run until 7 September. 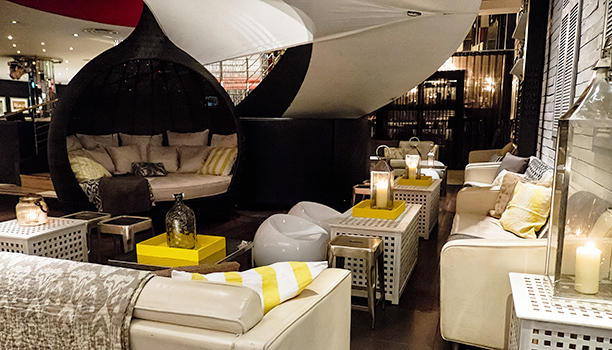 Late night venue Floridita launched Rum Island to bring the elegance of beach clubs found in Miami, Ibiza and The Hamptons for Londoners this summer.

With an extensive range of rums on offer, Rum Island’s cocktail menu has been crafted to highlight the spirit’s versatility with its range of Latin-America inspired drinks, such as the Watermelon Punch, a concoction comprising Brugal Rum, watermelon, Aperol Liqueur, cranberry juice, lemon juice and sugar served in a hollowed watermelon.

Rum Island will be open until the end of September 2014.