There’s a party going on in US spirits with producers pushing boundaries as never before. Tom Bruce-Gardyne investigates the latest craze for hybrid spirits

It’s not just the scale of the US spirits market that sets it apart, but the sheer pace of innovation, reckons Enda O’Sullivan, global brand manager at Sailor Jerry spiced rum. “Visiting Orange County, California, Austin, Texas or Manhattan, the level of experimentation and the rapid movement of trends is incredible. It’s kind of mind-blowing, and I don’t see any sign of it slowing down.”

Sailor Jerry now sells more than 700,000 a year, the vast majority in America, and has done so without adding a single flavour. That alone makes it highly unusual given the explosion in flavoured spirits which grew at four times the rate of non-flavoured ones in the US in the year to September 2012, according to AC Nielsen.

Like many, O’Sullivan credits America’s uniquely dynamic on-trade as the great innovator, for it is here that most new spirits trends are born. The trade surfed the wave of crazy new vodka flavours until the nation’s back-bar was bursting at the seams, and then seemed to tire of all that candy-coated cupcake excess. There have been fewer launches of late, and, according to research by Restaurant Sciences LLC, flavoured vodka is already in retreat in the American on-premise – down 11.7% in the year to September.

The trend for flavours has spread into new categories, particularly whisky, be it American, Irish or Canadian. Even Scotch has joined the party with last year’s launch of Dewar’s Highlander Honey – a flavoured whisky in all but name. Few believe it will be the last. Yet some producers are not content with simply adding a spoonful of honey or a sprinkling of spice to their spirits. Instead they are really shaking things up in the latest craze to hit the US spirits market, particularly in the on-trade.

Rather than leave it to bartenders to mix the drinks behind the bar, brand owners have started doing it for themselves and bottling the results. Boundaries between categories are being breached in a bid to create new categories. Among the weird and wonderful concoctions to emerge so far are rum and Tequila, Cognac and Moscato, and vodka and Sauvignon Blanc. The possibilities are endless.

One of the leading pioneers has been Pernod Ricard USA, whose SVP of spirits marketing, Pierre Berard, takes up the story: “We know that the millennial consumer is constantly looking for ‘new, now, next’ in the spirits world. Over the past three years, we’ve put forth several successful new products that helped fuel this hybrid trend,” he explains. “On the vodka front, Absolut really started this when we crafted our ‘blended’ flavours – Berri Açaí, Orient Apple and Grapevine are just a few examples.”

With its eye on the US club scene, Pernod released Malibu Red – a blend of the eponymous rum brand and silver Tequila, in March 2012. “Thanks to our creative director [the R&B singer] Ne-Yo, we amplified this tasty libation throughout his appearances, giving the product its own stage.”

Since the start, Ne-Yo has featured heavily in the brand’s advertising where he spouts the tagline: “Taste the smooth. Feel the fire.” With an RRP of US$16.99 and a strength of 30% abv compared to 21% for the mother brand, Pernod claims that sales of Malibu Red topped 100,000 cases in its first 18 months. “We’re finding broad appeal, particularly with multicultural consumers,” says Josh Hayes, senior brand director for Malibu in the US. “The idea that a product resides solely in one category is no longer true in consumers’ minds. People are more experimental than ever before.”

Millennial consumers tend to be fickle, easily distracted creatures who expect any drinks brand to offer the range of flavours and expressions you would find in Starbucks. Studying their drinking habits led Anheuser- Busch to launch Bud Light Lime-a-Rita two years ago. It seems consumers had been spotted tipping their cans of Bud Light into Margaritas, so the company decided to simplify the process. This 8% abv malt beverage is merely “Margarita-flavoured” and yet it shows an oblique attack by the American beer giant on the Tequila category.

But two can play at that game, and a pair of spirits brands have made a pre-emptive strike on the wine market. First came Courvoisier Rosé in 2011, followed by Absolut Tune which blends the eponymous Swedish vodka with New Zealand Sauvignon Blanc.

The ratio of vodka to wine is said to be 60:40, though the strength is diluted down to a mere 14% abv. During production the blend is injected with CO2 and wrapped in a foil cover which you have to unwrap from the waist up to reveal a glittering gold bottle with a Champagne stopper.

“Bubbles have always been associated with celebration, but the vodka element injects fun and makes Tune more appropriate for casual occasions,” said Shefali Murdia, Absolut’s senior brand manager. It also speeds up consumption, for, as every Champagne producer knows – once you pop that cork there’s no going back, the bottle has to be drunk before the fizz turns flat.

Whereas vodka, like any spirit, can be stored half-open for as long as you like. Berard calls the new brand “a category of its own,” and adds, “we’ve had great success with this product as we position it as a perfect brunch complement, as well as a hot new taste for the bottle service crowd”.

Meanwhile, the company’s arch rival, Diageo, is keeping schtum when it comes to these new category-busting spirits. Who knows what crazed mixology is going on behind the scenes, but so far the only public announcement has been about Jinzu. This blend of gin and sake created by British bartender Dee Davies won Diageo’s Show Your Spirit competition last May and will be joining Cîroc vodka and Johnnie Walker as part of the company’s Reserve Brand portfolio. Diageo has at least embraced flavoured whisky with Bushmills Irish Honey and Crown Royal Maple Finished.

As a category, flavoured whisky is one of the fastest growing spirits types in America right now, but it has not yet really explored hybrid spirits. An exception might be Red Stag’s new Hardcore Cider expression and, at a pinch, Wild Turkey Spiced, which first appeared last September.

Senior brand manager, Andrew Floor, describes it as “the first of its kind – a real category buster” and insists it’s “not some cynical attempt to gain extra shelf space, like so many line extensions”. The spices chosen were cloves and vanilla in a deliberate attempt to poach consumers from another spirit altogether. Not that William Grant’s appears too worried about Wild Turkey’s bid to seduce Sailor Jerry fans.

“If there’s excitement in the category, that’s good for everyone,” says O’Sullivan. Yet for a brand such as Sailor Jerry, he feels there’s a real risk in simply chasing a trend. And so does Brendan Buckley, innovation and category development manager at Irish Distillers, which recently launched Paddy’s Bee Sting and Devil’s Apple in the States.

Buckley believes these two new Irish whiskey flavours are recruiting drinkers from the flavoured vodka category, partly because consumers crave something more authentic. If so, flavoured whisky needs to tread carefully, he reckons. “There’s a risk that the whole category implodes in on itself by virtue of the absurdity of some of the things that might come out.” The same goes for all spirits – be they flavoured or hybrid.

Click here to see 10 of the most recent hybrid spirit launches. 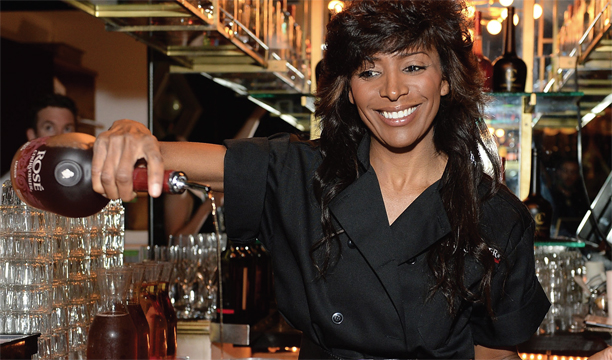 The 18% abv blend of Cognac and rosé wasn’t specifically aimed at wine consumers, explains Claire Richards, director of Cognac and world whiskies at parent company Beam Inc. “It was more about looking at how we broaden the appeal of Cognac which can be a very intimidating category, especially if you’re drinking it straight.”

With Cognac being distilled wine, diluting it with more of the same is perfectly OK reckons Richards. “It isn’t freaky, it’s not playing with nature.” As for the choice of rosé, and now Moscato in the latest version, Courvoisier Gold, they just happen to be two of the hottest wine styles in the States. At its peak, Moscato was growing at a staggering 78% in the US in 2011 according to Nielsen, and shares the same hip-hop connection as Cognac.

The lower alcohol level makes it less intimidating to new consumers than neat Cognac, and helps promote the idea of Courvoisier as a mixable spirit. It also significantly reduces the Federal and State tax. With a retail price of US$24.99, that means significant margins to reinvest in the brand if Beam Inc so wish.