Glenfarclas to swap casks with Hine

Speyside single malt Glenfarclas is maturing spirit in two former Hine Cognac casks as part of an exchange programme between the two companies. 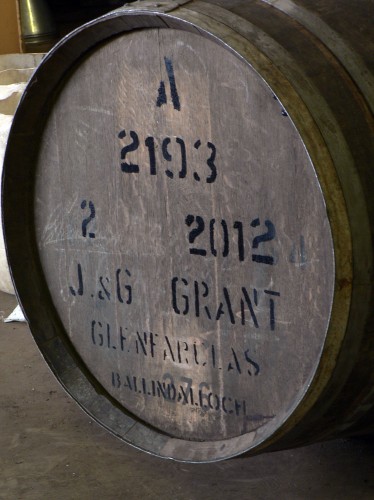 The two casks, which had previously contained prized Grande Champagne eaux-de-vie from the 1959 vintage, were filled with Glenfarclas new make spirit this week at the family-owned distillery near Ballindalloch.

In exchange, two empty Glenfarclas Sherry hogsheads filled in 2000 were recently shipped to Jarnac, where they were filled with Hine eaux-de-vie distilled from the 2011 vintage.

The plan, hatched by Glenfarclas brand ambassador George Grant and Hine cellarmaster Eric Forget, is to bottle the mature spirits in 2028, the year before Forget is due to retire.

“It all came about a couple of years ago,” explained Grant, the sixth generation of the family to manage Glenfarclas. “I was speaking to Eric and saying wouldn’t it be interesting if we did a swap of casks?

“I looked back at the warehouse records and we’ve filled all sorts of different casks over the years – Cognac, PX [Pedro Ximénez], Port. It just made sense – why aren’t we continuing to do this?”

The project could be repeated and expanded in future, Grant added. “I get on really well with Eric and would love to say to him in another two years, let’s do it again – maybe also with other people we have a relationship with.”

Hine, owned by CL World Brands, and family-owned Glenfarclas are both distributed in the UK by Pol Roger.