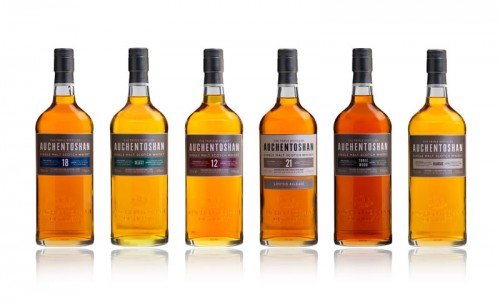 The launch of the four permanent expressions and the two limited editions which will be released each year was celebrated in style at London’s Skylon bar and restaurant in early March with a guided tasting from master of malts, Iain McCallum.

The Auchentoshan distillery was relaunched in 2007, but during the brand renovations, the travel retail range suffered due to a focus on the domestic market.

The launch of the new travel retail exclusive range marks the beginning of a new brand focus.

The theme of the travel retail range is oak and wood – something that is crucial to the quality of the spirit produced. The names of the products all hark back to the theme, and depict various stages of the growth and life of trees.

Rachel Barrie, master blender at Morrison Bowmore Distillers, commented: “The new Auchentoshan Travel Retail range brings the story of cask maturation alive, allowing the drinker to experience the distinctive influence of different casks from North America and Spain as well as the influence of age.

“We have created a range from exploration and discovery, from aperitif to digestif in style, soft and sweet to dark and delicious in taste.

“I am very excited to have the opportunity to share these intriguing and highly distinctive expressions of Auchetoshan with the world.”

The first, called ‘Springwood’ is a light and fresh “aperitif style whisky”, which McCallum likens to a “summer’s day in Scotland”. The second, a more generous whisky in terms of body, is called ‘Heartwood’, suggesting the ‘rich core or heart of the tree’, followed by the ‘Silverwood’, which is reminiscent of older more mature trees, and is described as the ‘perfect digestif whisky’. Finally there is the Solera , which is finished in Pedro Ximinez sherry casks, offering a rich and heady flavour courtesy of the sherry’s residual sweetness.

In addition to those four there is the 14 year old Cooper’s reserve – the only one to bear an age statement – a tactic that not only draws the consumer’s attention rather to the style and quality of the product, rather than the age, but also one that allows the brand to manage its stock effectively.

The brand, which prides itself on being the only Scottish Single Malt whisky to triple distil its spirit, as well as its focus on quality over quantity, is one of the smallest in Scotland.

As a small, craft distillery, rather than a massive commercial enterprise, Auchentoshan is very much à la mode in terms of whisky trends, as the popularity of boutique distillers continues to grow – even in markets such as the US. This is exemplified by an unprecedented – if slight – drop in sales for US whiskey giant Jack Daniels, according to McCallum.

While the new range represents the first major step in regaining ground in the travel retail arena, Auchentoshan is already a ‘top-10’ travel retail brand in Europe, and enjoys double-digit growth year-on-year within the sector.

The range is targeting consumers with a thirst for discovery and an interest in learning about craftsmanship and the differences that can appear in whisky.

David Wilson, sales & marketing director of Morrison Bowmore Distillers, commented: “Single Malts is one of the fastest growing sectors of travel retail, so we understand the importance of getting it right.

“We are extremely proud to launch this unique and differentiated range exclusively for the global traveller that taps into the pleasure of the single malt experience in a modern and relevant way. The careful attention and ongoing investment in our oak casks combined with our unique adherence to triple distillation has resulted in an exceptional range of quality malts.”

The range is available globally in a selection of international airports, terminals and border shops.