Sailor Jerry’s Christmas gifts for all 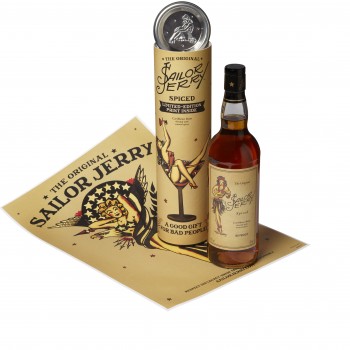 The prints show artwork from the prominent US tattoo artist, also known as Sailor Jerry, who inspired a generation of tattoo artists across the world.

The gift packs feature the artwork on the front along with other Sailor Jerry branding. There are only 6,000 gift packs in production currently available in the UK.

Tom Wade, senior brand manager for Sailor Jerry at First Drinks, comments: “We are committed to further grow the golden rum category and Christmas is a great opportunity for us to offer consumers something special.  Gifting is a massive area for retailers to exploit and it really helps encourage new drinkers in to the category.  In addition, with no premium on the price and selling at the usual RRP, this is a very attractive proposition for existing Sailor Jerry drinkers.”

Sailor Jerry, the UK’s 2nd largest golden rum, according to Nielsen (03.09.11). Golden rum is the fastest growing category is spirits, valued at £46 million, up 40% in value on a MAT basis. Golden rum is also worth 21% of the total rum market, and growing at three times the rate of the overall rum category.